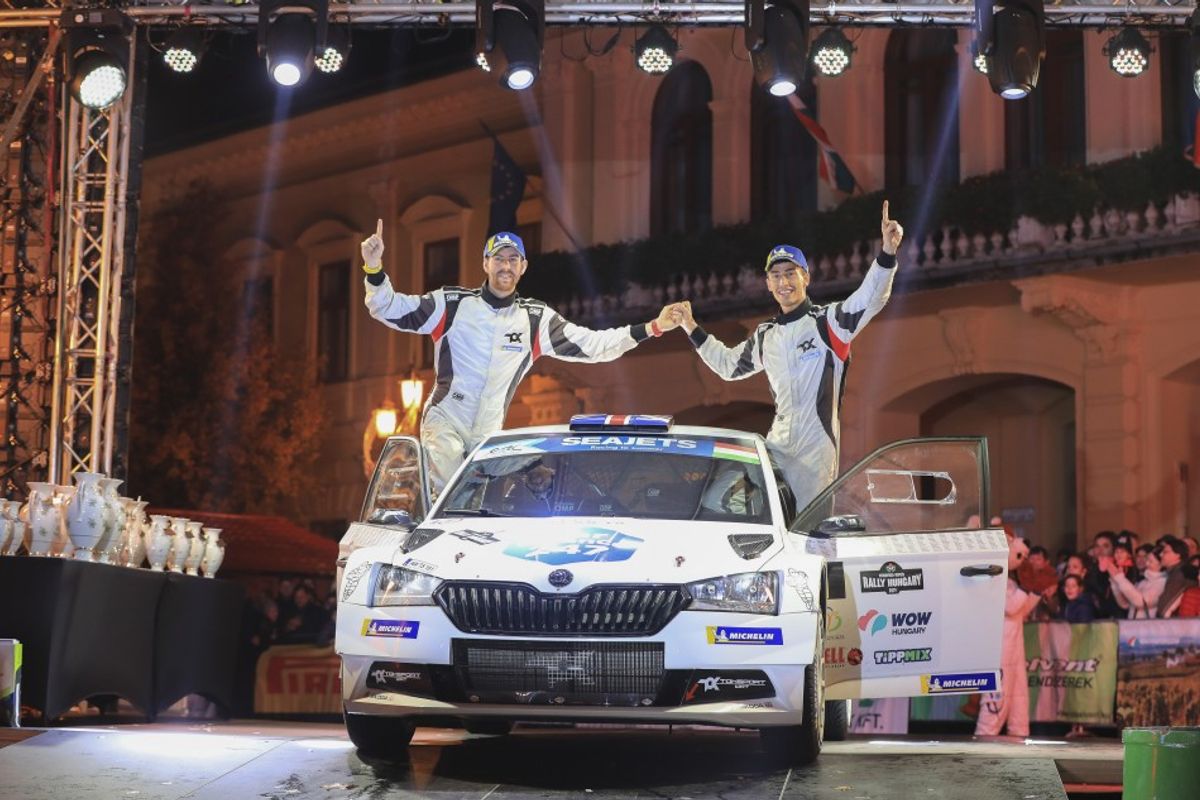 Toksport WRT’s Chris Ingram has become the first British driver to win the FIA European Rally Championship title for 52 years after finishing fourth in a dramatic season showdown in Hungary**.

Alongside co-driver Ross Whittock, the ŠKODA Fabia R5-powered Ingram overcame two tyre deflations – the second coming on the final stage of the event – and a spin to finish the season on 141 points, taking into account dropped scores and leg bonus points.

Saintéloc Junior Team’s Russian Alexey Lukyanuk finished second to rally winner Frigyes Turán after suffering his own puncture on the last test. He and co-driver Alexey Arnautov could only pick up two Sunday leg bonus points, and finished on 131 points, nine adrift of Ingram and Whittock.

Ingram came into the weekend 19 points ahead of Sports Racing Technologies’ Łukasz Habaj, and a further nine ahead of Lukyanuk, the reigning champion. With the best six results out of eight counting towards the championship, Ingram was set to lose 12 points from his end-of-season total, with Habaj and Lukyanuk potentially dropping four and three respectively.

But in a dramatic final stage, Ingram came through to clinch the crown as Frigyes Turán took the Rally Hungary victory, his first in the ERC to become the eighth different winner in as many rounds in 2019.

Ingram’s success completes his transition from rookie to overall champion in a space of six seasons. He began his FIA European Rally Championship adventure in a Renault Twingo, earning the Colin McRae ERC Flat Out Trophy on the Circuit of Ireland, only his second appearance, which ended in a huge crash. A chance with Peugeot UK followed before he was recruited by the ADAC Opel Rallye Junior Team. After losing out on the 2016 ERC3 Junior title on a final-round decider to team-mate Marijan Griebel in Liepāja, Ingram bounced back to take the crown the following season, this time ahead of team-mate Jari Huttunen.

That result helped Ingram secure a step up to ERC1 Junior for 2018 and he narrowly lost out on championship glory to Nikolay Gryazin at the end of his first campaign at R5 level. Despite limited finances – which had to be bolstered by a crowd-funding campaign launched by his mother plus the support of his Toksport WRT team – Ingram took the title battle to the final round, only to miss out on first place to Filip Mareš by 0.3s. But that defeat on Barum Czech Rally Zlín, which he completed leading the overall standings, served as a catalyst to a, at times, unlikely title push.

“It’s been a bloody hard road to get but this is everything to us,” said Ingram, a 25-year-old from Manchester in the UK. “Thank you so much to everyone who has helped us, everyone who has supported us. The support has been absolutely unbelievable and we are so grateful.  It’s been such a hard year but I’ve not done this alone. Ross has been unbelievable, he’s the most reliable guy, I’m a complete dope. But he’s the most focused person in the whole world. The team have been absolutely amazing. The car has been perfect. Thank you so much to them for making it happen.”

Lukyanuk’s final-stage puncture, meanwhile, denied him the event win and what have been a second title following Ingram’s drama ahead of him on the road. He settled for second as Callum Devine, driving a Hyundai Motorsport N-entered i20 R5, took third in his first ERC1 start made possible by backing from his national ASN, Motorsport Ireland.

Ekaterina Stratieva won the ERC Ladies’ Trophy for a third time with her Saintéloc Junior Team winning the FIA European Rally Championship for Teams ahead of Toksport WRT and ACCR Czech Rally Team.

Leg two report: Wet-weather master Lukyanuk denied at the last as Turán triumphs
Recently-crowned national champion Ferenc Vincze won Sunday’s opening run, the 10.60-kilometre Óhuta-Fony stage, as title chasers Lukyanuk and Ingram hit trouble with the Russian losing his rear brakes from the beginning and Ingram dropping “about 5 or 10 seconds” following a half-spin and a stall.

Things got worse for Ingram in the morning’s second stage as a front-right puncture early on forced him to stop for a replacement before continuing. He lost more than two minutes, which allowed stage winner Frigyes Turán to move into second behind Lukyanuk.

Heavy rain affected much of the early action with conditions proving the most demanding on the penultimate test before service (SS10) after which event organisers cancelled the second pass (SS14) for safety reasons.

Lukyanuk made it through the treacherous stage 10 with the fastest time and the Russian also topped the city stage in Nyíregyháza to take a lead of more than two minutes into the final loop of two stages with Ingram third behind Turan and a comfortable 1m38s ahead of fourth-placed Norbert Herczig, the MOL Racing Team’s four-time national champion, who would go on to claim his first stage win of 2019 on the penultimate test.

After suffering three punctures on Saturday, Herczig’s up-and-down home event ended with yet another deflation on the final stage as heavy rain, thunder and lightning tested the crews still further. He finished fifth in his Volkswagen Polo GTI R5.

As conditions worsened, Ingram came through with a front-right puncture, dropping him out of the podium places and seemingly handing the title to Lukyanuk. Incredibly, Lukyanuk was forced to stop and replace another puncture during the stage, dropping nearly two minutes and a place to second.

This promoted Turán to the lead, but attentions focused on how far down the Sunday leg positions Lukyanuk fell. The Russian could only score two points for being sixth fastest at the end of the leg, which left Ingram champion by a margin of nine points.

Sunday got off to a disappointing beginning for ERC1 Junior champion Filip Mareš, who failed to start SS8 following powersteering issues. The Czech federation-backed star, on the first of two prize drives from ERC promoter Eurosport Events for his championship success, was 6.8s from third starting leg two.

Erstwhile title contender Łukasz Habaj retired before the end of Saturday’s leg following powersteering and suspension issues, a sad end to a very impressive campaign for the Pole, which included winning the season-opening Azores Rallye.

ERC Junior regular Kristóf Klausz went off the road on SS9, while early rally leader Vincze also retired with a technical issue after suffering overheating problems and a puncture in his Korda Racing Team ŠKODA Fabia R5 on Saturday.

Turán celebrates maiden ERC win – by phone!
Frigyes Turán revealed he found out he’d claimed his maiden event win in the FIA European Rally Championship when he got a phone call from his team with the good news. Hungarian Turán admitted before the start that he’d be hard pushed to break into the top 10 in the final order due to his lack of familiarity with his ŠKODA Fabia R5, but ended up winning the event when long-term leader Alexey Lukyanuk, who was running behind him on the road, picked up a puncture on the deciding stage of Rally Hungary. “I was on the way to the service park when I got a call from the team that we finished third, but first,” said Turán. “I could hardly believe it. It took some time to realise it, and to tell you the truth, I was absolutely moved. It is awesome! I must admit that first I thought I did not really need that last stage because of the extreme conditions due to the fog. But now I think it was well-needed. Overall the race was fantastic, I love these stages, only the rain had some negative impact, but right now I think everything is much more than perfect. We are among those few drivers, who haven’t had any punctures, even if the conditions were really tough. I could not hope this kind of result, it is unbelievable.”

Czech federation-backed Cais wins ERC3 for secure second place in final order
Despite receiving a 20-second penalty for a late check-out from Saturday morning service while his team rushed to complete a gearbox change, Erik Cais completed a dominant first victory over Marijan Griebel, winning by more than seven minutes. Griebel was left to rue a lack of wet weather tyres as the conditions turned for the worse heading into Sunday’s second leg and adopted a cautious strategy to bring his Toksport WRT Peugeot 208 R2 home in a comfortable second position. A fresh downpour during SS9 meant that Cais took it relatively carefully as Saturday morning leader Miklós Csomós claimed the stage win. Conditions were far worse on the next test which allowed Cais to pull away further from Griebel behind. Csomós then took a popular city stage win in Nyíregyháza to end the loop on a positive note. After going off the road on the opening day, Ohran Avciouglu returned in his Toksport Peugeot but alternator issues affected his speed.

The ERC Ladies’ Trophy title battle took a dramatic twist over the course of the morning, as points leader Nabila Tejpar’s run came to an abrupt end on SS10. The British driver ran wide and hit a tree, rolling over as a result, although she and co-driver Hugo Magalhães were uninjured. Bulgarian Stratieva therfore knew that a finish would secure a third ERC Ladies’ Trophy title.

Joy and despair: Nucita is provisional ERC Abarth Rally Cup champion as Polonski retires
Andrea Nucita is the provisional ERC Abarth Rally Cup champion for 2019 after Dariusz Poloński retired prior to the start of Rally Hungary’s eighth stage this morning. Poloński effectively needed to win the one-make category for the Abarth 124 rally in Hungary with Nucita non-scoring in order to take the title and the 30,000 euros on offer to the champion. However, Poloński’s exit due to a suspected oil pressure issue means it was Sicilian Nucita who takes the spoils, subject to confirmation of the results. Local driver Mátyás Nagy, a rival to Nucita and Poloński in the ERC2 category, did not start leg two following myriad problems on Saturday.