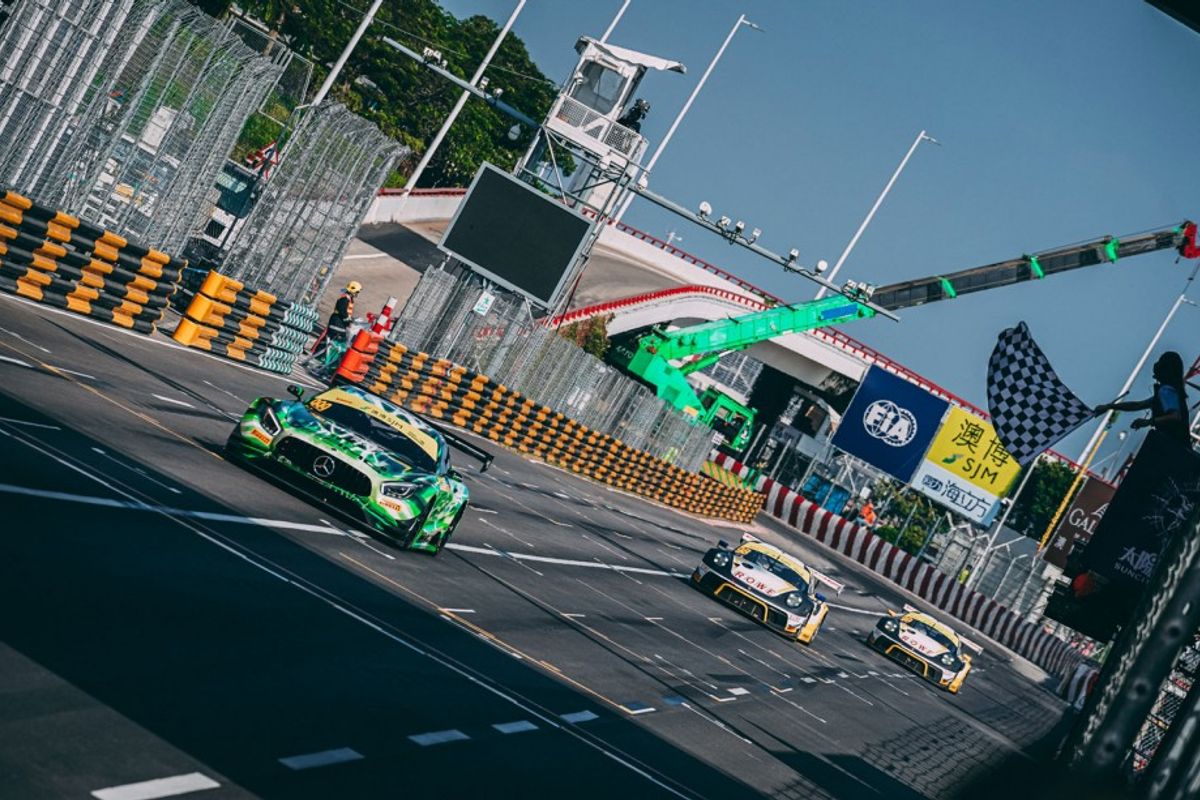 Polesitter Raffaele Marciello managed to keep fellow front-row starter Dries Vanthoor at bay once the race got underway, with the latter having to attack and defend in equal measure, with third-placed Earl Bamber running a close third.

Audi driver Vanthoor committed an error, however, running out wide and ending up in the wall on the outside of the Mandarin corner, causing the first safety car period of the race.

In an unrelated incident, fifth-placed Mercedes man Maro Engel also brushed the wall in the same place but managed to carry on, although losing places to Kelvin van der Linde and Edoardo Mortara.

When the action resumed, Mercedes-AMG Team GruppeM Racing’s Marciello stayed out in front, with the ROWE Racing Porsches of Bamber and Laurens Vanthoor running a close second and third.

Shortly after, Engel – running sixth – lost control of his AMG GT3 under braking into the Lisboa corner, brushed the back of van der Linde’s Audi and then went into the side of Mercedes-AMG Team Craft Bamboo Racing’s Mortara, taking both Mercedes’ out and bringing the safety car out for the second time.

Van der Linder managed to carry on, but eventually pitted his Audi and retired from the race.

Following the restart, Marciello lead the way with the Porsches running nose to tail in second and third.

At this stage, last year’s FIA GT World Cup winner Augusto Farfus was running fifth, having started down in 12th. He then launched a successful attack on the fourth-placed Audi of Christopher Haase and managed to gain yet another place.

In the closing stages of the 12-lap encounter Marciello had to work hard to keep the charging Porsches of Bamber and Vanthoor at bay, with the 991 GT3 Rs seemingly having an advantage in the twisty section of the circuit but then having no response to the Mercedes’ overall speed.

Marciello went on to win the race with Bamber and Vanthour completing the top three. Farfus finished a distant fourth, over five seconds further down the road, with Haase being the highest-ranked Audi in fifth.

The FIA GT World Cup at the 66th running of the Macau Grand Prix will take place at 12:25 local time on Sunday.

Raffaele Marciello said: “Today’s race is only a preparation for tomorrow. It’s important to start from pole but it’s going to be long race and the start will play a big role. After, it’s difficult to overtake and I’m really struggling in the last sector, so it puts us in a good position for the only part where they can pass. It’s an 18-lap race and many things can happen as we’ve seen today. Our goal is to win, everyone wants to win and it’s going to be really difficult but we’re in a good starting position. I need to do a good job but we’ll see tomorrow.”

Earl Bamber said: “We had a good start. It got a bit interesting at turn two when we had to avoid the Audi and then we were strong in different places of the lap. At the beginning of the lap we were a bit weak and then stronger through the mountain section. It was sort of cat and mouse; we would catch up at the beginning of the lap and then lose a bit later on. It was neutral so we didn’t really have the opportunity to pass. We will have to see what happens. Also, we have to watch out for the BMW so it’s going to be a tough one. I think this is the best start a Porsche team have had for many years and we have two of us at the front so let’s see.”

Laurens Vanthoor said: “We all have very different cars and we all have the pace in different places, so it’s very difficult to overtake. I saw BMW at the re-start passing the Audi on the first straight and then already getting very close to me on the next ones. This is something to watch out for tomorrow but we will figure something out and I will push until the end. The car is very good and we are well placed to challenge tomorrow.”