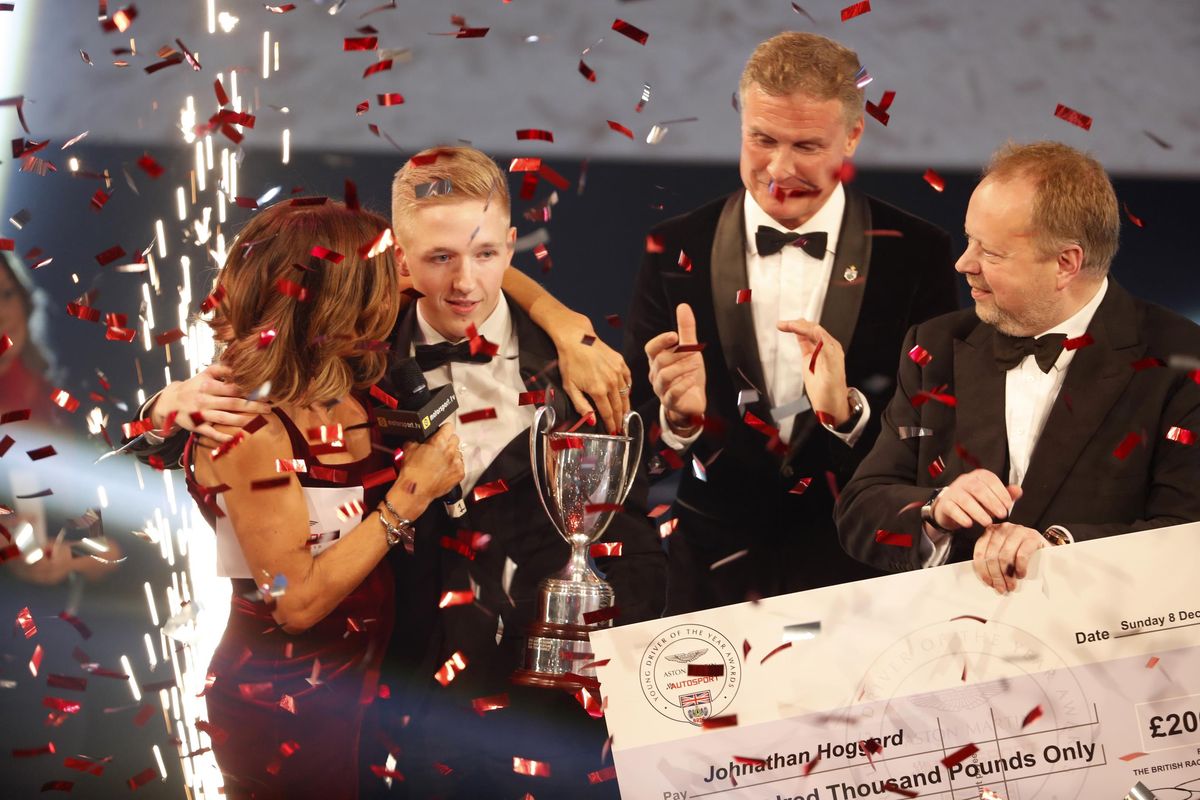 Aston Martin Lagonda has announces Johnathan Hoggard as the 2019 Aston Martin Autosport BRDC Young Driver of the Year Award winner. The 19-year-old Briton, from Spalding in Lincolnshire, was awarded the most prestigious honour in junior motorsport during the gala Autosport Awards ceremony held at the Grosvenor House Hotel, on London’s Park Lane, on Sunday evening.

Hoggard, who finished runner-up in the 2019 BRDC British F3 Championship with seven victories, earns a full test in an Aston Martin Red Bull Racing Formula 1 car on the Silverstone Grand Prix circuit, as well as a run in the Aston Martin Racing Vantage GTE FIA World Endurance Championship challenger. He also received a cheque for £200,000 presented to him by Aston Martin Lagonda President and Group CEO, Dr Andy Palmer, a full membership to the BRDC and an Arai crash helmet.

“I’m over the moon and a little lost for words,” said Hoggard. “It’s been over a month I’ve been waiting to find out about this [since the end of the assessment], and it’s been agonising. I’m thankful for everyone who’s helped along the way; family, sponsors, judges and the organisers Aston Martin, Autosport and the BRDC. I knew it was a very tough competition and it’s amazing to have actually won it. It’s a great honour and I’m very proud to have joined such a prestigious roll of honour.”

Turner said: “This year witnessed another exceptional crop of talent, with four very strong drivers fighting for the right to be the Aston Martin Autosport BRDC Young Driver of the Year. It was great to see them battling it out of over two days at Silverstone in what were actually quite difficult conditions. Without doubt this year’s winner was phenomenal in his approach, and every time he jumped into any of the cars he was bang on the pace. It’s been a real privilege to be back involved as a judge, and I am very proud that Aston Martin is now a part of the Award because I know how important a role it plays in the development of a driver’s career and what a difference it can make to their future.”

This year marked the first time in the 37-year history of the Award that Aston Martin Lagonda has been the title partner alongside the world-renowned Autosport media platform, which celebrates its 70th anniversary in 2020 and the British Racing Drivers’ Club, owner of Silverstone, the home of British motorsport and also Aston Martin’s High Performance Test Centre.

Aston Martin Lagonda, President and Group CEO, Dr Andy Palmer said: “We have said all along that the development of British talent is vital to the future of our motorsport industry, whether that be driving, engineering or design. Securing the next generation of British world champions helps shine a light on the thriving motorsport and motoring industry that we have in this country and of course it’s hugely important that continues. Johnathan is clearly an exceptional talent and nothing we saw over the course of this year’s Awards assessments suggests anything other than that he is on the path to a very bright future in the sport and we are hugely proud to be playing a role in his development.”