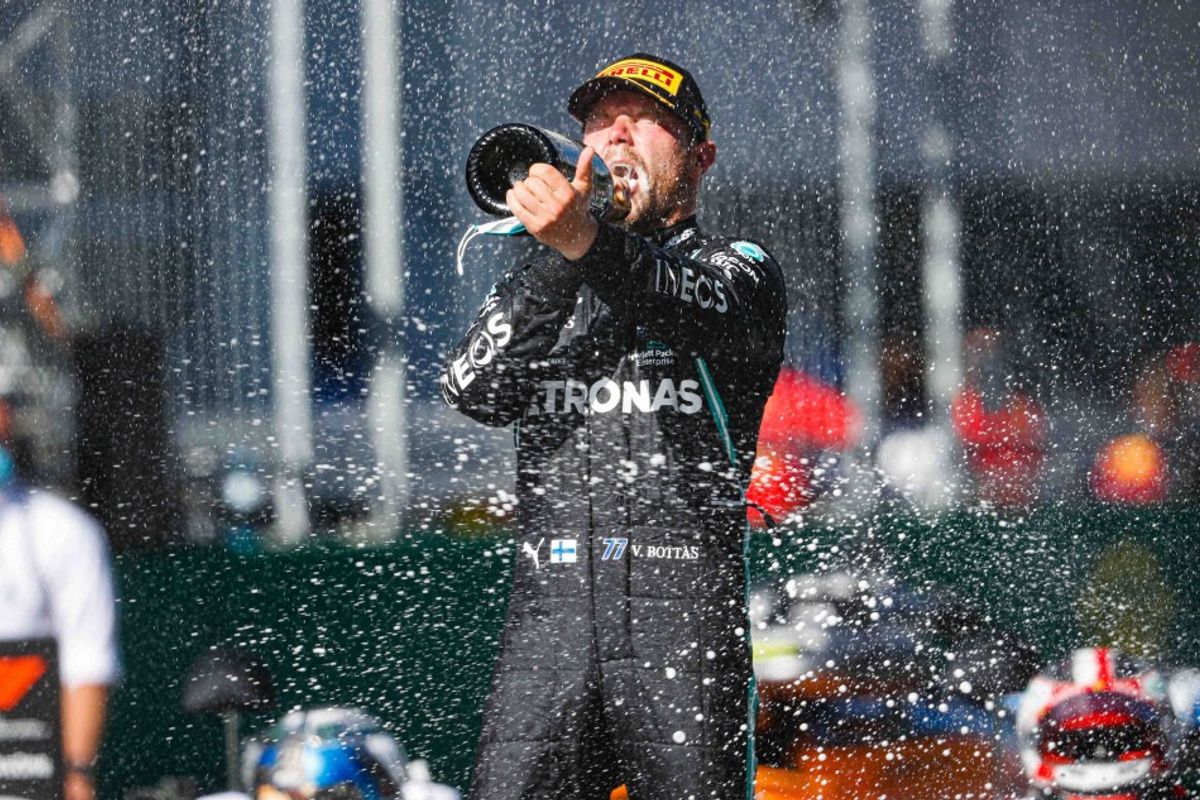 Valtteri Bottas took his first win of the 2020 season at the end of a dramatic race that saw just 11 cars take the chequered flag. Ferrari’s Charles Leclerc was a surprise second and McLaren’s Lando Norris took his first podium finish with third place on a day that saw both Red Bulls fail to finish their home race and Lewis Hamilton drop to fourth due a late race penalty for colliding with Alex Albon.

When the lights went out at the start, polesitter Bottas got away well ahead of Red Bull’s Max Verstappen, who started on the front row after Hamilton was handed a three-place grid drop for ignoring yellow flags in qualifying.

Verstappen was put under immediate pressure by Norris but managed to hold his starting spot. The McLaren driver duly slotted into third place ahead of Albon and Hamilton.

Albon began to apply pressure on Norris and on lap three the Red Bull man powered past the McLaren in Turn 4 to seize third place. On the next lap Hamilton also passed Norris on the following lap to continue his fight back from his grid penalty.

Albon spent the next part of the race defending hard as Hamilton applied pressure but on lap nine there was little the Thai driver could do as Hamilton got close in Turn 3 and then powered past on the run down to Turn 4.

Red Bull’s race got worse on lap 11 when Verstappen suddenly slowed dramatically into Turn 1. He managed to limp back to the pits at the end of lap 13 but despite attempts to correct the issue he was eventually forced to retire from the race.

His exit promoted Hamilton to P2, seven seconds behind his race-leading team-mate and Albon returned to third place, 3.8s ahead of Norris and Racing Point’s Sergio Pérez.

On lap 18, Daniel Ricciardo’s Renault was the next casualty. The Australian slowed and he trundled slowly to the pit lane where he eventually retired. Lance Stroll was suffering running slowly with what appeared to be power unit issues and he too was forced to exit the race at the end of lap 21.

At the front Bottas now had a five-second lead over Hamilton, with Albon a further 11 seconds behind in third. Norris was now fourth ahead of Perez and Ferrari’s Charles Leclerc was sixth ahead of the second McLaren of Carlos Sainz.

On lap 27 the Safety Car was deployed when Kevin Magnussen beached his Haas at Turn 3. The incident was the cue for the entire field to pit for news tyres. All except Perez opted for hard compound Pirelli tyres, with the Mexican instead fitting a set of mediums. As a result of the mass stop the order at the top remained unchanged, though the gaps closed.

The race went green again on lap 30 and Bottas held his advantage over Hamilton, with Albon looking secure in third ahead of Perez’s Racing Point.

On lap 52 the safety car made its second appearance of the afternoon when George Russell’s Williams expired. Alex took the opportunity to pit, taking on soft tyres, and he emerged in P4 behind Perez.

When racing resumed on lap 55 Albon was quickly on the hunt and when Perez locked up into Turn 3, Alex dived down the inside and re-took third place. The safety car immediately called back to action, though, when Kimi Räikkönen lost his front right tyre on the entry to Turn 10 and he was forced to park his Alfa Romeo on the pit straight.

When the SC left the track for the final time on lap 61 Albon quickly closed on Hamilton and, seeing a chance, attacked the Mercedes around the outside of Turn 4.

It looked as though the move would stick but on exit there was contact and the Red Bull spun into the gravel trap. Albon resumed in last place but on lap 69 his RB16 lost power and he was forced to pull over and retire.

Bottas went on to take his first win of the new season ahead of Hamilton, but the champion was handed a five-second time penalty as he crossed the line for the collision with Alex and so Leclerc moved to second place and Norris grabbed his first F1 podium finish. Hamilton finished fourth ahead of Sainz and Perez. Pierre Gasly grabbed AlphaTauri’s first points with seventh place, while Esteban Ocon eighth for Renault. Antonio Giovinazzi finished ninth for Alfa Romeo with Vettel taking the final point on a day when just 11 cars took the chequered flag.