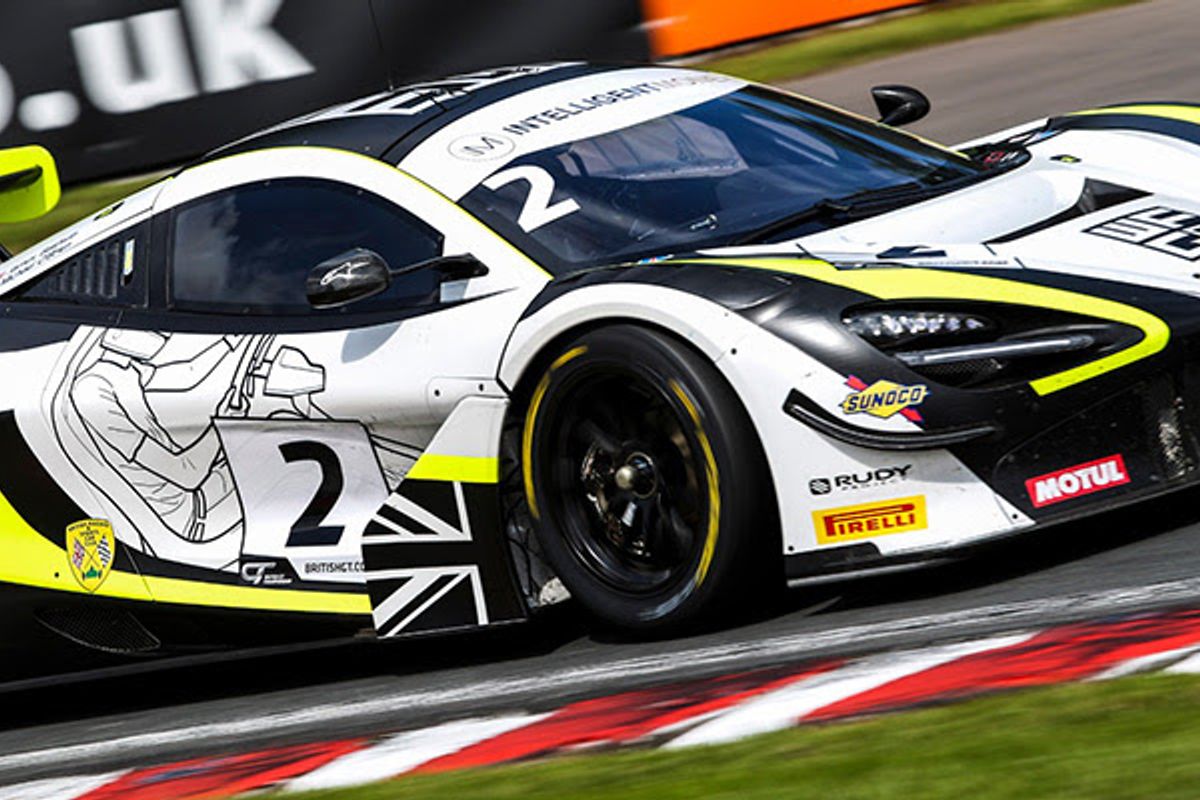 GT3
Blue skies greeted the teams for today’s first race at Oulton, which Lewis Proctor led away from pole position. He’d remain there throughout the opening stint but came under increasing pressure from 2 Seas Motorsport’s Jordan Witt who was tucked up under the Optimum McLaren’s rear wing when GT3’s pit window opened after 22 minutes.

While Proctor stopped at the first time of asking, Witt continued in the hope of undercutting the McLaren. Such was his pace that Jack Mitchell successfully emerged ahead of Ollie Wilkinson, who’d taken over from Proctor.

Behind, 2 Seas’ second 720S driven by Angus Fender was busy holding off James Baldwin who was seldom more than half-a-second behind throughout the opening stint, plus Rob Collard who jumped ahead of Sam De Haan at the start.

A straight fight in the pits went the way of Jenson Team Rocket RJN who sent Baldwin’s co-driver, Michael O’Brien, on his way just ahead of Dean Macdonald and Collard’s replacement in Barwell’s Lamborghini, Sandy Mitchell.

The trio emerged right behind second placed Wilkinson who was powerless to pursue race leader Mitchell. The latter's good work would ultimately be in vain, though, when a pitstop infringement resulted in 2 Seas’ #10 McLaren receiving a 10s stop-go penalty.

That handed the advantage to O’Brien who’d just passed Wilkinson on the approach to Hislops after the reigning Silver Cup champion bounced across the second of Brittens' high kerbs.

O’Brien was able to stretch his legs thereafter before a Safety Car was called with 10 minutes left on the clock. When it was withdrawn there would be time for just two laps, which O’Brien negotiated to claim a first British GT victory on his maiden GT3 appearance.

Indeed, Ian Loggie and Yelmer Buurman were best of the Pro/Am crews after beating Adam Balon and Phil Keen (Barwell), and ABBA’s Mercedes-AMG shared by Nearys Richard and Sam. Matt Griffin set fastest lap en route to ninth in AF Corse’s Ferrari. And Team Parker’s Bentley rounded out the top-10 ahead of 2 Seas’ other McLaren, which was penalised for a second time after speeding in the pitlane.

GT4
Connor O’Brien laid the foundations for TF Sport’s comfortable GT4 win by building a nine-second advantage over the chasing pack in his opening stint. But his and Patrick Kibble’s chances were boosted still further by Speedworks Motorsport whose short pitstop and resulting penalty dropped Sam Smelt and James Kell out of contention.

In truth Kibble was well clear anyway thanks to O’Brien’s mighty opening stint that also featured the class' Sunoco Fastest Lap of the Weekend.

Behind, Smelt did his best to hold on while gapping those behind. Instead, the best battle was fought between Patrik Matthiesen (HHC), Daniel Vaughan in TF Sport’s second Aston Martin and Academy’s Jordan Albert who briefly took third around the outside of Cascades before dropping back to fifth.

Speedworks’ subsequent penalty promoted Jordan Collard, now aboard the HHC McLaren, to second while Matt Cowley emerged ahead of Jamie Caroline. But the Academy Aston Martin’s potential podium chances came to an end when Cowley spun along Lakeside, which prompted a late Safety Car period.

Such was the Speedworks Supra’s pace that Kell and Smelt still finished in fourth position ahead of Gus Bowers and Chris Wesemael’s HHC McLaren and the Century BMW shared by Andrew Gordon-Colebrooke and Ben Hurst.