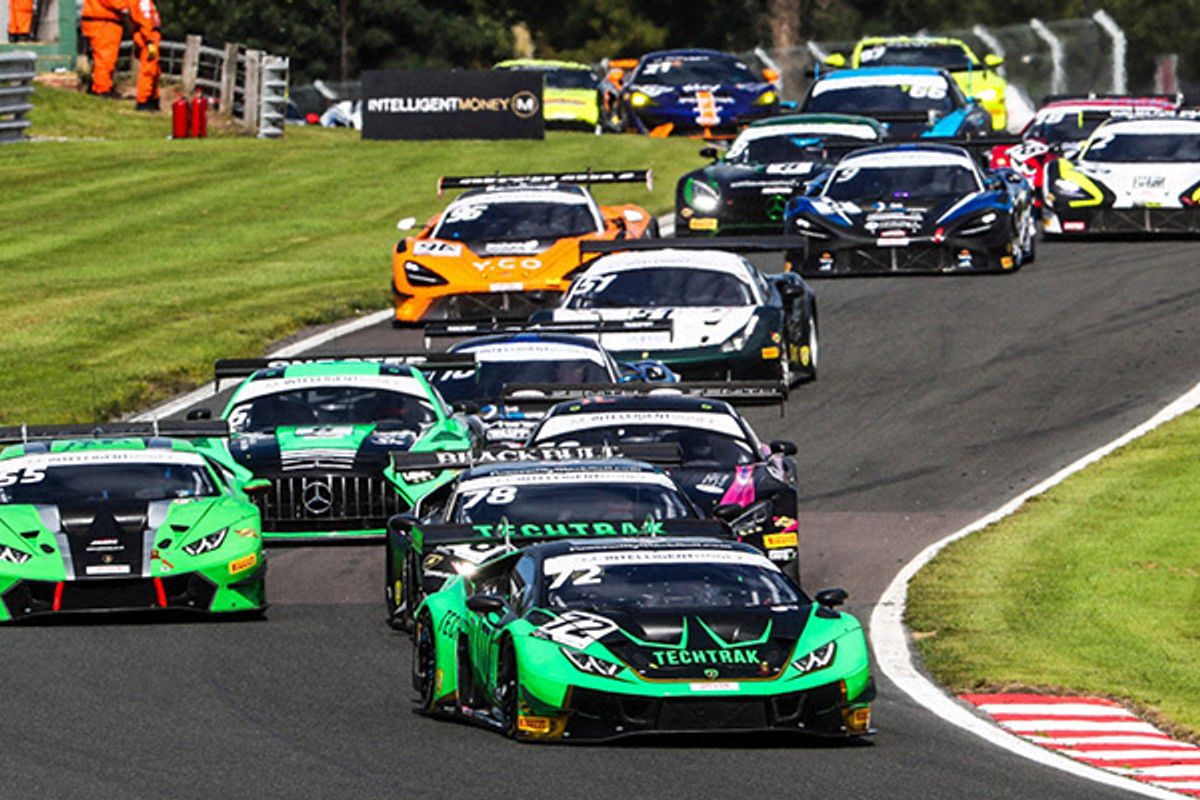 Adam Balon and Phil Keen returned to winning ways in the Intelligent Money British GT Championship at Oulton Park by leading home a Barwell Motorsport one-two in the second of today’s races.

The #72 Lamborghini Huracan was ahead of the sister car shared by Rob Collard and Sandy Mitchell when the race finished under Safety Car conditions. Sam De Haan and Patrick Kujala completed the overall podium after their team-mates Ian Loggie and Yelmer Buurman were handed a post-race 30s penalty in lieu of a drive-through for RAM Racing’s short pitstop.

GT3
Phil Keen drew level with Jonny Adam on 16 British GT3 victories by helping Barwell Motorsport lead from lights to flag in the second of Oulton Park’s two 60-minute races. The team’s Lamborghinis have now won at least once every year in Cheshire since the Huracan’s championship debut in 2016, although this one came with the added bonus of a perfect result.

Keen and team-mate Sandy Mitchell converted their front row grid slots into a comfortable one-two during the opening stint thanks, in part, to the fast-starting Marcus Clutton vaulting past both RAM Racing Mercedes-AMGs at Old Hall. Barwell’s duo – never more than three seconds apart – were 16 seconds up the road when Yelmer Buurman finally found a way past JMH Auto’s Huracan.

Clutton’s convoy was now headed by Patrick Kujala who had Dean Macdonald (2 Seas Motorsport) and Ollie Wilkinson (Optimum Motorsport) for company. Matt Griffin had also been part of that group early on before a tap from Speedworks’ GT4 entry broke the AF Corse Ferrari’s left-rear suspension.

Back at the front, Barwell opted to pit Mitchell’s Silver Cup entry early in the pit window, which opened after 22 minutes, whereas Keen – sharing with amateur driver Balon – tripped the pit-in beam with less than five seconds of his maximum stint length remaining. The audacious timing and Keen’s rapid sequence of in-laps helped his co-driver emerge with an increased margin over Rob Collard.

However, the showdown was cut short by a Safety Car triggered by one incident that uniquely scattered three cars – TF Sport’s #95 Aston Martin, the Team Parker Bentley and #9 2 Seas McLaren – around the circuit. The specific requirements for their removal – based on damage sustained, locations on track and the resources provided – were not immediately apparent and could not ultimately be met before the 60-minute race duration had elapsed.

Instead, Balon led Collard across the line behind the Safety Car, while De Haan – who’d taken over from Kujala – was classified third as a result of the sister car’s pitstop infringement.

Jamie Caroline found a way past pole-sitter Hankey at the start but was unable to establish a big enough gap that would negate his extra Success Penalty and Silver Cup time during the pitstops.

Race 1 winner Patrick Kibble remained glued to Hankey’s tail in TF Sport’s second Aston Martin throughout the first stint but, just like his team-mate, would have a Success Penalty to serve during the pitstops. Connor O’Brien climbed aboard for the second stint but was involved in an accident with Nick Jones’ Bentley, which resulted in a Safety Car.

Flewitt had by that stage assumed the lead and took the chequered flag ahead of Daniel Vaughan and Patrik Matthiesen, the duo and their respective co-drivers Caroline and Collard now tied at the top of the early championship standings.

HHC’s second McLaren finished fourth in the hands of Gus Bowers and Chris Wesemael, one place ahead of Andrew Gordon-Colebrooke and Ben Hurst’s Century BMW. Academy’s Jordan Albert and Matt Cowley rounded out the top-six.