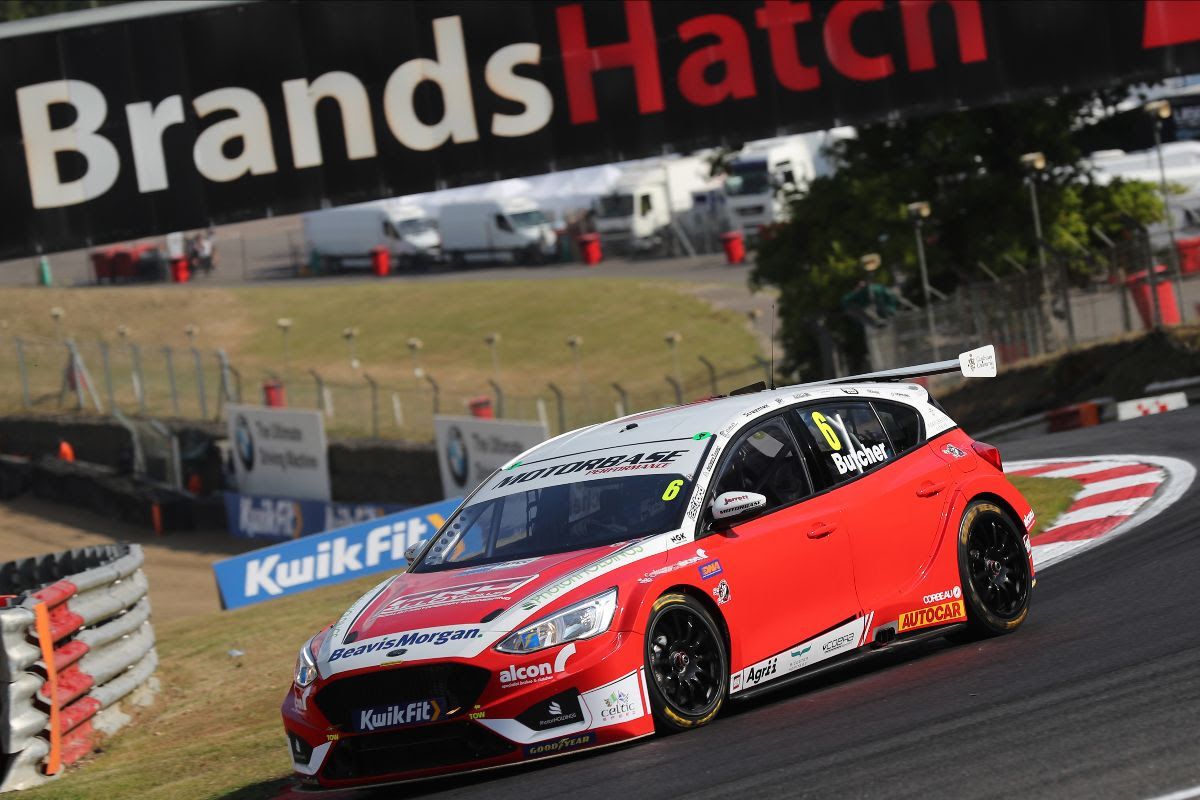 Motorbase built and prepared three Ford Focus STs during the off-season and Butcher continues to show the speed and potential of the all-new machines. Having set the fastest lap time during a recent pre-season test at Snetterton, the Scotsman duly followed that up with a double podium at the Donington Park curtain raiser last weekend.

Buoyed by that recent form – amidst sweltering temperatures at the legendary Brands Hatch GP circuit – Butcher banked his benchmark 1:31.111s lap early in the session and it wouldn’t be beaten for the remainder of the running.

It soon became a double celebration for the Kent squad as Ollie Jackson secured a sensational third place on the grid for tomorrow’s opening race – his best ever qualifying position by some distance having previously held a career-high of eighth.

Halfords Yuasa Racing’s Dan Cammish was completing his first competitive laps of the fantastic 2.43-mile GP circuit since his now infamous title challenge ended in the barrier with just over a lap of the 2019 season remaining. The super-talented Honda racer immediately buried those memories, however, by squeezing his Civic Type R in-between the two Fords and onto the front row of the grid – impressive considering the success ballast being carried onboard his #27 machine.

Jake Hill topped both Free Practice sessions earlier in the day and the MB Motorsport accelerated by Blue Square driver was a constant threat during qualifying. Such was his pace throughout Saturday, that the local driver was left slightly frustrated to only take fourth in the order. It has been an extremely encouraging day for Hill and his team, however, as they look to bounce back from a challenging opening weekend at Donington Park.

The top four cars on the grid were separated by just 0.055s, highlighting the competitiveness at the head of the field.

The Team BMW duo of Colin Turkington and Tom Oliphant had to make do with fifth and sixth respectively, albeit also with significant success ballast on board the two 3 Series’, but the pairing will surely be contenders come race day. Incredibly, the two BMWs set exactly the same lap times during the 30-minute session.

Senna Proctor (EXCELR8 Motorsport) and Tom Ingram (Toyota Gazoo Racing UK with Ginsters) produced solid laps to end up seventh and eighth in the classification, but both were unable to display top-level one lap pace. Both the Hyundai and Toyota outfits have been towards the sharp end of proceedings so far, but are falling short of a front row challenge at this very early stage of the season.

BTC Racing’s Josh Cook and Tom Chilton completed the top ten positions as they focus on collecting points while the team continue to develop its stealth grey Hondas over the coming weeks.

Rounds 4, 5 and 6 of the 2020 Kwik Fit British Touring Car Championship take place on the Brands Hatch GP circuit tomorrow (9 August) with all the action being screened live and exclusively on ITV4 from 1020.

Rory Butcher said: “I was so focused. I believed going into that session I could fight for pole, I really fired myself up and I think I gave everything on that one lap. I don’t think I had anything else in the tank for the second run; you saw everything there.

“The car from the moment we drove it in our first test in March, it was giving me the feedback that it was a competitive package and we didn’t get the most out of it during qualifying at Donington, but I’ve put things right here. First pole position in the new car feels fantastic and I think it just shows what a fantastic job everyone in the team has done designing and building this new Ford Focus ST.

“It’s going to be very difficult in the heat, laying down 2/3 laps like that isn’t easy and, in the race, when you’ve got pressure from the guys behind in your mirrors, it’s only going to make it worse. But I think the key is to stay cool, keep hydrated and try to last the whole day.”

Dan Cammish said: “I’m not going to lie, the first lap out of the pit lane this morning, I had a lump in my throat driving past Hawthorne. I had a good look at the gravel trap and a big deep breath and that was it, we’ve moved on and off we go now. It’s behind me, that was then and this is now. I’ve got a great car under me – a fast car, a great team who’s really supportive and we’re out there giving it our all. There’s no time to dwell on the past in this game, not when you’re up against these guys!

“I’m slightly disappointed. I’m really happy to be second, but can somebody tell me how many times I’ve missed pole by the smallest of margins? I seem to start second quite often by very little. It was a great lap from Rory, I gave it everything. I’ve got to be happy; when you’re dragging 54kg round, you’re going to feel it. So I’m really happy to be starting at the front end and it sets us up well for a positive day.

“Two years ago we won the second race with 75kg, and I think I’m better than then, as is the team, as is the car, so we’ll give it our all tomorrow.”

Ollie Jackson said: “I think my best up until now was eighth last year. It’s been a bit of a funny old day, I struggled a little bit in the free practice sessions, struggling to find the balance and wasn’t that happy with the car. We’ve just come into qualifying, put a fresh set of slicks on it and it’s just been mega, the team’s done a fantastic job. It’s a great result for the team.

“There’s always pressure in the BTCC, it doesn’t matter where you start, and it’s always close. But to have such a great qualifying, it’s a great start to the weekend, it puts us in a safe position to have a really good day out tomorrow.

“I always drive my own races and go for the results I think I can achieve, so it’s great to start in P3. Ultimately we’ve got the pace to be up there so we’ll see what happens.Tomorrow is a different day but we’re in a strong place.”