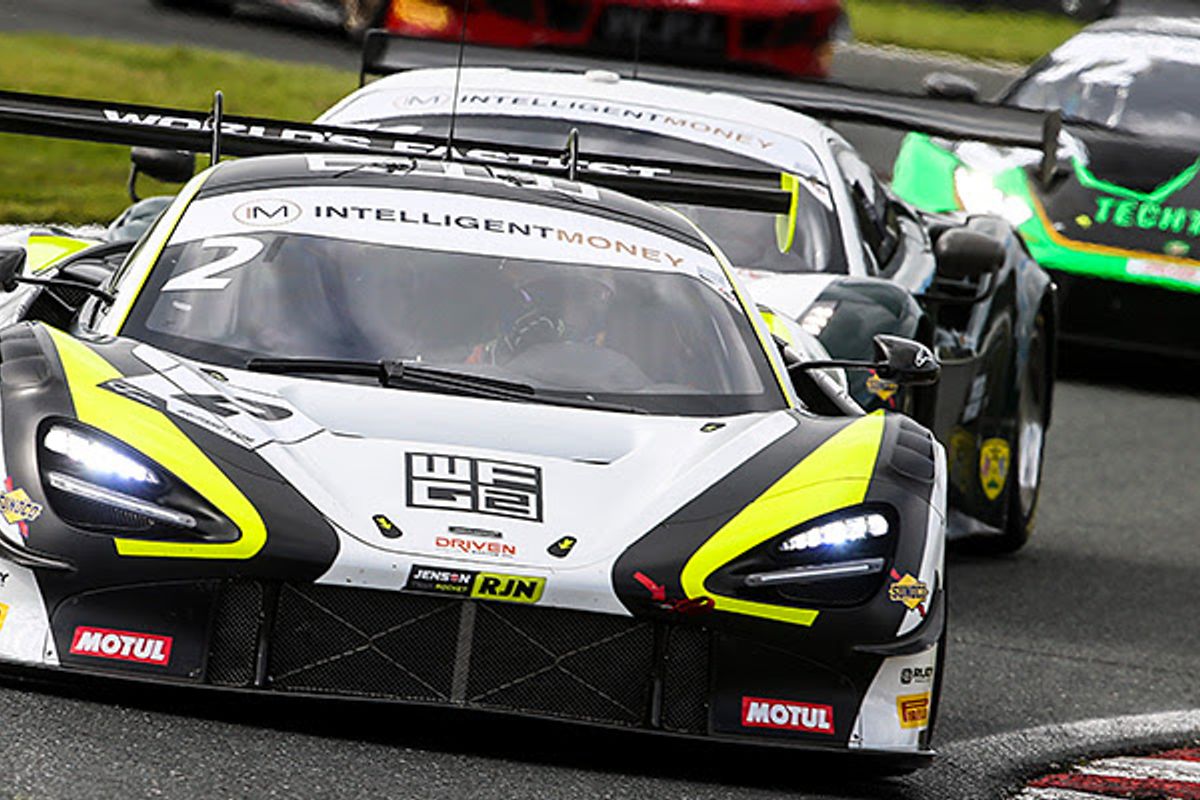 Not since 2007 has the Leicestershire venue staged two British GT races during the same meeting, while a break from series tradition – brought about by the revised calendar – sees one and two-hour contests take place on Sunday. The first – featuring a mandatory refuelling pitstop – awards the maximum 1.5x points, while the second reverts to the same 60-minute sprint rules used at Oulton Park at the start of August.

The unique format also calls for a slightly different qualifying method. Race 1’s grid is decided by the usual endurance regulations where the best time of each crew member is combined to determine a starting order. Fastest Q2 laps then set the grid for Race 2.

Few would have picked an esports champion and GT4 graduate to be leading the championship after round one. But that’s exactly the situation atop the early GT3 standings thanks to James Baldwin and Michael O’Brien who belied their inexperience to win Race 1 and score useful points in the second. What’s more, Jenson Team Rocket RJN also enter Sunday’s first race without a Pitstop Success Penalty, which rise to 20, 15 and 10 seconds for British GT’s endurance format.

The same can’t be said for either of Barwell Motorsport’s Lamborghinis, which lie second and third after scoring a one-two in Oulton’s second race. Adam Balon and Phil Keen – also the leading Pro/Am contenders – and their team-mates Rob Collard and Sandy Mitchell must therefore remain stationary for an additional 20 and 15 seconds at half distance. There’s also the small matter of Barwell’s supposed Donington curse, which has afflicted its championship challenges in the past. The team will be hoping a change of date and the addition of a sprint race – a format Barwell has traditionally excelled in – can break the spell this weekend.

Elsewhere, both 2 Seas Motorsport entries would have scored more heavily at Oulton without separate incidents scuppering their chances. An unfortunate case of wrong place, wrong time ended Angus Fender and Dean Macdonald’s chances of adding to their Race 1 podium, while a penalty denied Jack Mitchell and Jordan Witt an almost-certain victory earlier in the day.

It was a similar story for Ian Loggie and Yelmer Buurman who left Oulton seventh in the standings. However, the combination of a longer endurance race and no Success Penalty marks out RAM Racing’s Pro/Am Mercedes-AMG as a serious overall contender this weekend.

‘What-ifs’ also apply to AF Corse’s Ferrari, which would have been somewhere near the podium places were it not for an errant GT4 car, and WPI Motorsport whose weekend was compromised by a suspension issue in qualifying. This weekend sees Michael Igoe joined by Lamborghini Squadra Corse factory driver Andrea Caldarelli.

Elsewhere, while standout results eluded them, both Richard and Sam Neary (Team ABBA Racing), and Nick Jones and Scott Malvern (Team Parker Racing) showed plenty of promise in round one. Indeed, 18-year-old Neary Jnr – up against experienced factory Pro drivers – was particularly impressive during his first British GT weekend.

GT3’s entry is also boosted by the return of Balfe Motorsport’s McLaren, which makes the first of three scheduled appearances in the hands of Stewart Proctor and Joe Osborne.

Meanwhile, the four Silver Cup-entered McLaren crews will serve longer pitstops this weekend as part of British GT’s performance balancing measures. Rather than carrying excessive ballast, their mandatory pitstop times will increase by eight and four seconds in Race 1 and 2, respectively. Similar measures have been used to successfully balance GT4’s Pro/Am and Silver Cup classes in recent years.

Neither of the joint-leading crews won a race at Oulton. Instead, a pair of podiums for Jordan Collard and Patrik Matthiesen, and Jamie Caroline and Daniel Vaughan see the HHC Motorsport and TF Sport drivers enjoy a two-point cushion over the chasing pack.

Second and third for Collard and Matthiesen was perhaps the best they could hope for at a track where TF Sport’s other Aston Martin appeared to have the upper hand all weekend. Nevertheless, it is the Anglo-Danish crew’s consistency that has kept the McLaren on top of the pile. What’s more, their Success Penalty will be five seconds shorter than that of Caroline and Vaughan who finished just ahead of them in Race 2.

The top step was filled by Mia Flewitt and Euan Hankey who lie two points behind the early leaders. Flewitt’s victory was the first by a woman in British GT since Flick Haigh at Brands Hatch in 2018 but one that also carries a caveat of the full 20-second Success Penalty in Race 1. Some of that will be negated by the longer minimum pitstop time served by hers and Hankey’s Silver Cup rivals, while current championship leaders Collard/Matthiesen and Caroline/Vaughan will have an additional 10 and 15-seconds on top of that.

Those factors leave the door ajar for two entries that shone at Oulton and whom will compete time penalty-free on Sunday morning.

Connor O’Brien and Patrick Kibble marked themselves out as firm championship contenders with a pole position, lights-to-flag victory and fastest lap in Oulton’s opener before an accident denied TF Sport’s #95 Aston Martin another strong points’ haul in the second.

Speedworks’ new Toyota Supra also looked the part, and – especially in the hands of Sam Smelt – was frequently O’Brien and Kibble’s closest challenger in terms of raw pace. Indeed, fifth in the early championship standings doesn’t do justice to this entry’s potential.

Likewise Jordan Albert and Matt Cowley whose Academy Mustang – a race winner at Donington last season in the hands of Multimatic – missed out on a likely podium at Oulton. As such, the pair find themselves behind the more consistent Chris Wesemael and Gus Bowers (HHC), and Andrew Gordon-Colebrooke and Ben Hurst (Century).

LIVE COVERAGE
Both British GT races will be shown live on the championship’s Facebook page and website, plus SRO’s Twitch and GT World Youtube channels, this Sunday. Coverage begins 15 minutes before each race.

Sunday’s support races will also be shown live on britishgt.com/live throughout the day.