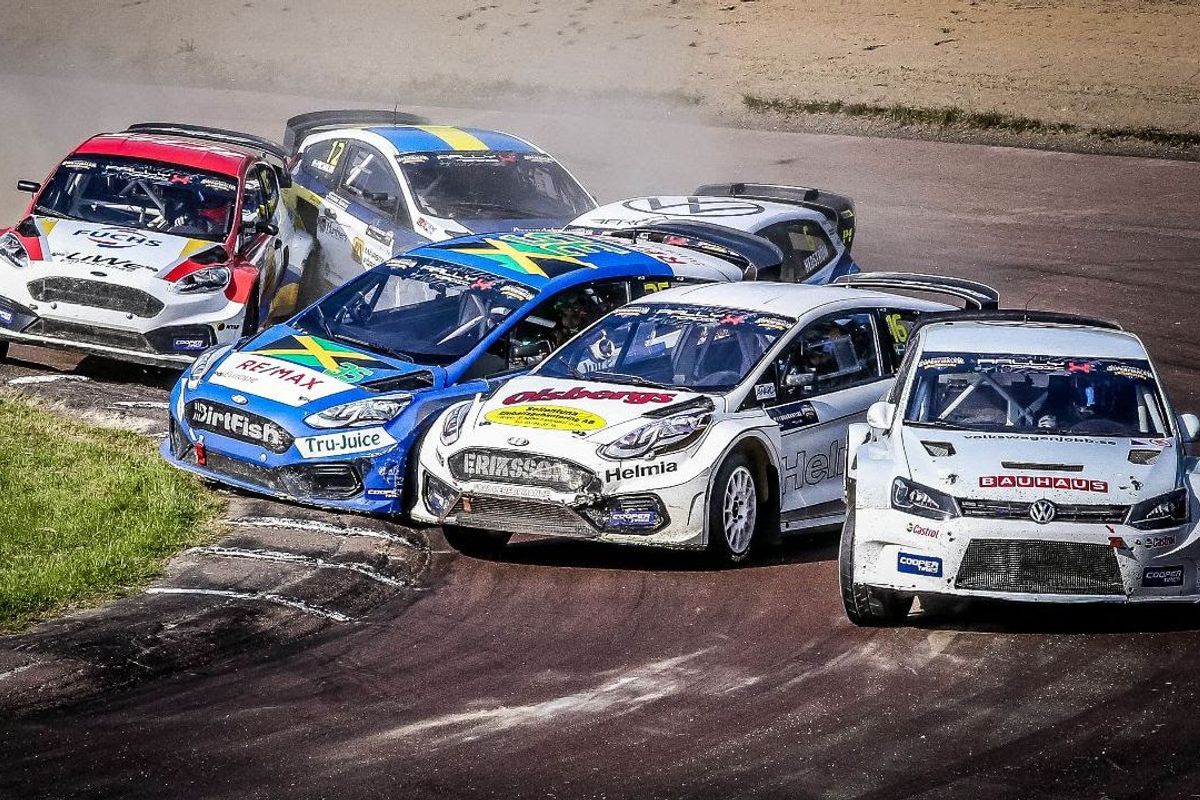 Image: The start of the Supercar final at Arvika was a lively affair

There was a homecoming celebration for Johan Kristoffersson at Arvika, as the Swede maintained his 100 per cent success record at the popular Westombanan track by triumphing in the third round of RallyX Nordic presented by Cooper Tires – but Oliver Eriksson made sure he had to fight for it.

Värmland circuit Arvika is home soil for Kristoffersson, and whilst he had not raced there since 2014, he quickly showed his adversaries who was boss with a clean sweep of all four qualifying sessions, semi-final and final – but that did not tell the full story...

Tired of playing second fiddle to the double FIA World Rallycross Champion, Olsbergs MSE ace Eriksson – runner-up in the RallyX Nordic Supercar class standings for the past two seasons – braved it out around the outside of the first corner in the final before snatching the inside line on the exit of Turn Two.

For the next two laps, the Ford Fiesta held sway at the front of the field, as Eriksson rebuffed Kristoffersson’s every attempt to get past. Time and again, the Volkswagen Polo pulled alongside, but the two-time RX2 Series Champion boldly stuck to his guns and refused to be intimidated.

Something had to give, and when Kristoffersson dived to the joker lap, Eriksson knew he needed to get the hammer down if he was to retain his advantage. Unfortunately, a mistake at the last corner saw him tap the barrier on the inside, and the contact would ultimately leave him nursing a double puncture and fighting a rearguard action.

As Kristoffersson motored serenely on to his second victory from three starts in RallyX Nordic this year, his OMSE rival was going in the opposite direction. Linus Westman snuck past on the last lap to record an excellent second-place finish, with the gutsy Eriksson having to properly get his elbows out to fend off Peter Hedström on the run to the chequered flag. Flashing across the finish line on only two rims, in the circumstances, third position marked an astonishing effort.

Multiple Swedish Rallycross Champion Hedström wound up fourth on his seasonal debut, ahead of Fraser McConnell. After proving to be Kristoffersson’s closest challenger in both Q1 and Q2, the Jamaican seemed set for a stellar result on the weekend that his country celebrated its Independence Day, but a squeeze at the start of the final sent him spearing across the grass and tumbling down the order.

McConnell’s OMSE stablemate Anders Michalak could tell a similar hard luck story. Fast throughout, the Swede looked to be on course for a rostrum result until gearbox issues intervened – but he could still take heart from a tremendously promising performance in only his second event at Supercar level.

Johan Kristoffersson: “I said all along that you need to be extremely sharp if you want to achieve a clean sweep. Oliver [Eriksson] was really on it in the final. I had a little bit too much wheelspin at the start and he pulled a great move up the inside of me and over the jump. After that, we had a fun battle for a couple of laps – it was only a shame it was cut short as I was looking forward to continuing the fight. Still, I’m very happy that we were able to put on such an exciting show for all the fans following via the livestream.”

Henrik Krogstad was the main man in Supercar Lites at Arvika, as the Norwegian delivered #YellowSquad its first victory in the category with a dominant performance. After leaving his rivals eating his dust in the opening three qualifiers, Krogstad was denied a clean copybook in Q4 when Linus Östlund narrowly pipped him to the post – but he would not allow any of his adversaries the same opportunity in the semi-final or final.

His second Supercar Lites win – and first since his competitive comeback this year – vaulted Krogstad to the summit of the championship standings, tied on points with Jesse Kallio, who took the chequered flag second at Westombanan despite having to drive with a bandaged-up wrist following contact in Q4.

The Finn benefitted from a suspension breakage for OMSE team-mate Östlund to inherit the runner-up laurels, although the latter could console himself with the Swedish Championship (SM) crown. He also remains firmly in the hunt for the RallyX Nordic title, just two points adrift of the top of the table.

An impressive Martin Enlund made it a double podium celebration for OMSE in third – the Swedish teenager’s maiden top three result in the class in only his fourth start – ahead of Gustav Johansson, for whom Arvika marked a tremendously positive weekend. Fellow finalist Mats Oskarsson pulled off the track at mid-distance with a punctured tyre.

The most frustrated driver leaving Westombanan, however, was undoubtedly Simon Olofsson. Championship leader going into the weekend, the STS RX ace was in the mix throughout the qualifying stages but a mistake in the semi-final saw him hit the barrier exiting the joker, breaking his right-rear wheel and ruling him out of a spot in the all-important final.

Henrik Krogstad: “This feels so good – it’s the best racing weekend I’ve ever had! Right from the start of Q1, I was properly in the zone and had a lot of fun – there wasn’t a single lap all weekend that I didn’t enjoy. It’s an emotional result. It’s my first win since returning from a year away and #YellowSquad’s first win in Supercar Lites, and everybody involved fully deserves this success for all the hard work that has gone into the project – that hard work is now paying off.”

At Höljes last month, Patrik Hallberg posted the fastest time in five of the seven CrossCar/Crosskart qualifiers and appeared to be a dead-cert for some silverware, only for a spin and a stall to see him leave the track empty-handed. He was not about to let victory slip through his fingers again.

The Swedish teenager was in a league of his own from Q1 to Q3, but gear selection problems in Q4 spoiled what was looking set to be a clean sweep. Undeterred, Hallberg went on to dominate his semi-final and the final, finishing the job he had started at Höljes – and in some style.

Isak Reiersen continued his podium-finishing run by taking the chequered flag second, following a stirring early duel with former championship leader Max Rundberg, whose bid would unfortunately end in the barriers. The JC Raceteknik Juniorteam ace also had to withstand a late-race challenge from Oskar Andersson, who briefly got ahead only to run through the gravel at the last corner and slip to third.

In the new-for-2020 CrossCar Junior class, Alex Gustafsson fought his way to the top step of the rostrum. After winning two of the four qualifiers, the 13-year-old gave himself some work to do in the final. Slow away from the lights, he had to overcome both Raoul Dahlqvist and Rasmus Persson, but once he was in the lead, he simply checked out to vault from fourth to first in the championship table.

The architect of a number of eye-catching overtaking moves, Dahlqvist held on to finish second from Persson, meaning the battle for glory in CrossCar Junior – as in all of the other RallyX Nordic categories – will go down to the wire in the double-header season finale at Nysum in Denmark on 4-6 September.

Patrik Hallberg: “It’s unbelievable – this feels great, especially after Höljes, where we should definitely have come away with a much better result. I got an amazing start in the final and pushed flat-out, which enabled me to build up a bit of a gap and then I could just focus on bringing it home. To be so fast at two completely different types of track is really encouraging going forward.”

Alex Gustafsson: “I dropped back a bit at the start of the final, after which I had a big battle with Raoul (Dahlqvist). I pulled off what I thought was a good move on him into the last corner, but he came straight back at me again! My joker then wasn’t great, so I was a bit surprised to emerge in front after Raoul jokered too. I’ve been driving at Westombanan since I was six-years-old, so I know the track pretty well and it really is such a special feeling to win at ‘home’.”