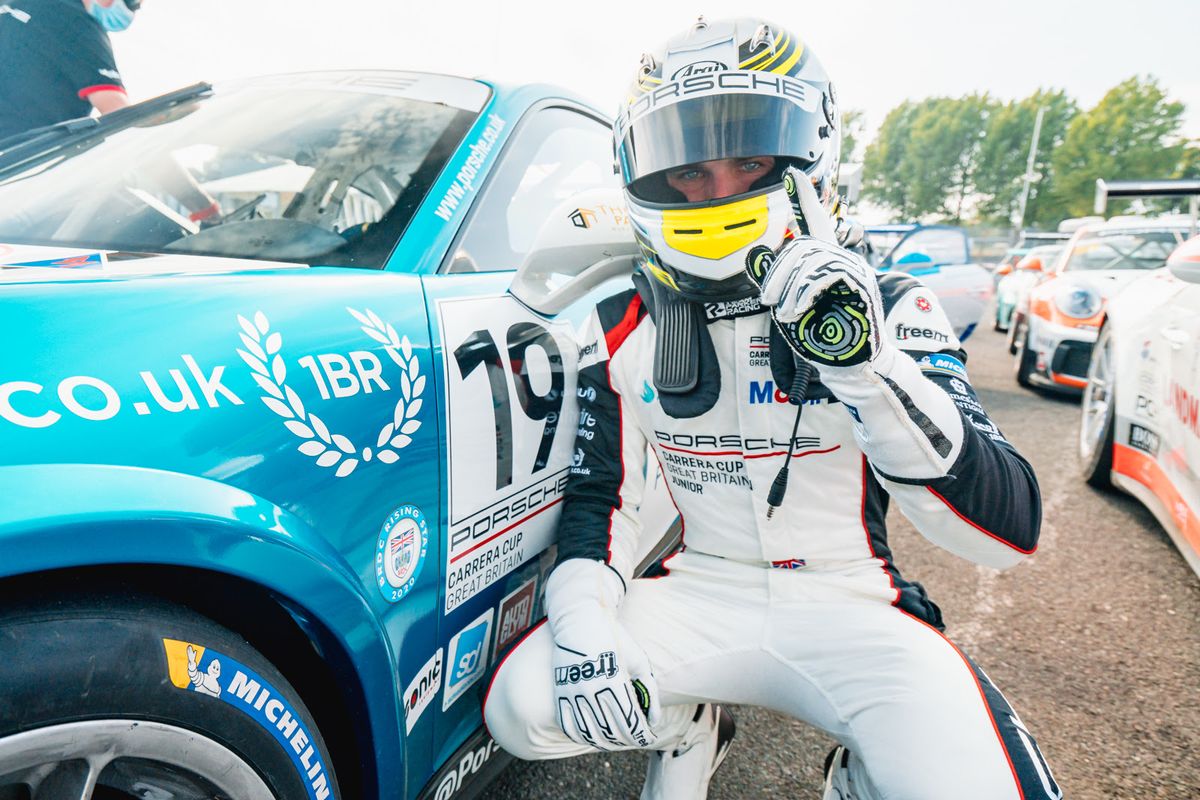 Harry King maintained his stunning start to life in the Porsche Carrera Cup GB with a double win in the second round of the season at Brands Hatch.

Buoyed by an impressive debut in the series a week earlier at Donington Park, the Porsche UK Junior driver went into the weekend seeking to strengthen his lead in the championship standings and was on the pace from the outset in Friday practice, where he would end up fourth on the combined times.

In sweltering conditions for Saturday’s qualifying session, Maidenhead racer Harry then produced an astonishing, record-breaking, lap time of 1:27.069s to secure pole for the second meeting in a row - with his best time being more than three tenths of a second quicker than team-mate Josh Webster.

Showing Harry’s dominance of the session, the same gap covered the following six drivers, whilst his fastest three laps would all have been good enough to take top spot on the grid.

Lining up at the front of the grid, Harry lost out to team-mate Webster on the run to Paddock Hill Bend for the first time and would run behind his fellow Team Parker Racing-run car through the first 14 laps - which featured two safety car interruptions following incidents further down the order.

After the second restart and with the laps counting down, Harry saw his chance to make a bid for the lead into Paddock Hill Bend and a fine move saw him slide down the inside of Webster to snare first spot, and an advantage he would hold through the closing laps for his second win of the campaign.

Drawn in fourth spot on the grid for the second race, Harry made a solid start when the lights went out to move up to third place behind Matthew Graham and Webster before a short safety car period to clear a car from the gravel at Paddock Hill Bend.

On the restart, Harry repeated his move on Webster from race one to move into second spot, and with the safety car about to come back out after another incident further down the order, managed to get inside Graham at the final corner to snare the race lead.

Following four laps behind the safety car, the race action resumed and Harry was in a class of his own, racing away from the chasing pack and setting a best lap half a second quicker than anyone else.

A third win in four starts means Harry now leads Webster by eleven points in the standings ahead of the next round at Oulton Park in two weeks time.

"It's been a perfect weekend with pole for race one and then two victories," he said. "It's all credit to Team Parker Racing for the work they have done on the car, and myself and Josh have a real margin over the others at the moment. I feel great in the car and in the team, and we have been able to hit the ground running. To be straight at the sharp end is great and we have shown clear intentions when it comes to the championship.

"I'm full of confidence but I have to make sure I don't get carried away because there is still a long way to go before we come back to Brands Hatch in November for the final rounds. Things look positive heading to Oulton Park which is quite similar to the GP circuit here and I'm hoping for another strong weekend there."