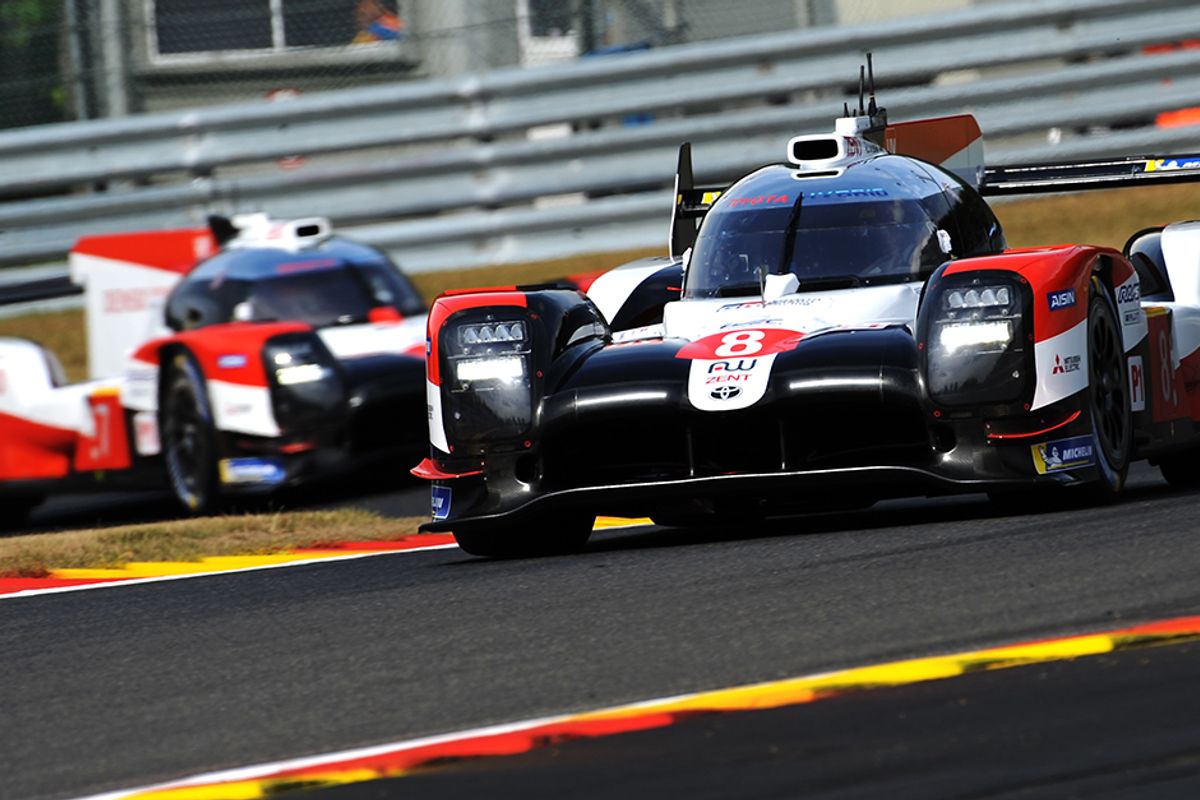 Saturday’s race saw extremely changeable weather conditions including four safety car sessions due to intermittent rainfall and incidents out on track.   After a week of extremely hot temperatures, the rain returned to Spa-Francorchamps where tyre choice played a major factor in the action-packed race.

Rebellion Racing started on pole but the Swiss team suffered an early setback when Norman Nato lost valuable time due to high tyre pressure issues in the opening stint.  The squad was unable to make up the time lost to the Toyotas in the changeable weather conditions and eventually saw the trio of Bruno Senna, Gustavo Menezes and Norman Nato finish third.  Menezes did, however, post the fastest lap of the day with a time of 1:59.432 on the 92nd lap.

The win for the Toyota Gazoo Racing marks the third win of the season for the No. 7 car (and fourth for the squad) and sees the No. 7 entry extend its lead at the top of the overall leaderboard to 12 points.

The sister car driven by Sebastien Buemi, Kazuki Nakajima and Brendon Hartley made it a Toyota 1-2, the team crossing the line 34.179 seconds behind the race winners.  Early in the race, the No. 8 was in the lead but a decision to pit early to change to slicks proved detrimental as the rain returned shortly later and relegated the team to second place, where they remained for the rest of the race.

It proved a thrilling battle in the LMP2 category as Giedo Van Der Garde put in a superb opening stint in the No. 29 Racing Team Nederland entry, which saw the Dutch team take an early lead.  It was not to last, however, as United Autosports fought back in the changeable weather conditions and faster pitstops to take the lead going into the race’s final two hours.

Second place went to the No. 42 Cool Racing ORECA 07 Gibson fronted by Nicolas Lapierre, Antonin Borga and Alexandre Coigny.  The Swiss team got off to a difficult start pitting early to mark a driver change but the trio made a mighty comeback eventually crossing the line ahead of Racing Team Nederland who finished third.

The No. 36 Signatech Alpine Elf entry looked on course for a top three position but there was drama in the race’s closing hour when Thomas Laurent crashed heavily at Blanchimont after making contact with another car. Fortunately, 22-year-old Laurent walked away from the car but was taken to the medical centre for further checks.  The incident brought a 36-race points-scoring streak to an end for the French team.

It was a relatively trouble-free race for the No. 38 JOTA Sport Entry and No. 33 High Class Racing entries who finished fourth and fifth respectively with the help of Goodyear tyres. Antonio Felix Da Costa took advantage of Mark Pattersons’s small spin in the race’s closing stages to move ahead of   the Danish team in the race’s closing stages. Italian team Cetilar Racing ended the race sixth overall.

The No. 37 Jackie Chan DC Racing entry eventually finished seventh, the car spending a lengthy stint in the pits due to rear brake failure.  Meanwhile, Eurasia Motorsport ended the race eighth in class – the team suffering from gearbox issues during the race.

Next up in the FIA WEC calendar is the legendary 24 Hours of Le Mans which takes place next month behind closed doors (19-20 September).