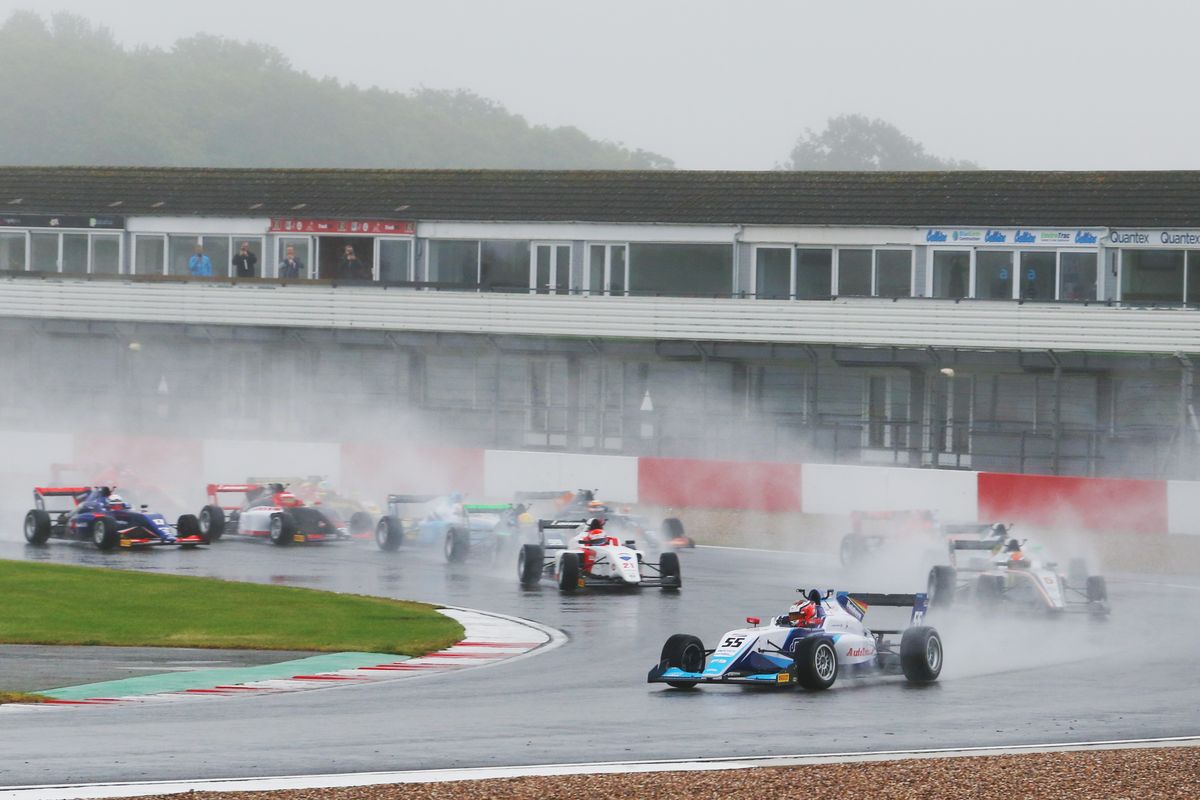 Wet weather played a part in two gripping British F3 contests at the East Midlands circuit, with clean wheel to wheel racing throughout the field, especially in the final contest of the weekend, which saw a thrilling battle for the podium places.

Race two
Belgian driver De Pauw secured his first ever British F3 victory from pole position in the reversed grid race two this morning. He led from lights to flag, and in the early stages was operating in a race of his own, with a margin of over nine seconds to his nearest rival at mid-race distance, before the charging Frederick whittled the gap down in the final few laps.

Race three
The final race of the weekend was a thriller, and Maini started from pole position, with the grid based on each driver's second fastest times from qualifying. The Indian driver held the lead for the first three laps, but Frederick forced his way past around the outside of Goddards on lap four, and then lapped over a second quicker than the rest to win by over 11 seconds, the second biggest winning margin in BRDC British F3.

The action behind him though was enthralling, as five drivers squabbled for the podium places. The second half of the race saw Maini and Chris Dittmann Racing's Josh Skelton go wheel to wheel on several occasions, with Skelton eventually taking second place and a maiden podium by just a tenth of a second as they crossed the line side-by-side, with Maini settling for third. Skelton's teammate Nico Varrone charged from 14th on the grid to join the fight, taking fourth ahead of Kiern Jewiss (Douglas) and Louis Foster (Double R), who were both well in the scrap for the podium places.

Race two winner De Pauw said: "After yesterday we are really happy. I had a solid start, went away from the line very well. In the first few laps I saw that I was very fast compared to the guys behind, so I didn't really push hard. I was just controlling the race, and then I saw Kaylen coming back at the end and the gap was dropping off quite massively, and I just didn't really manage to get out of my comfort zone. I stayed driving really calm and not taking any risks and brought it back home. So a big thanks to the team, and a first win in British F3 for me."

Race three winner Frederick said: "I honestly didn't really expect this, I was just going to settle in for a podium position, but I got a really good start, almost got the lead at the start, but he [Maini] kept hold of it for a couple of laps. He told me he had a couple of issues so he was struggling in front of me and we just had a bit too much pace for him I guess. Once I got ahead it was just clean air for myself, I focused on putting in a quick lap and it seemed like they were struggling behind. I'm really happy with the performance of the team today, we had a great recovery earlier and now a win, it's just awesome, the best way to end a weekend.

"Honestly after yesterday's race I was really a bit gutted, and the way we have bounced back today is absolutely awesome, so I'm really chuffed. I don't know where I stand in the championship but I think we've salvaged quite a few points this weekend considering we had a really bad race yesterday."

Image:  De Pauw leads the field at the start of race two