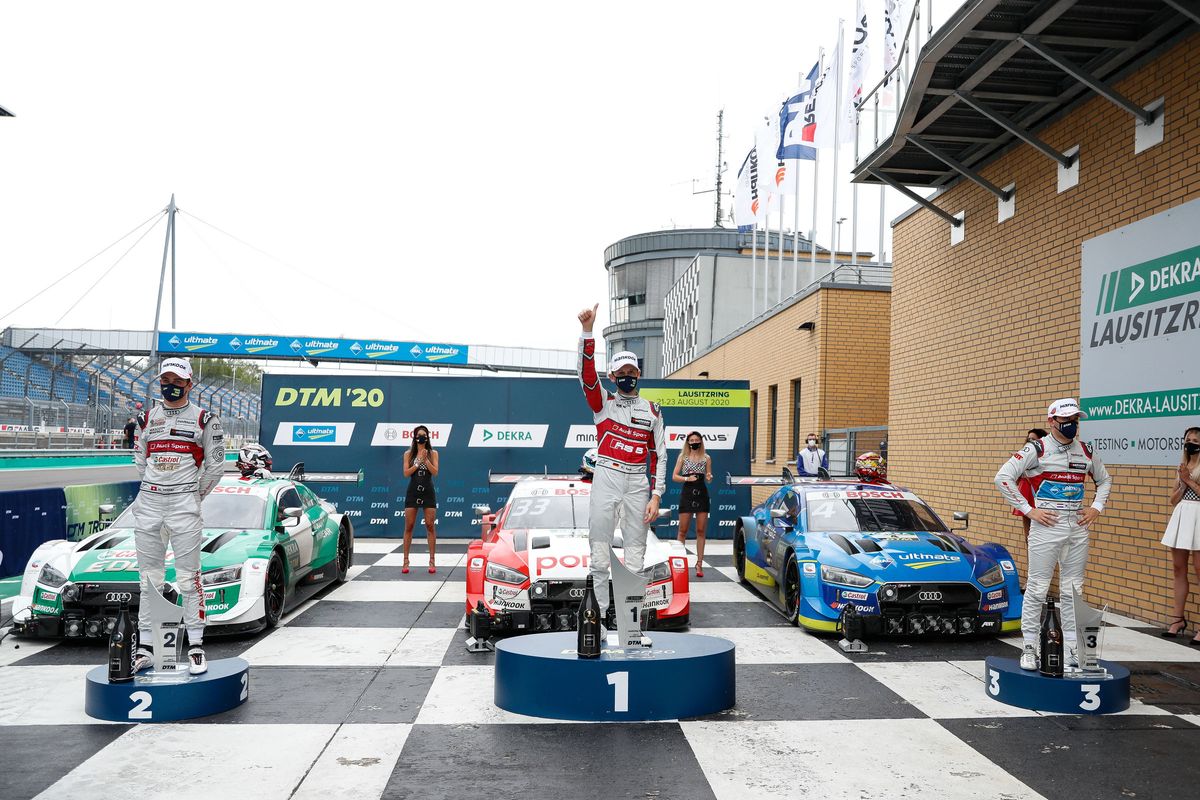 A change of weather conditions at the Lausitzring: After last weekend’s hot races and extremely high temperatures on Friday, it started to rain on Saturday shortly before qualifying. Championship leader Nico Müller clinched his first pole position of the season on the wet track ahead of René Rast, Robin Frijns and Mike Rockenfeller (Audi Sport Team Phoenix).

Müller held a commanding lead in the early stages of the race on wet weather tires but lost his lead after pitting for slicks too late. Having dropped back to fifth, the leader of the standings was able to fight his way back to second.

René Rast’s race went the other way around. “My start was very bad, and I went through the gravel at one stage,” said the defending champion. “It was crucial to pit at the right time and then take a risk. I was able to overtake Philipp (Eng), Marco (Wittmann) and finally Robin (Frijns) with good moves. I used push-to-pass and DRS at the right moments. In the end I was able to defend my lead over Nico.”

Müller set the best time in both free practice sessions on Friday and also recorded the fastest race lap. “We had the fastest car here so far in all conditions but did not manage to win,” said the Swiss. “Nobody is really to blame for that. We simply came to the pits one or two laps too late – also because I slightly misjudged the situation in the car. On the positive side: I was able to control the race in the rain at the beginning and was fast on slicks as well. And we scored a lot of points again.”

Robin Frijns completed the podium in third. The Dutchman was leading the race after changing to slicks and fought a tough duel with eventual winner René Rast. “I had a good rhythm after the pit stop. But I did not expect that the tire deg would kick in that much as it did in the last six laps in these damp conditions,” said Frijns.

“This is another fantastic result for Audi even if there was some room for improvement regarding the race strategy,” said Head of Audi Motorsport Dieter Gass after the twelfth consecutive victory for Audi in the DTM. “It was a podium sweep for Audi. We’ve seen great motorsport with an exciting race and good fights.”

The return of dry weather conditions is predicted for Sunday’s last of the four Lausitzring races (live on SAT.1 from 1 PM CEST).