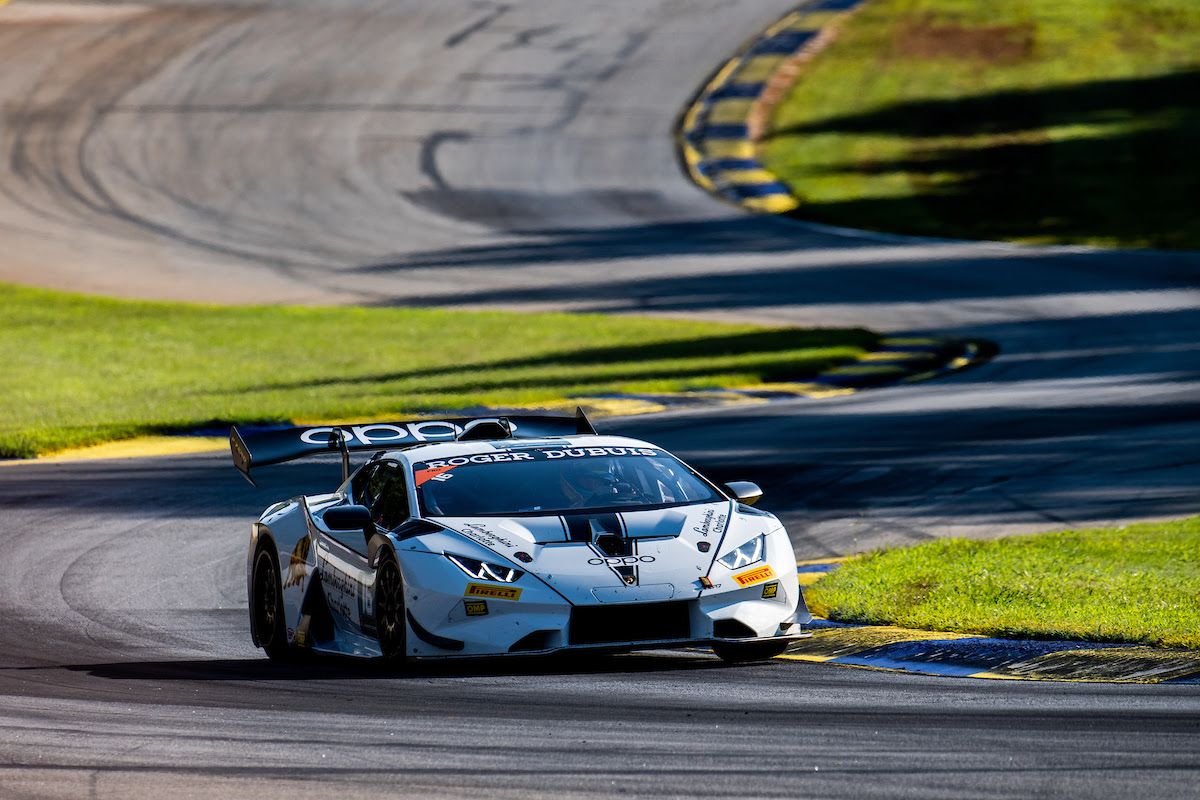 Change Racing came to race in the second half of the Lamborghini Super Trofeo North America doubleheader at Michelin Raceway Road Atlanta, fielding winners in all four classes Sunday. Among them was overall and Pro class victor Madison Snow, who completed a pivotal sweep of the two weekend races to vault into the championship lead.

Joining Snow as class champions Sunday for Change Racing was brother McKay Snow and Corey Lewis in ProAm, Victor Gomez IV in Am and Randy Sellari in LB Cup.

Driving the No. 16 Change Racing, Lamborghini Charlotte Lamborghini Huracán Super Trofeo EVO, Madison Snow passed chief rival Steven Aghkahani in the pole-sitting No. 6 US RaceTronics, Lamborghini Beverly Hills Huracán for the lead with 18 minutes remaining in Sunday’s 50-minute race. The No. 16 built a small cushion before the No. 6 spun entering Turn 1 on the final lap. Aghakhani eventually came to a stop on track for an 11th-place overall finish, fifth in class.

“I knew starting on the outside (of Row 1) here was going to be a challenge,” Madison Snow said. “I ended up making the pass late in the race after the pit stops all cycled through, and then I was able to keep the lead.”

Brandon Gdovic (No. 46 Precision Performance Motorsports, Lamborghini Palm Beach Huracan) finished second overall and in the Pro class for the second straight day. By doubling up in victories, Madison Snow turned a five-point deficit coming into the weekend into an 11-point lead over Aghakhani and teammate Jacob Eidson in the Pro standings after the third of five doubleheader rounds this season. Gdovic is 12 points out of the lead with four races remaining.

“The points are huge,” Madison Snow added. “I came in here behind in points and came out with a little bit of a gap in the lead, so I couldn’t have had a better weekend.”

Turnabout was fair play in ProAm this weekend. A day after an on-track incident shattered hopes for a class win in the No. 63 Change Racing, Lamborghini Charlotte Lamborghini Huracán, Lewis and McKay Snow benefited Sunday when Leo Lamelas suffered a tire puncture while leading with less than three minutes left in the race. Lewis zoomed past as the No. 63 collected its fourth ProAm win of 2020 and finished third overall. Ashton Harrison and Andrea Amici took second in ProAm in the No. 25 Prestige Performance with WTR, Lamborghini Paramus Huracán.

Lewis and McKay Snow retained the 11-point championship lead they held over Lamelas going into the weekend.

“I messed up yesterday and cost us a little bit in points, so I knew I had to come back out here and show them that we’re not going away anytime soon,” said McKay Snow, who started second but passed Lamelas for the ProAm lead on the first lap and held it throughout his stint before handing the No. 63 over to Lewis on the mandatory pit stop.

“I just kept a little bit of a lead and had Leo right behind me most of the time. We got Corey in the car and he got stuck in a little bit of lapped traffic on track (to fall behind Lamelas), but he was just so fast that he was running Leo down.”

Lewis trimmed a seven-second deficit to one second when Lamelas slowed with the delaminating tire.
“It was a little bit of redemption from yesterday, for sure.” Lewis said. “I’m proud of McKay. He got right back in the car (following Saturday’s crash) and turned fast laps right off the bat. He did the first stint perfect and handed me a car that was in contention to go fight for P1 in class.”

A day after enduring a flat tire of his own, Victor Gomez IV enjoyed a less eventful winning drive in the Am class. The driver of the No. 29 Change Racing, Lamborghini Charlotte Lamborghini Huracán continues to gauge his progress against drivers in other classes since he’s raced mainly without class competition this season.

“I am feeling more comfortable and learning each time in the car,” Gomez said. “Change Racing gave me a very good car. I was able to battle with some of the Pros and had a good weekend.”

“I had to stay as close to him as I possibly could,” Sellari said. “Then towards the end, I think it was the (No.) 6 car that had a flat and it helped me close the gap. From there, I had to make a choice and I went for it in (turn) 6, I think, and passed him. Once I got around him, I wasn’t going to let anybody catch me.”
Sellari leads the LB Cup standings by 19 points over Matt Dicken (No. 36 Change Racing, Lamborghini Charlotte Lamborghini Huracán) and by 21 over Hennessy.