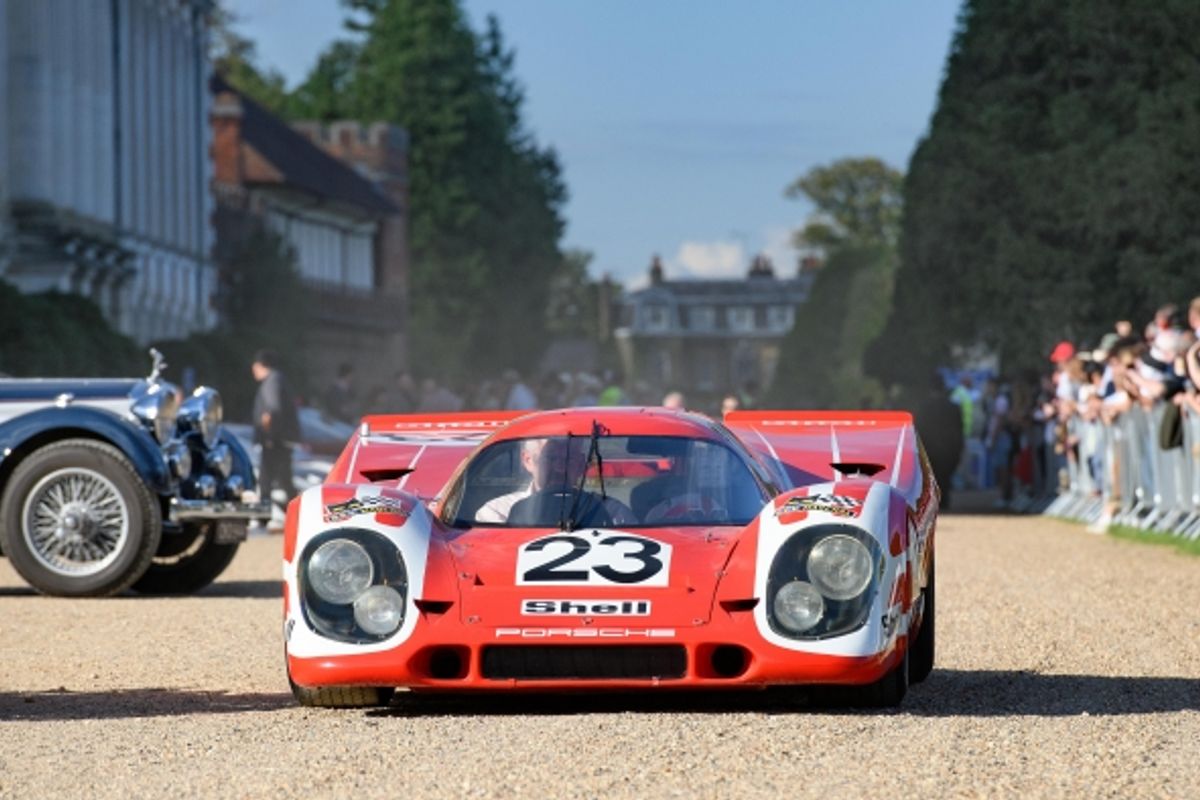 Concours of Elegance has wrapped up its most memorable event to-date, featuring the greatest ever line-up of collector cars gathered in the UK
A Porsche 917 KH, driven by Richard Attwood and Hans Herrmann to Porsche’s first ever victory at Le Mans in 1970 was crowned as the event’s ‘Best in Show’

Awards were also given by decade, with the first ever production Land Rover winning the ‘40s and an Alfa Romeo 6C 1750, driven to victory in the Mille Miglia in the ‘20s
The Club Trophy presented by the Royal Automobile Club and supported by Classic and Sports Car was awarded to a Messerschmitt KR200

A number of cars made their UK debut at the event, including the Ineos Grenadier, Brabham BT62R and the one-off commission Aston Martin Victor
The Gooding & Company ‘Passion of a Lifetime’ auction broke world records, including the highest price ever for a Bugatti and a Lamborghini Miura
The Concours of Elegance will return on 3-5 September 2021

The Concours of Elegance, presented by A. Lange & Söhne, is celebrating its most memorable running yet, as the first international concours d’elegance event in over six months welcomed the most incredible line-up of collector cars ever gathered in the UK. The ‘Best in Show’ award, voted by the owners of these cars, went to the Porsche 917 KH driven to victory in the Le Mans 24 Hours race in 1970 – Porsche’s first win at the event.

The quality of the cars this year was more spectacular than ever, thanks to the commitment of the event’s Steering Committee and car curation team. Greeting visitors as they emerged from Henry VIII’s former home and into the Fountain Gardens was a special Ford vs. Ferrari display, paying homage to some of Le Mans 24 Hours’ most famous racers. Among them was a Ford GT40, a Ferrari 250 LM, 365 P2 and a stunning Ferrari 250 GTO. And that’s even before reaching the main line-up of concours vehicles.

The Best in Show-winning 1969 Porsche 917 KH, was a crowd favourite throughout the event, with its imposing design and incredible backstory. In 1970, Hans Herrmann and Richard Attwood drove this very same 917 KH (short-tail) with start number 23 and in the world-famous red-white Salzburg design to the first of (so far) 19 overall wins for Porsche at the circuit. The 917 was Porsche’s first time in the league of immensely powerful, large-capacity racing cars. Its 580bhp 4.5-litre 12-cylinder engine set new standards, and is still legendary today. In a fortuitous coincidence, the winner of the event’s all-new ‘Junior Concours, sponsored by The Little Car Company’ Best in Show prize went to a petrol-powered three-quarter scale replica of this very car, named victorious against 10 other scale children’s classics.

Awards were also given out for different classes and eras.  Once more judged by the owners of the Main Concours cars, the winners included the very first production Land Rover – making its debut following an enormously detailed restoration – and an Alfa Romeo 6C 1750, famed for its Mille Miglia win in the 1920s.

Outside of the main Concours of Elegance cars, nearly 1000 other models parked at Hampton Court Palace for the weekend, including a collection of Future Classics, from a Porsche 911 Reimagined by Singer to a Bentley Continental GT No.1 Edition. Despite the quality on display, there could really only be one winner: the Aston Martin Victor. This one-off commission is the most powerful road-legal naturally aspirated Aston Martin has ever produced, boasting 836bhp. With styling inspired by the 1980s Vantage, the mechanicals are thoroughly modern, comprised of race-ready powertrain and chassis components and lightweight carbon fibre.

Also on display were some of the finest examples from the UK’s most prestigious car clubs, as part of the Club Trophy presented by the Royal Automobile Club and supported by Classic & Sports Car. A panel of expert judges, including HRH Prince Michael of Kent and Classic and Sports Car editor, Alastair Clements, deemed a Messerschmitt KR200 to be the best on display. Powered by a two stroke 191cc Fichtel & Sachs engine that produces a modest 9bhp, the Messerschmitt wasn't the most powerful car in the Concours, but its charming design and excellent condition won over the judges. It will now take its place among the main concours cars for the Concours of Elegance 2021, which is already scheduled to take place from 3-5 September, as part of a special tenth running of the event.

Our Car Club displays, sponsored by Classic & Sports Car, formed a line-up of individual marques around the perimeter of the Garden, including the Jenson Owners’ Club, Alvis Owners’ Club, XK Club, E-type Club and more. Each day the Classic & Sports Car editorial team picked their favourite, awarding a Lotus Eclat – owned by its current custodian for more than 30 years – and a Jaguar XK120 Roadster, finished in a striking bronze. This very same XK120 also caught the eye of the Jaguar Trophy judges, winning the top prize from a line-up of gathered E-types, XKs and more.

On Sunday 6th September, the Concours of Elegance welcomed in a line-up of distinguished Bentley models throughout the ages, each competing for the event’s Bentley Trophy. A judging panel, led by Giles Crickmay of Frank Dale & Stepsons, picked out a Bentley 4.25-Litre Streamlined Drophead Coupé, first owned by Bentley Boy and one-time Bentley Chairman Woolf Barnato. Presented in near-perfect condition, the body is said to be finished in the colour of Barnato’s wife’s favourite dress.

Newly introduced for this year’s event was the Bridge of Weir Leather Design Award, picked by a committee of automotive designers gathered by the Scottish company. The stunning 1938 Bugatti Type 57 Atalante Coupe by Gangloff, with its unique body and black over purple paintwork was recognised by the judges for its outstanding design and innovation.

The main vehicle features were complemented by line-ups from the world’s greatest classic car specialists and car manufacturers, many of whom were displaying cars at the event for the first time. Aston Martin showcased its latest range, as well as the debut of the one-off Victor, while Ineos paraded its all-new Grenadier with a collection of rugged off-road legends. Jaguar Classic presented its continuation D-type in a bespoke two-tone colour scheme while, at the other end of the spectrum, Lotus was display its all-electric EVIJA hypercar and Brabham showcased its racing car for the road, the BT62R.

Outside of the automotive displays, Concours of Elegance was an occasion of pure luxury, with champagne provided by Charles Heidsieck, picnics by Fortnum & Mason, live stage interviews with Chubb Insurance, hosted by Jodie Kidd and a collection of art, jewellery and fashion displays. Presenting Partner, A. Lange & Söhne, showcased some of its latest intricate timepieces, including the Lange 1 Time Zone.