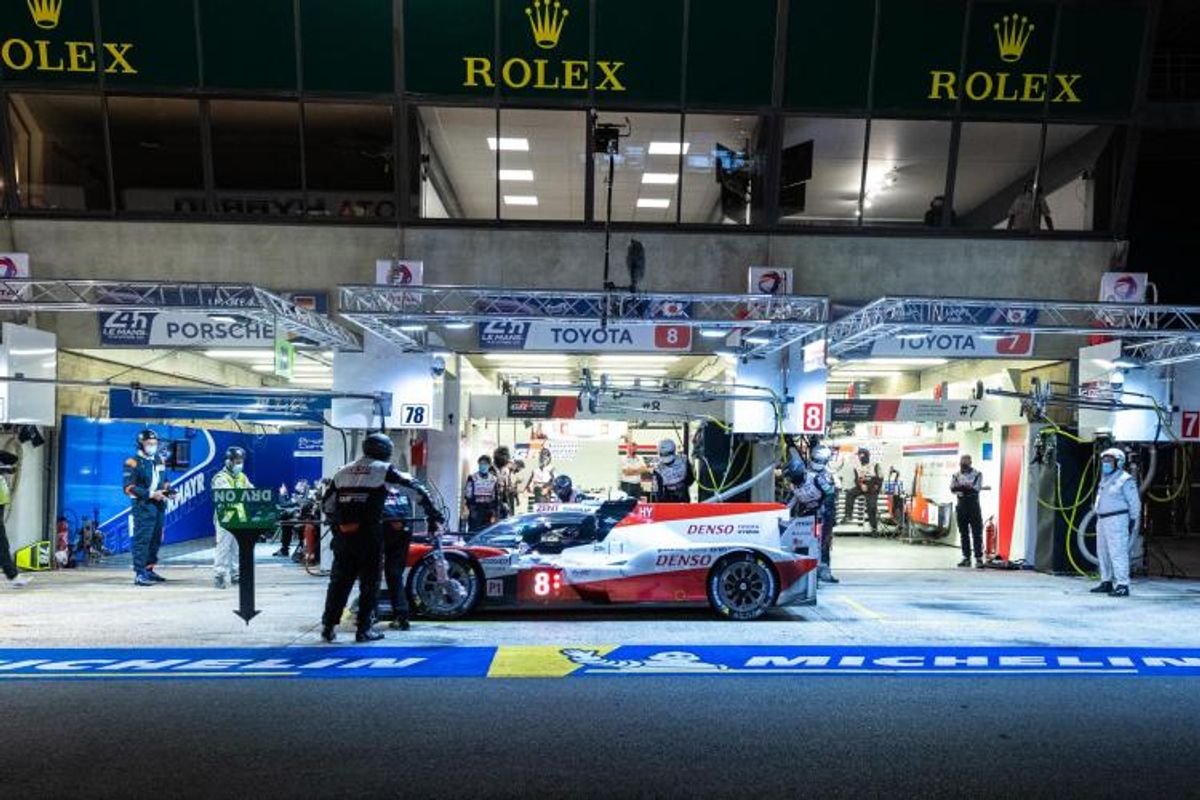 At 02:30, the halfway point in this 24-hour marathon, the running was good and Toyota seemed to have everything under control out in front. But there was a glitch on the horizon for the Japanese manufacturer.

At 02:40, in the dead of the night, the Toyota Gazoo Racing #7 Toyota TS050 Hybrid of Mike Conway/Kamui Kobayashi/José-Maria López pitted. The mechanics pounced on the car. They proceeded to change the turbo, a lengthy operation which delayed the #7, a decidedly unlucky number in the Japanese camp. It regained the track in fourth place, six laps behind the #8, the race leader.

A change of turbo is fairly serious. But does it mean the #7 has no chance of winning? Time will tell. Cast your mind back to 2014 when the Audi R18 e-tron quattro of André Lotterer/Marcel Fässler/Benoît Tréluyer underwent the same operation. They clawed back to victory. It may be a one-off incident. One imagines that the engineers are poring over the data, to anticipate another glitch and prevent any loss of power on either of the Toyota Gazoo Racing cars.

In LMP2, the two United Autosports Oreca 07-Gibsons (# 22 and #32) were still in the lead. United in their effort, there is evidence of sibling rivalry on track. We were treated to some “brotherly” intimidation with Paul di Resta in the #22 putting pressure on Will Owen aboard the #32. Shortly after 04:00, Alex Brundle (#32 Oreca 07-Gibson) and Filipe Albuquerque (#22 Oreca 07-Gibson) pitted at the same time, something teams usually avoid so as not to hamper operations. But a race is a race. However, the #32 was pushed into the garage for suspected oil leak and the bonnet was replaced at the same time.

Aston Martin is looking strong at the 2020 24 Hours of Le Mans. In LMGTE Pro, the Aston Martin Racing #97 Aston Martin Vantage AMR of Maxime Martin/Alex Lynn/Harry Tincknell was in the lead. The British car has held the lead several times since the race started at 14:30 on Saturday, jostling for position with the AF Corse #51 Ferrari 488 GTE EVO of Alessandro Pier Guidi/James Calado/Daniel Serra. There is little to choose between them. Often less than 10 seconds! The Porsche 911 RSR-19s are not on form. Their drivers have remarked on a lack of top speed compared to their competitors. The #91 lies sixth and the #92 seventh in class.

In LMGTE Am it’s a different story in the Aston Martin camp. They topped the timesheets at 06:20. The TF Sport #90 Aston Martin Vantage AMR of Salih Yoluc/Charles Eastwood/Jonathan Adam was in the lead with the #98 factory car of Paul Dalla Lana/Ross Gunn/Augusto Farfus hot on its heels. Until 06:23 when the #98 was pushed into the garage. Within a few seconds it slipped down to sixth place.

The Dempsey-Proton Racing #77 Porsche 911 RSR of Christian Ried/Riccardo Pera/Matt Campbell is having a good run, making up for the disappointment in the Pro class.