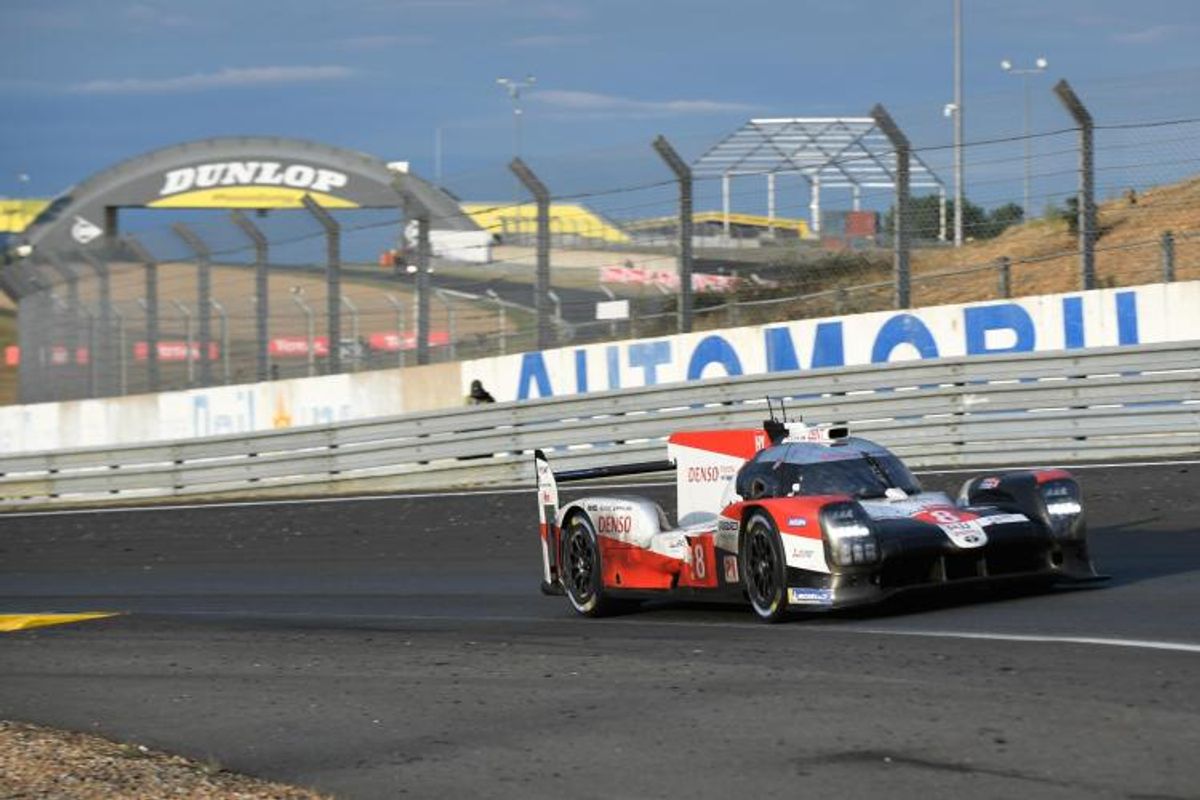 After 20 hours of racing, Toyota presses on with a single TS050 Hybrid, the #8 of Sébastien Buemi/Kazuki Nakajima/Brendon Hartley. Rebellion is in pursuit.

With four hours left to race, Toyota continues to lead the 88th 24 Hours of Le Mans. The Toyota Gazoo Racing #8 Toyota TS050 Hybrid of Sébastien Buemi/Kazuki Nakajima/Brendon Hartley is dominating the field following a turbo issue on the sister car of Mike Conway/Kamui Kobayashi/José-María López in the depth of night.

The first challengers are the Rebellion Racing entries.  The #3 and #1 Rebellion R13-Gibsons of Romain Dumas/Nathanaël Berthon/Louis Delétraz and Bruno Senna/Norman Nato/Gustavo Menezes respectively trail by five laps. The Swiss outfit did, however, suffer a minor warning just after 09:00 when the mechanics had to change the hood fastener on the #1 Rebellion R13-Gibson which was threatening to give out at any moment. This incident closed the gap between the team’s two cars – it now stands at 15 seconds.

United Autosports is bossing the LMP2 class but, like for Toyota, it is well aware that anything can happen. The Anglo-American team has already lost one car in the fight for class victory. The pit crew had to replace an oil line on the #32 Oreca 07-Gibson sending it hurtling down the standings. It is now 18th overall and 14th in class. This car was regularly tussling for the top spot in LMP2 until that technical issue.

JOTA has taken advantage of the #32 car’s misfortune. The #38 Oreca 07-Gibson of Anthony Davidson/Antonio Felix Da Costa/Roberto González lies in second place now that the sun has come up. The G-Drive Racing #26 Aurus 01-Gibson of Roman Rusinov/Jean-Eric Vergne/Mikkel Jensen is hot on its heels. Two-time Formula E champion Vergne was leading the charge during the morning stints. The Frenchman is putting in several very fast laps, peaking at 3:28.856. He is visibly not prepared to settle for 3rd and is pulling out all the stops so that the titanic battle at 08:30 between his teammate Mikkel Jensen and Julien Canal in the Panis Racing #31 Oreca 07-Gibson was not fought in vain.

The game of cat and mouse continues in LMGTE Pro with Aston Martin and Ferrari swapping roles at regular intervals. Porsche has been unable to keep pace this year. The Porsche 911 RSR-19s have been lacklustre from the off, handicapped by a peak speed that is considerably inferior to that of the Italian and British machines. The fastest laps of the two Porsches are over 3:52 compared to the best mark in class recorded by the #97 Aston Martin Vantage AMR of 3:50.321.

In LMGTE Am, TF Sport is pressing on at the head of  the field with the Aston Martin Vantage AMR of Salih Yoluc/Charles Eastwood/Jonathan Adam. The chasing pack was led for a while by Porsche but it’s the AF Corse #83 Ferrari 488 GTE Evo of François Perrodo/Emmanuel Collard/Nicklas Nielsen that has taken up the role. The Dempsey Proton Racing #77 Porsche 911 RSR of Christian Ried/Riccardo Pera/Matt Campbell is tucked in behind. As the four hours to go mark was reached, Pera at the wheel of the #77 was preparing to challenge Perrodo in the #83 with a mere handful of seconds separating the two.