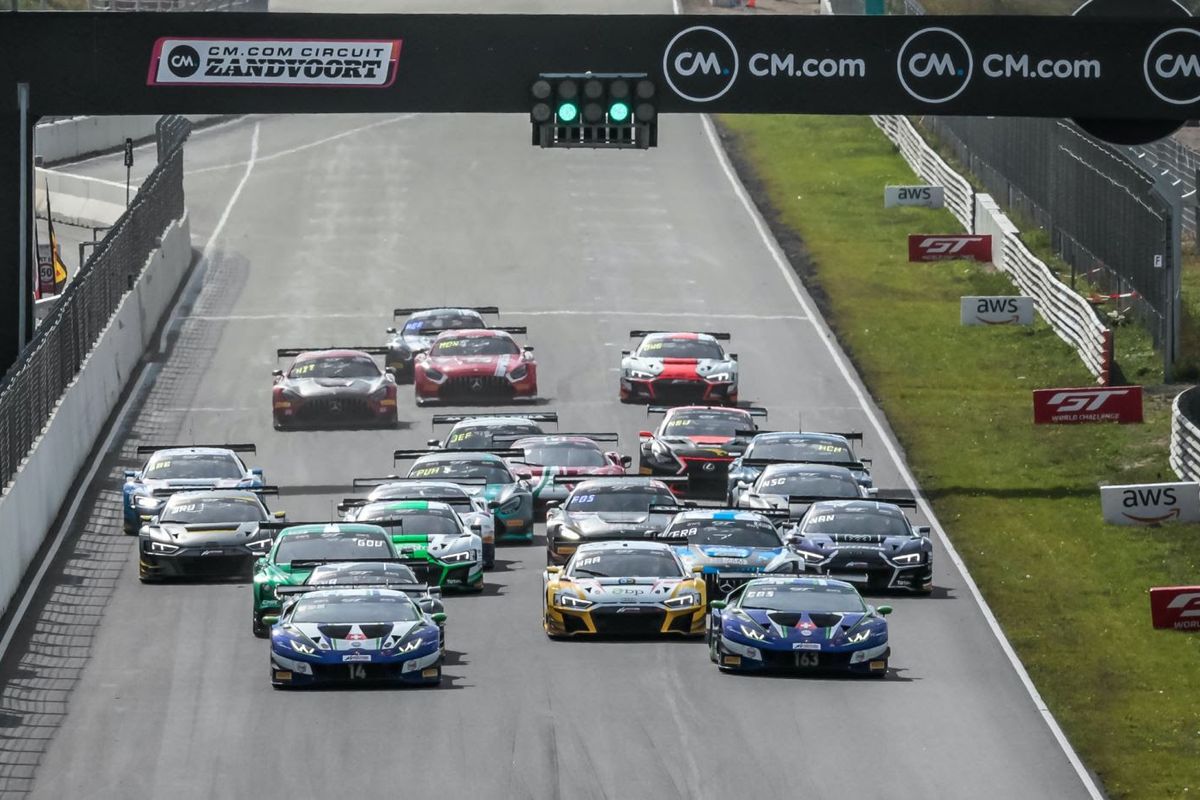 The Swiss outfit had locked out the front row in qualifying, but their path to victory was by no means simple. The pair were split into turn one as Kelvin van der Linde (#31 Belgian Audi Club Team WRT) muscled past Costa to slot in behind poleman Norbert Siedler, while Felipe Fraga (#88 AKKA ASP Mercedes-AMG) and Jules Gounon (#107 CMR Bentley) completed the top five.

The leading cars ran in close proximity throughout the early stages before a crucial sequence of events unfolded shortly before the 20-minute mark. First, Van der Linde launched an ambitious attack on Siedler and slid into the gravel after leaving his braking too late. The Audi was quickly back on the circuit but dropped behind the #163 Lamborghini of Costa, who got alongside teammate Siedler and completed a pass.

Further back Dries Vanthoor had stormed through to third place, the #32 Belgian Audi Club Team WRT machine coming alive after a slow start to the race and relegating the recovering Van der Linde to fourth. His progress would be crucial as the contest developed.

Van der Linde stopped early in the #31 Audi, handing over to Ryuichiro Tomita, while Siedler gave the #14 Emil Frey machine to Mikaël Grenier. Costa ran two laps longer in the #163 car before Altoè took the wheel and, after another two laps, Vanthoor became the final front-runner to stop.

The Belgian had made the most of the extra time on-track and, thanks to a quick turnaround from the WRT crew, Charles Weerts was able to exit the pits just ahead of Altoè. There was little to separate the two teenagers over the following 20 minutes, with Weerts holding off the Lamborghini driver despite heavy pressure.

But there was another twist in the tale as the #32 WRT Audi was placed under investigation for a pit stop infringement. Shortly after, the all-Belgian crew was handed a drive-through that would be converted into a 30-second post-race penalty. Altoè was therefore able to take a comfortable win ahead of teammate Grenier, giving the Emil Frey squad a maiden Sprint Cup win and its first one-two finish in GT World Challenge Europe Powered by AWS competition.

Sixth spot went to the Silver Cup-winning Tech1 Racing Lexus. Thomas Neubauer and Aurélien Panis have shown strong pace all season and finally took a result to match, holding off the #2 Toksport WRT Mercedes-AMG to capture class honours. The Madpanda Motorsport Mercedes-AMG and #107 CMR Bentley were next, while the #32 WRT Audi was ultimately classified 10th.

Pro-Am honours went the way of Sky Tempesta Racing's #93 Ferrari. Chris Froggatt and Eddie Cheever III scored their fourth win of the season and the team's sixth from seven races by holding off the #52 AF Corse Ferrari. The #20 SPS Automotive Mercedes-AMG was third having led the opening stint, with Nick Foster running as high as fifth overall.

Today's results have set up a thrilling title showdown at Circuit de Barcelona-Catalunya, which will stage a trio of races next month (9-11 October). Weerts and Vanthoor lead the way, but their advantage over teammates Tomita and Van der Linde is just half a point heading into the decider. The HRT Mercedes-AMG crew of Maro Engel and Luca Stolz are just four points off top spot, despite skipping the Zandvoort weekend, while AKKA ASP, Sainteloc Racing and Emil Frey Racing also retain a shot at the title. A dramatic showdown is in prospect as the quick-fire Sprint Cup campaign reaches its climax.

Albert Costa, #163 Emil Frey Racing Lamborghini: "It was crazy, like a karting race. We were fighting each other, trying to pass all the time. Kelvin tried to pass Norbert and then Norbert let me pass because he had some issue. Then I said to myself, 'push Albert, it’s your race!' And we did it, but Vanthoor was very quick. Finally the luck was on our side, and I am really, really happy."

Giacomo Altoè: #163 Emil Frey Racing Lamborghini: "I got the message from the team with two laps to go and then I just had to manage and stay behind. It has been a crazy race, but finally we are back after the bad luck from qualifying and race one. I’m so happy for me and Albert, we did a great job and also for the team, so thank you."

Thomas Neubauer, #15 Tech1 Racing Lexus: "We weren’t expecting this after what happened earlier during qualifying, but in the end we are very happy with the result. We really deserve it after the beginning of the season, being quite unlucky, and a massive drive by my teammate."

Aurélien Paris, #15 Tech1 Racing Lexus: "The car was good, the pace was there and Thomas did a great start. I’m very happy for the whole team because the luck wasn’t there at the beginning of the season and finally we are on the podium. We won the Silver Cup, so I'm really happy."

Eddie Cheever III, #93 Sky Tempesta Racing Ferrari: "It was a crazy start but I had a little hole at the inside and I lost a position. Then I saw a yellow Audi spinning right in front of me, that was not nice, but I’m very happy with the first stint and Chris did an amazing second stint. He took the lead, so a very good job and very good for the team."

Chris Froggatt, #93 Sky Tempesta Racing Ferrari: "A double win, that’s the dream weekend, you can’t wish for more. Consistent driving, super happy. Great race for both of us and we have a good position in the championship."