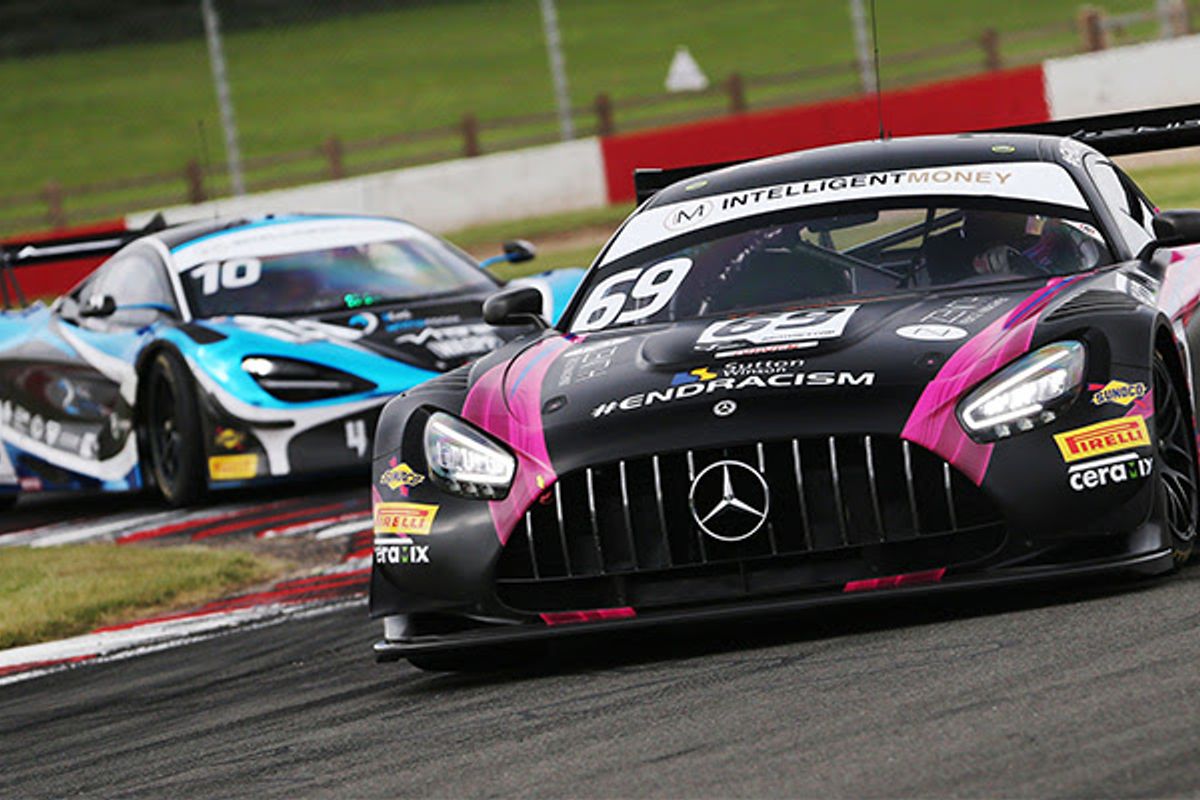 Drivers’ titles could be decided in Race 2
Six GT3 winners in as many races so far
Just 2.5 points cover GT4’s top-four crews

2020’s Intelligent Money British GT Championship campaign enters its home straight this weekend at Snetterton where the GT3 and GT4 Drivers’ titles could be decided in the second of two 60-minute sprint races.

RAM Racing’s Sam De Haan and Patrick Kujala must extend their current nine-point advantage to 38 by Sunday evening in order to wrap up the championship before Silverstone, while any one of four GT4 crews – currently covered by just 2.5 points – have a mathematical chance of clinching the GT4 crown with a round to spare.

Success Penalties, the maximum 50 points available for winning both races, and a determined cast of championship contenders mean the Drivers’ crowns are more likely to be decided in November. But as Jamie Chadwick and Ross Gunn proved at Snetterton in 2015: never say never!

Sam De Haan and Patrick Kujala became the sixth different GT3 crew to claim a victory in as many races last time out at Donington. But with five of those entries occupying the championship’s top-five positions, Snetterton’s two races will surely deliver 2020’s first repeat winners.

You certainly wouldn’t bet against Barwell Motorsport whose Lamborghinis always win in Norfolk. Indeed, Phil Keen has claimed five of the last eight victories there, including a rare double with Adam Balon in 2019. The same duo are now third in the championship and 17.5 points behind De Haan/Kujala after returning to the podium at Donington. Their second place translates into a seven-second Success Penalty this Sunday morning, but as the same crew proved last year: even the full 10s handicap can be overturned during a 60-minute sprint.

The Lamborghini’s strengths should also benefit Sandy Mitchell and Rob Collard who lost their championship lead last time out. And their chances of bridging De Haan/Kujala’s current nine-point advantage are also helped by RAM’s Mercedes-AMG serving the maximum 10s Success Penalty in Race 1. Sunday afternoon’s results will determine who heads to Silverstone with the championship advantage, or whether there’s still a title to fight for.

Buurman and Loggie – best placed of the crews without an overall win this year – have the added incentive of a Pro/Am title to play for. They’re just one point behind Balon and Keen with three races remaining.

This year’s GT4 championship fight took another twist at Donington where Patrik Matthiesen and Jordan Collard vaulted back into contention after claiming a deserved first victory of the season.

It also served to shake up the GT4 title fight, which now features four crews separated by just 2.5 points. Only a very unlikely set of results will see one of them crowned champions this weekend.

TF Sport’s Aston Martins jointly lead the way but it’s Jamie Caroline and Dan Vaughan who have the best chance to open a slight advantage in Race 1 when their three closest rivals all serve Success Penalties. Of course, the shoe would then be on the other foot if the #97 Vantage could score its first win of the season on Sunday morning.

A five-second Success Penalty also means Patrick Kibble and Connor O’Brien shouldn’t be too far behind their team-mates. In terms of wins, #95 leads the head-to-head 2-0, whereas #97 has achieved the same number of points through sheer consistency rather than outright speed.

No team has combined both of those elements better in recent rounds than Academy Motorsport. In fact, the sole Mustang has outscored every other GT4 entry since Oulton Park. A change of circumstances means Matt Cowley – who heads to Snetterton just 1.5 points off the championship lead – will now be joined at the final two events by Will Moore, who was previously set to race for the team full-time in 2020. The Ford carries a seven-second handicap in Race 1 after finishing second at Donington.

Speaking of Success Penalties, Matthiesen and Collard must overcome the maximum time on Sunday morning if they’re to maintain the pressure on their rivals. Donington’s victory provided a timely boost for HHC Motorsport’s #58 crew after a puncture hindered their championship challenge at Brands Hatch. The omens are also good for Collard who won at Snetterton in a McLaren last year.

So close is this year’s GT4 title fight that HHC’s sister car slipped from first to fifth at Donington. However, Chris Wesemael and Gus Bowers remain just 8.5 points behind TF Sport’s Astons with three races remaining.

Balfe’s Pro/Am McLaren isn’t entirely out of contention either, and especially if Mia Flewitt and Euan Hankey can add another sprint race victory to the one they collected at Oulton Park. Equally, Speedworks’ Toyota might drag itself into the mix if James Kell and Sam Smelt can score the Supra’s maiden British GT4 win.