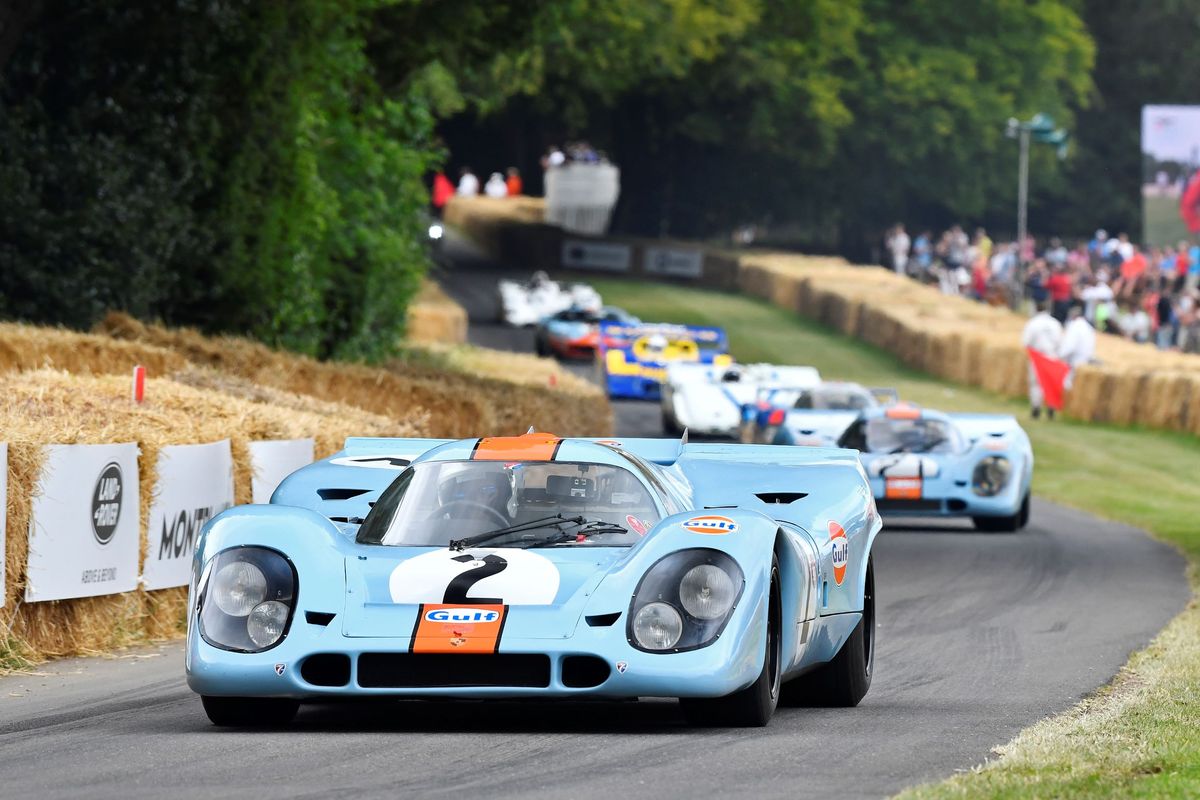 With the one-off Goodwood SpeedWeek presented by Mastercard motorsport extravaganza less than three weeks away, Goodwood can now reveal details of three world-class demonstrations featuring throughout the weekend. Celebrating the 70th anniversary of F1, the 50th anniversary of Porsche’s first Le Mans victory, and TWR Jaguars at Le Mans.

F1 at 70 will feature a once-in-a-lifetime assemblage of F1 greats taking to the Goodwood Motor Circuit. From the early eras of F1, a winning range of legendary Lotuses – an ex- Stirling Moss 18, ex-Graham Hill 49B, and two ex-Emerson Fittipaldi 72s. Between them, they have wins at the Monaco, German, Spanish, South African, Italian, British, Belgian, Brazilian, Austrian and Argentinian Grands Prix.

On the other end of the scale, a McLaren MP4/15 from 2000 will lead a selection of McLaren legends from the previous decades. From a decade later comes the ultimate underdog of the modern F1 era – the 2009 Brawn-Mercedes BGP001 used by Jenson Button in all but one Grand Prix in his unforgettable championship-winning year. These and many more will be taking to the track at SpeedWeek commemorating seven decades of the highest and most celebrated discipline in motor racing.

In celebration of 50 years since Porsche took its first (of many) wins at the 24 Hours of Le Mans will be a must-see gathering for any Porsche-phile or endurance racing aficionado. A number of the marque’s Le Mans legends will lead a high-speed family gathering for Porsche at Goodwood. The Le Mans-winning 917K that took the famous victory at La Sarthe in 1970 will accompany a selection of its winning successors including the back-to-back 1984 and 1985-winning 956B, the WSC-95, 911 GT1-98 and the latest Porsche victor, the 919 Hybrid.

To round off the demonstrations will be concerto of V12-powered Group C fury in the form of a rarely-seen gathering of Group C TWR Jaguars, spanning five years of era-defining endurance racing. Star cars will include the 1987 World Sportscar title-winning XJR-8/9, and a 1990 XJR-12 which is probably the most successful single Group C chassis, with victories including an assist in Martin Brundle’s 1988 title win. Joining these will be the Jarama-winning XJR-9 of and a veritable TWR Jaguar XJR army of Group C weaponry.

All of this will accompany the staple Goodwood line-up of the finest historic racing, rallying and supercar action in the world online and interactive, exclusively for three days, October 16-18, 2020.

As well as the comprehensive streaming options through goodwood.com and social media, SpeedWeek will be broadcast live on ITV1 and ITV4 during the event:

A selection of highlight programmes the week after the event on ITV4: