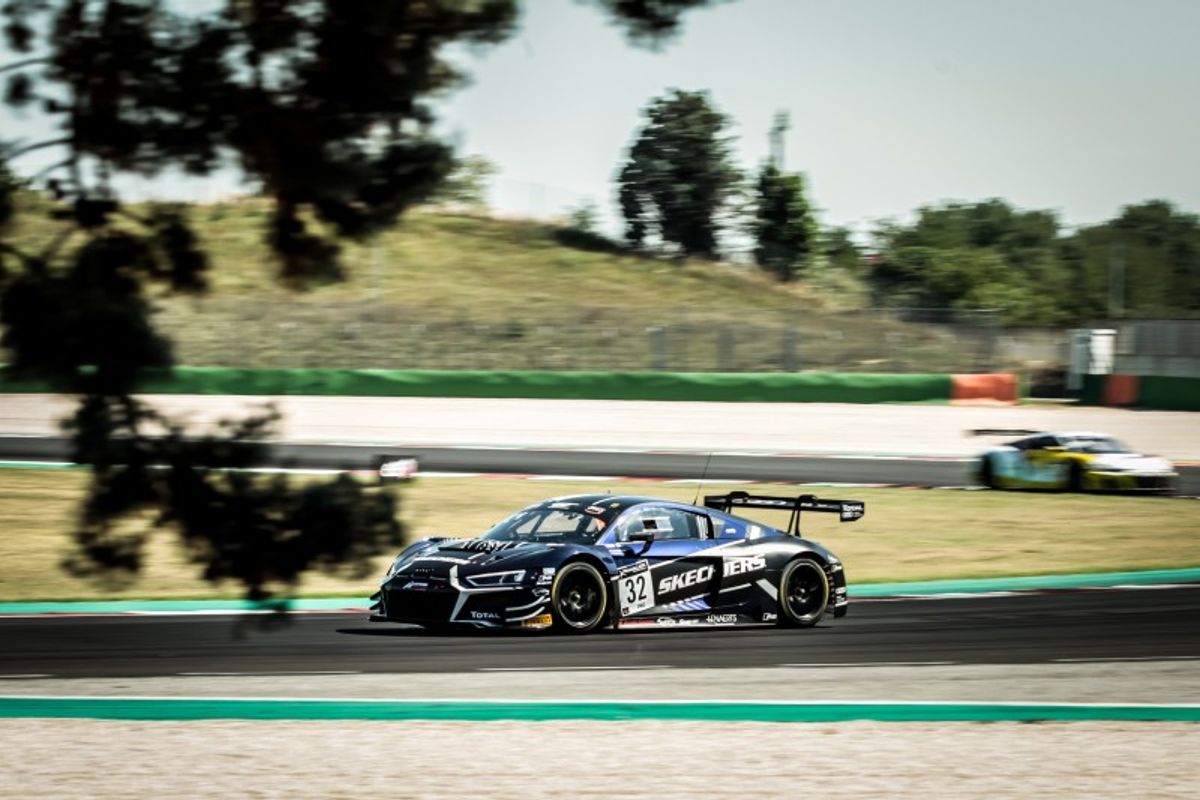 GT World Challenge Europe Powered by AWS will crown its first champions of 2020 next weekend (9-11 October) when the Sprint Cup stages its showdown event at Circuit de Barcelona-Catalunya.

A rapid-fire season that began at Misano in mid-August will culminate just two months later at the 4.65km Spanish venue, which returns to the Sprint schedule this year after hosting the Endurance Cup between 2017 and 2019.

The finale will see a trio of one-hour races play out, bringing the total number staged this year to 10. There are 52.5 points on offer, which makes more than half of the 22-car field mathematically eligible to lift the championship trophy. Realistically, however, there are two primary contenders being chased down by several dark horses.

Dries Vanthoor and Charles Weerts lead the way ahead of the finale. The #32 Belgian Audi Club Team WRT duo established a firm championship advantage by taking two wins from three outings at the Misano opener and scored well at Magny-Cours, but a difficult weekend at Zandvoort prevented them from putting a firm grip on the title.

Nevertheless, they travel to Spain with an important advantage having accumulated 60.5 points thus far. For 19-year-old Weerts, it presents an opportunity to become the youngest overall champion in GT World Challenge Europe Powered by AWS history across both the Sprint and Endurance disciplines.

The WRT Audi crew’s main opposition comes from the HRT Mercedes-AMG duo of Maro Engel and Luca Stolz, who are just 6.5 points off the top despite skipping the Zandvoort event. Having won the 2018 Endurance Cup title, stood on the podium at the Total 24 Hours of Spa and finished as Sprint Cup runners-up last term, the German pairing are no strangers to success. They will hope to put that experience to good use next weekend.

A maiden Sprint Cup victory at Zandvoort propelled Kelvin van der Linde and Ryuichiro Tomita into contention. The #31 Belgian Audi Club Team WRT pairing enter the finale on 48 points, just 0.5 ahead of Timur Boguslavskiy (#88 AKKA ASP Mercedes-AMG). The Russian racer will have regular teammate Raffaele Marciello back at his side for the trip to Barcelona after Felipe Fraga deputised at Zandvoort.

The #25 Sainteloc Racing Audi crew of Christopher Haase and Arthur Rougier are yet to win this season, but a trio of podium finishes means that they remain in the championship battle on 46.5 points. They are followed by the #163 Emil Frey Racing Lamborghini duo of Albert Costa and Giacomo Altoe on 38 points. A maiden Sprint Cup win at Zandvoort means this crew has momentum, and no one knows the Barcelona circuit better than local ace Costa.

Though the title is out of reach, the sister #14 Emil Frey Racing Lamborghini clearly has the pace to win after Mikaël Grenier and Norbert Siedler secured a pole position lockout at Zandvoort. The #107 CMR Bentley will also hope to end the campaign with a victory after Jules Gounon and Nelson Panciatici scored a pair of top-six finishes in the Netherlands. A pair of Attempto Racing Audis complete the full-pro contenders, with Mattia Drudi and Tommaso Mosca in the #55 machine and Frederic Vervisch alongside Nicolas Schöll in the #66.

The Silver Cup title is still up for grabs, but there is a clear favourite. The #26 Sainteloc Racing Audi crew of Steven Palette and Simon Gachet have been in superb form this season, capturing three class wins and two further podiums to establish a 17-point cushion. The duo also became just the second Silver entrants to take an overall win when they triumphed on home soil at Magny-Cours and will hope for more front-running pace to cement their class title in Spain.

Their closest challenger is the #90 Madpanda Motorsport crew of Ezequiel Perez Companc and Axcil Jefferies. Class winners in the third Misano contest, they will be looking to return to the top step at Circuit de Barcelona-Catalunya and ignite their title push. Should they pull it off, Madpanda would become the fourth successive Mercedes-AMG squad to take the Silver class in the Sprint Cup.

The #33 Belgian Audi Club Team WRT entry of Jusuf and Hamza Owega also remains in contention. The brothers travelled to Zandvoort on a run of five successive podiums, but a tough weekend at the Dutch track has left them 21 points off top spot. In contrast, Bentley squad CMR scored a superb class win at Zandvoort, where Hugo Chevalier and Pierre Alexandre Jean finished second overall. The title may be a long shot, but the French pairing is more than capable of another strong result at the Barcelona circuit.

The same is true of the #2 Mercedes-AMG crew of Juuso Puhakka and Oscar Tunjo. After missing the opening round due to a technical issue, the Toksport WRT pair have scored a win and two runner-up finishes. Indeed, their points-per-race ratio is marginally better than the Sainteloc duo's and they will undoubtedly be a factor for victory in Spain. Toksport will also be represented by the #6 Mercedes-AMG, with regular driver Robin Rogalski alongside a to-be-confirmed teammate.

The #15 Tech1 Racing Lexus crew of Thomas Neubauer and Aurélien Panis finally earned their first win of the season at Zandvoort. Their pace has never been in doubt and more of the same would be no surprise this weekend. AKKA ASP has also shown speed but has taken just one podium this term, a surprise given the team's Silver Cup pedigree. As such, drivers Jim Pla and Benjamin Hites will hope to end the season on a high note.

While the overall title battle is wide open and the Silver crown remains up for grabs, the Pro-Am championship is close to being settled. Sky Tempesta Racing has taken six wins from seven races this term, with the full-season #93 Ferrari crew of Chris Froggatt and Eddie Cheever III triumphing on four occasions. The duo leads the way on 104 points, 29 clear of their closest rivals, and would all but guarantee the title if they win the opening Barcelona contest.

Louis Machiels and Andrea Bertolini are next on 75 points. The #52 AF Corse Ferrari duo took a win at Misano and will need a return to the top step of the podium if they are to challenge the Tempesta squad. These two crews are also battling for the combined Pro-Am championship, adding extra importance to events in Spain.

Valentin Pierburg also remains an outside bet on 70.5 points and will certainly be a contender for runner-up spot. The German driver has scored six podiums from seven races this term and will be re-joined by regular co-driver Dominik Baumann after Nick Foster did a strong job at Zandvoort. ERC Sport completes the grid with its #18 Mercedes-AMG and, after Lee Mowle and Phil Keen scored a maiden class podium last time out, will hope to finish the season with a flourish in Spain.

After official testing on Thursday the Barcelona event kicks off on Friday with free practice sessions at 10.00 and 14.50. Saturday will begin with pre-qualifying at 09.15, followed by the first qualifying session of the weekend at 12.50. This will set the grid for the opening race, which goes green at 17.15.

The battle for the overall Sprint Cup title is guaranteed to be alive on the final day of the season. Two more qualifying sessions will take place back-to-back at 09.00 on Sunday, establishing the grids for the season-closing contest. Race two will get underway at 12.25, followed by the final Sprint event of the year at 16.30. One hour later, the first GT World Challenge Europe Powered by AWS champions of 2020 will be known.

There will be added on-track action from regular support categories Formula Renault Eurocup and Lamborghini Super Trofeo. What's more, the popular TCR Europe will bring a competitive grid for its maiden outing alongside GT World Challenge Europe Powered by AWS. This will act as a prelude to the tin-top championship joining the support programme at the Total 24 Hours of Spa (22-25 October). For now, however, all eyes are on Circuit de Barcelona-Catalunya where the Sprint Cup is set to be decided in a Spanish showdown.