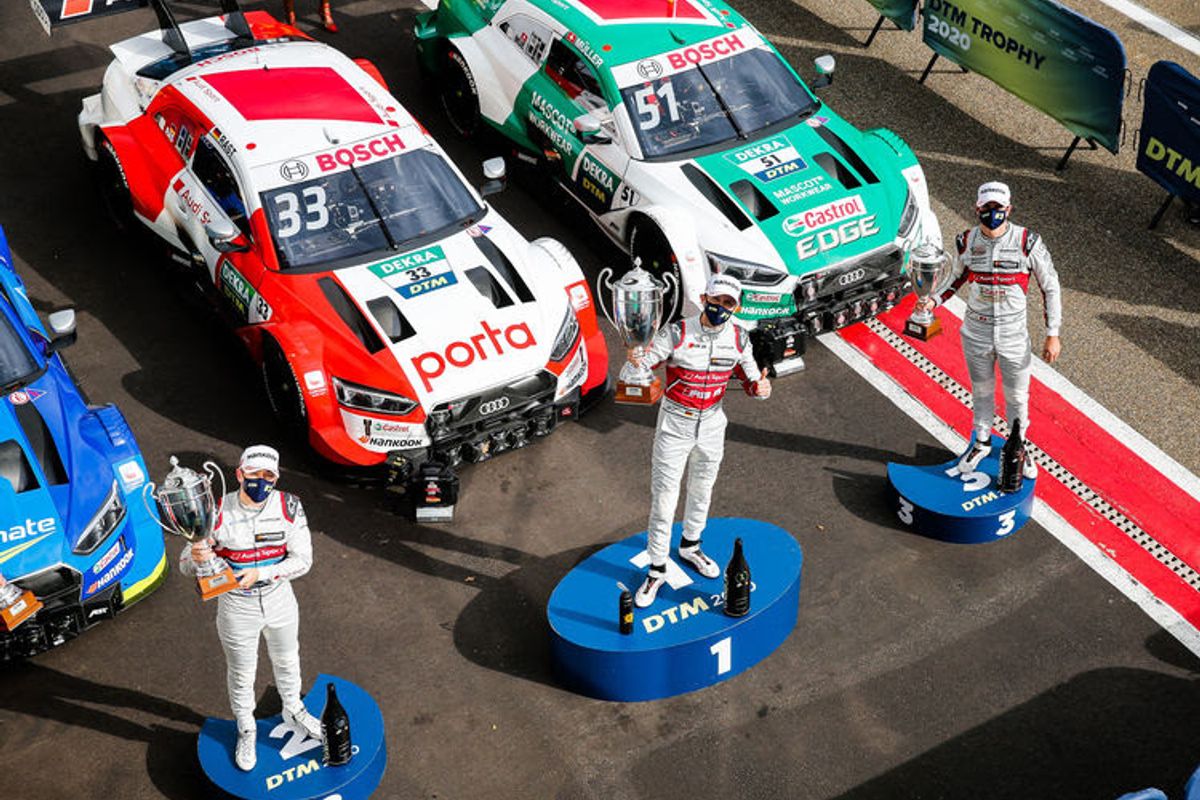 The championship triple is sealed: With a one-two-three success at Zolder, Belgium, Audi has also prematurely secured the drivers’ title in the DTM following the Manufacturers’ and Teams’ Championships. On Saturday, the podium was occupied by the three drivers who will decide the title among themselves in the remaining five races: René Rast, Robin Frijns and Nico Müller.

For Audi, this is the twelfth driver’s title in the DTM and the fourth championship triple after 2004, 2017 and 2019. “Having all three championship titles in your pocket so early in the season is extraordinary,” said Head of Audi Motorsport Dieter Gass. “I don’t believe that this has ever happened before in the DTM. It shows how unbelievable the 2020 season is for Audi. Today was another fantastic day for the Four Rings: We had all three title contenders on the podium and also secured the third title.”

The man of the day was René Rast from Audi Sport Team Rosberg. In qualifying, the two-time DTM Champion grabbed first place on the grid in the very last moment from BMW driver Timo Glock. Rast thus prevented Audi’s series of pole positions in the DTM from being interrupted. For the 20th time in a row, an Audi RS 5 DTM started from the best place on the grid.

Although he had to start the race on the still wet side of the track, Rast immediately took the lead securing a commanding lights-to-flag victory, which he also crowned with the fastest lap. “My thanks go to my team today, because I think we had by far the fastest car in the entire field,” said Rast after crossing the finish line with a lead of more than 18 seconds. “It’s a gigantic feeling to come back like this. Today we had the pace we were missing last time. We have shown that you shouldn’t write us off. In 2017, we’ll have made up a similar gap in the championship.”

With his 18th pole position and 21st victory in the DTM, Rast reduced the gap on championship leader Nico Müller to 34 points. The Swiss from Audi Sport Team Abt Sportsline had to settle for seventh place in qualifying. “I was not happy with the balance of my car,” said Müller. “This put us in a difficult position for the race. To finish third on a track where it’s very difficult to overtake is pretty good. But it’s clear that we want to be in front of René and Robin again tomorrow. We will work hard overnight to achieve this.”

Müller’s teammate Robin Frijns in second place also managed to reduce the gap in the overall standings. The Dutchman, who lives in Belgium, had set the fastest time in both free practice sessions on Friday. From third place on the grid, Frijns immediately moved up to second place behind René Rast, but was unable to keep up with the pace of the leader. “Unfortunately, I lost a position to Timo (Glock) after my pit stop, which cost me quite a bit of time,” said Frijns. “I had to push my tires very hard for a few laps to get back second place. After that, I just concentrated on securing second and took it easy on my tires. The result is good, but tomorrow we have to be faster.”

Customer team WRT Team Audi Sport also had reason to celebrate at their home race: With fifth place, Harrison Newey achieved the best result of his still young DTM career. The only 22-year-old Briton had already grabbed attention with eighth place on the grid and was running ahead of Nico Müller in the race for quite a while. Ferdinand Habsburg also scored points for the Belgian Audi customer team with seventh place.

A rather poor score, on the other hand, for Audi Sport Team Phoenix: Mike Rockenfeller was running third after the start of the race. The 2013 DTM Champion dropped back to the back of the field when the pneumatic lifting system of his Audi RS 5 DTM failed during his pit stop. “Rocky” still fought his way up to eighth. Teammate Loïc Duval had to serve a five-second penalty due to a jump start and finished tenth.

Jamie Green retired early: The Briton had several touches with Philipp Eng. In the process, his Audi RS 5 DTM was so badly damaged that he had to park his car in the pit lane after 29 laps.

Audi Sport Team Abt Sportsline profited from this in particular, extending their lead in the teams’ standings to 224 points. As a result, the team of Nico Müller and Robin Frijns could secure the Teams’ Championship early on Sunday