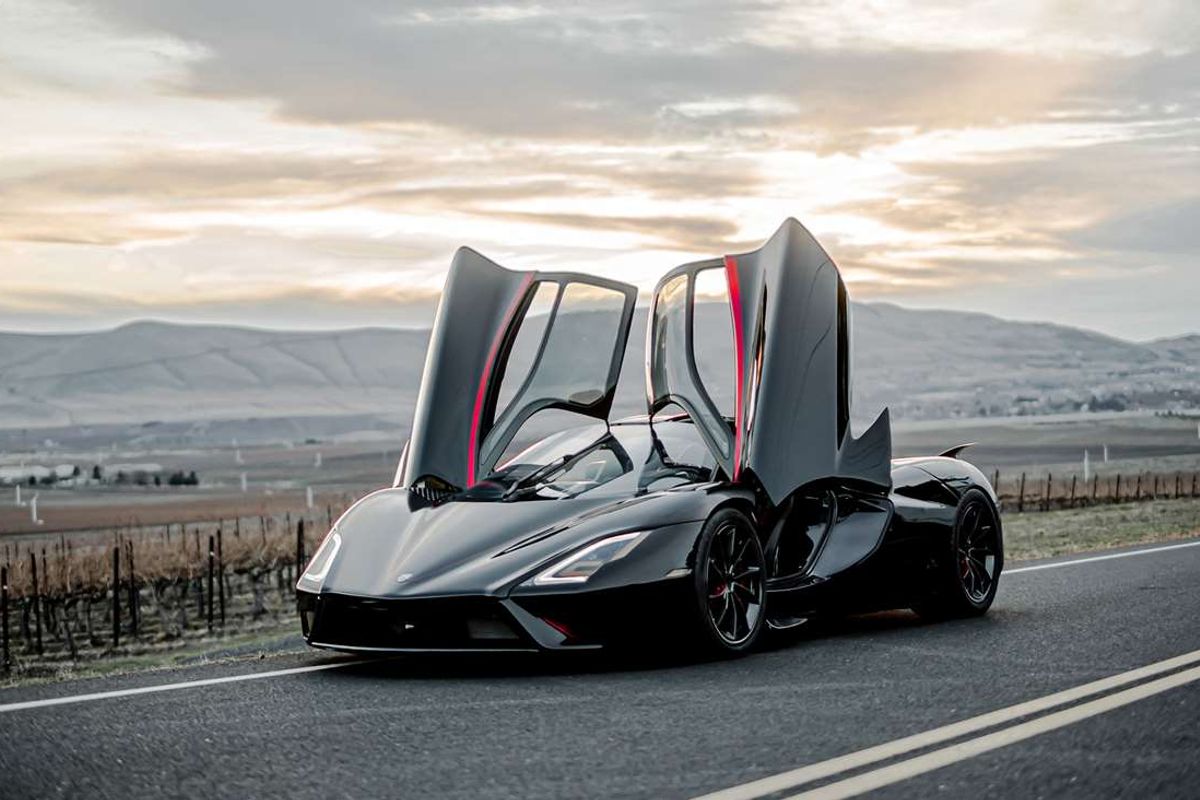 This motley crew of seven of the coolest supercars you can expect to see at SpeedWeek has massive variety. From pure electric power, to a screaming V10, the roofed and the roofless, the retro and the futuristic, the mainstream and the boutique. Let’s round them up.

McLaren Elva
Retro-futurism on four wheels could be the perfect description of the McLaren Elva. The silhouette borrows much from the kind of monstrous ‘60s sports racers you’d find racing in the Whitsun Trophy here at Goodwood. Yet it uses a bleeding-edge carbon tub, an 815PS twin-turbo V8 and clever aerodynamics to ‘simulate’ a windscreen. £1.425 million is the entry price for one of the 149 they will make. Two of them will be at SpeedWeek, one on track and one on display, alongside a selection of other McLarens from the past, present and future.

Jannarelly Design-1
Leaning even harder on the lusty shapes of the past, this visual tribute to Cobra and Co comes all the way from the UAE. Weighing just 950kg (at most!) with a manual gearbox, 3.5-litre V6, no driver aids and tiny footprint, it’s a modernised slice of the old-school. More exotic than a Caterham and prettier than an Atom, when you see and hear the Design-1 at SpeedWeek, you might fall in love.

Lamborghini Huracan EVO RWD
Now into the present, and a trio of the latest greatest dealer-bought supercars, starting with the Lamborghini Huracan EVO RWD. The latest iteration of the ‘baby Lambo’ brings rear-wheel-drive and we think the best styling package yet used on the Huracan. If nothing but naturally-aspirated will do, the Huracan’s V10 continues to deliver in a supercar on its finest form to date.

Ferrari F8 Tributo
Ferrari’s latest mid-engined Berlinetta packs a Challenge-derived engine (borrowed from the 488 Pista) and smoothed-over, handsome looks. With well over 700PS the F8 Tributo should prove a worthy tribute to that award-winning V8 engine. It’ll join a number of other rarefied V8 and V12-powered prancing horses at SpeedWeek.

SSC Tuatara
Stepping into the future we have two wildly different flavours of the most extreme cars to come. Starting with the ultra-exclusive, boutique, never-seen but oddly familiar SSC Tuatara. To look at it you’d wonder if it had travelled back in time to us. Yet when it fires up, the oddly familiar fury of a monstrous American V8 is reassuring. The Tuatara is a serious bit of kit and SSC are serious about its potential. This 1,750PS+ hypercar has eyes on the top speed prize, looking to 300mph and beyond. This will be the first time anyone this side of the Atlantic has seen it in action properly.

Lotus Evija
Lastly, on the total other end of the spectrum to the SSC, is the Lotus Evija – the latest home-grown hypercar entry from the long-lived F1 championship-winning marque. Quite unlike anything else Lotus has ever made, the Evija brings 2,000PS of pure electric power to the party and four-wheel torque vectoring. That electric powertrain and the liberties it has granted its designers means the Evija is also one of the prettiest of the latest crop of hypercars.