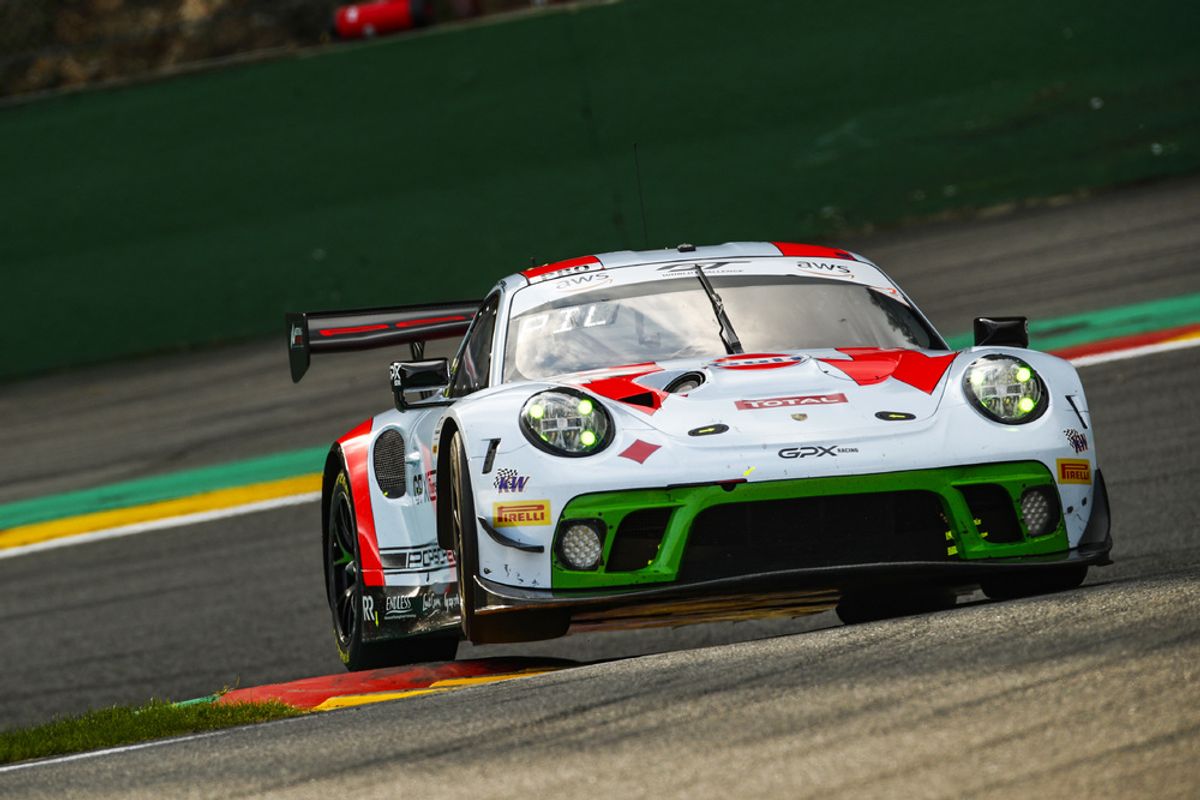 Porsche’s customer teams showed excellent form during qualifying for the 24 Hours of Spa-Francorchamps. At the rainy session in Belgium, seven 911 GT3 R made it into the Super Pole. The 20 fastest vehicles from Thursday’s qualification will take part in today’s final shootout for the top grid spots, which begins at 6:20 pm (CEST). The 24-hour race takes off on Saturday at 3:30 pm.

After two practice sessions in dry and partly sunny conditions, the teams were confronted with completely different conditions in the evening qualifying. Shortly before the start of the session, heavy rain set in. The qualifying was divided into four segments, with the average time of each driver crew determining the ultimate result. Facing extremely slippery track conditions during the second segment of the hunt for top times, Matt Campbell was in particularly strong form in the No. 12 Porsche run by last year’s winning team GPX Racing. The young Australian works driver turned the quickest lap of his qualifying segment in 2:35.013 minutes – with a gap to the second fastest car of just over 0.7 seconds. His French teammates Patrick Pilet and Mathieu Jaminet also set fast lap times. The No. 12 vehicle concluded the overall timed practice as the best Porsche in second place.

GPX Racing’s No. 40 sister car finished the session on seventh. The two 500+ hp 911 GT3 R fielded by Rowe Racing as well as solo entries of the customer teams Dinamic Motorsport, KCMG and Frikadelli Racing also made it into the Super Pole. Driving for the German Frikadelli squad, Porsche brand ambassador Jörg Bergmeister delivered a remarkable performance: The seasoned specialist from Langenfeld in Germany stepped in for his brand colleague Timo Bernhard at short notice. Without any preparation and not a single practice lap so far during the race week, Bergmeister set the eleventh quickest time in the No. 22 car. For the race, he shares the cockpit with the Frenchman Frédéric Makowiecki and Dennis Olsen from Norway.

Qualifying quotes
Sebastian Golz (Project Manager Porsche 911 GT3 R): “From Porsche’s point of view, that was a terrific qualifying. We have seven 911 GT3 R in the Super Pole, which makes us the manufacturer with the most cars in the shootout for the top grid spots. The collaboration with our customer squads works extremely well. The technicians are doing great work and the drivers are tapping the full potential of the car. What Jörg Bergmeister achieved in the rain and the dark is almost inconceivable: he hasn’t driven the Porsche much this year and he isn’t at all familiar with the tyres. It’s almost impossible to appreciate his performance highly enough.”

Matt Campbell (Porsche 911 GT3 R #12): “Everything ran perfectly for us in the qualifying. My lap was flawless, the team gave our car the perfect setup and my teammates were incredibly strong. Second is a great result. Tomorrow it’s about chasing the final grid spots for the race. We’re tackling the Super Pole feeling very confident. It’ll certainly be an exciting shootout.”

Jörg Bergmeister (Porsche 911 GT3 R #22): “That was definitely the craziest thing I’ve ever done – I hadn’t turned a single lap in the Frikadelli-Porsche at Spa-Francorchamps before taking part in the first qualifying. That was quite an intense experience in the dark and the rain and on totally unfamiliar Pirelli tyres. Eleventh in the session is not bad at all. I’m very happy with that result. Hopefully, I’ll get some laps in during the night practice before the start of the 24-hour race on Saturday.”

Richard Lietz (Porsche 911 GT3 R #47): “We don’t have as much experience with the car and particularly the tyres as many of our colleagues. So, the qualifying was part of an intensive learning process for us. We’ve qualified for the Super Pole and in the process we’ve gained a lot of important insights. We’ll definitely make more progress in the lead-up to the race.”

Nick Tandy (Porsche 911 GT3 R #98): “That qualifying was a real test of patience. Again and again, I had to abandon flying laps because I was held up in the heavy traffic. At some point, I got a halfway decent free lap and I grabbed my chance. My teammates’ laps were good as well. We’ve reached the desired top 20, so we can be very satisfied.”

Dirk Werner (Porsche 911 GT3 R #99): “The track conditions were difficult and surprising. We drove in the dark for the first time and then in the wet. That was a little like jumping into cold water in terms of the suspension setup, air pressure and the ideal racing line. So I’m thrilled that we made it into the top 20 qualifying. Tomorrow the cards will be reshuffled. We learned a lot from this session which we will use to prepare for tomorrow’s Super Pole.”

Matteo Cairoli (Porsche 911 GT3 R #54): “The conditions were incredible tricky. The grip kept changing, and we had a lot of traffic on the track. I didn’t get a free run. More would have been possible, but that’s no longer important. We’ve secured a place in the Super Pole. That was our goal – and we achieved it.”