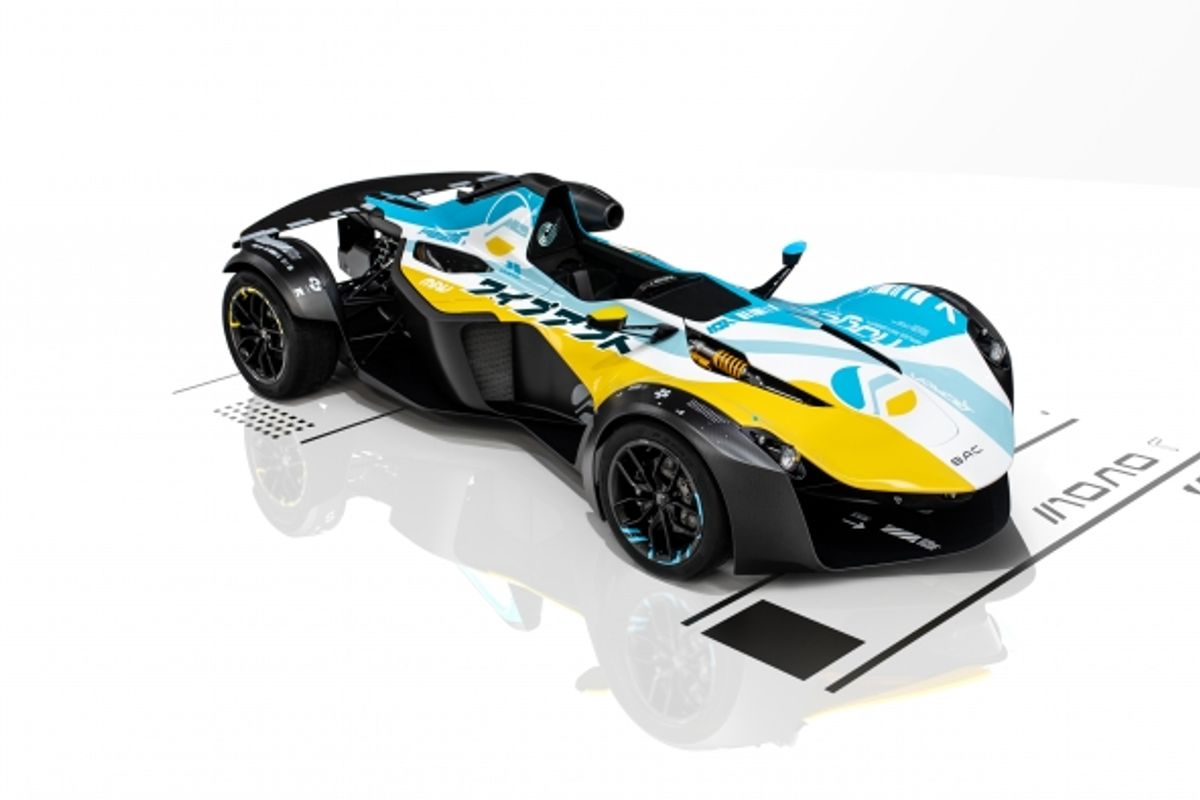 Mono R #1 is inspired by the iconic Sony PlayStation anti-gravity racing series ‘WipEout’, paying homage to the most recognisable and popular team of the series – ‘FEISAR’.
BAC collaborated with original WipEout co-creator and GamevDesigner Nick Burcombe, as well as acclaimed modern WipEout Graphic Designer Eddie Wainwright to create the stunning livery.
Mask and painting processes took over 10 days to perfect, with over 400 individual FEISAR team livery graphics featuring throughout.
Collaboration sees the union of two Liverpool icons, as the series of 10 WipEout games were created in the city BAC proudly calls home.
WipEout-inspired supercar is the first of only 30 BAC Mono R models that will be delivered around the world.
Briggs Automotive Company (BAC) has officially delivered the first BAC Mono R supercar to a European customer, finished in one of the most unique and outrageous liveries ever produced by the company.

The hyper-futuristic series proved to be an overwhelming global success, with several million units sold across the world throughout its reign since 1994. The most recognisable – and iconic – team to feature across the WipEout series is ‘FEISAR’ (Federal European Industrial Science and Research), which the first-ever BAC Mono R pays homage to.

Mono R #1 is finished in the classic FEISAR blue, yellow and white scheme, plus three additional colours feature alongside visible carbon aspects. The intricate masking and painting process took over 10 days to complete, with over 400 complex painted graphics spread across the supercar’s body in line with the FEISAR racing ship’s design.

BAC is known for offering the ultimate scope for customisation, with every supercar that leaves the Liverpool factory being a One of a Kind, one-of-one model. So, when the realisation of a WipEout-inspired dream was tabled by the first Mono R owner in January 2020, the design team relished the challenge.

Burcombe famously had the idea for WipEout while drinking with local visionary 3D artist Jim Bowers at a pub in Merseyside, before going on to lead design operations for the game through Psygnosis at their Liverpool base – just a few miles away from BAC’s HQ in the city.

BAC also has an extensive history in Sony PlayStation games, with the Mono supercar featuring in the likes of Grid, Need For Speed, Project Cars 2 and 3 and DRIVECLUB. On top of this, Mono will appear in the upcoming Gran Turismo 7 game for PlayStation 5.

The WipEout-inspired Mono R is the first car of only 30 that will be delivered around the world by BAC, before the new-generation, turbocharged BAC Mono enters production.

The proud owner of Mono R #1 said: “When playing WipEout on the PlayStation, I often dreamt of one day being able to fly around different race tracks for real in my own FEISAR ship. It’s not quite anti-gravity racing… but the frankly outrageous Mono R gives me the exact same sensation. It’s a true feat of engineering, technology and design – and with the way it looks, it certainly wouldn’t be out of place in any WipEout game!"

Ian Briggs, Co-Founder and Design Director at BAC, added: “Mono R is a very special supercar – a record-breaking, bar-setting, super-exclusive model the likes of which the world has never seen before. It’s only fitting, then, that the first car to leave the BAC factory is one of the most special we’ve ever produced. As always, the BAC design team left no stone unturned when it came to creating the perfect livery and it was a true pleasure working with Nick and Eddie bringing their genius to life. We’re no strangers to turning heads with our supercars, but R #1 may just turn more heads than ever.”