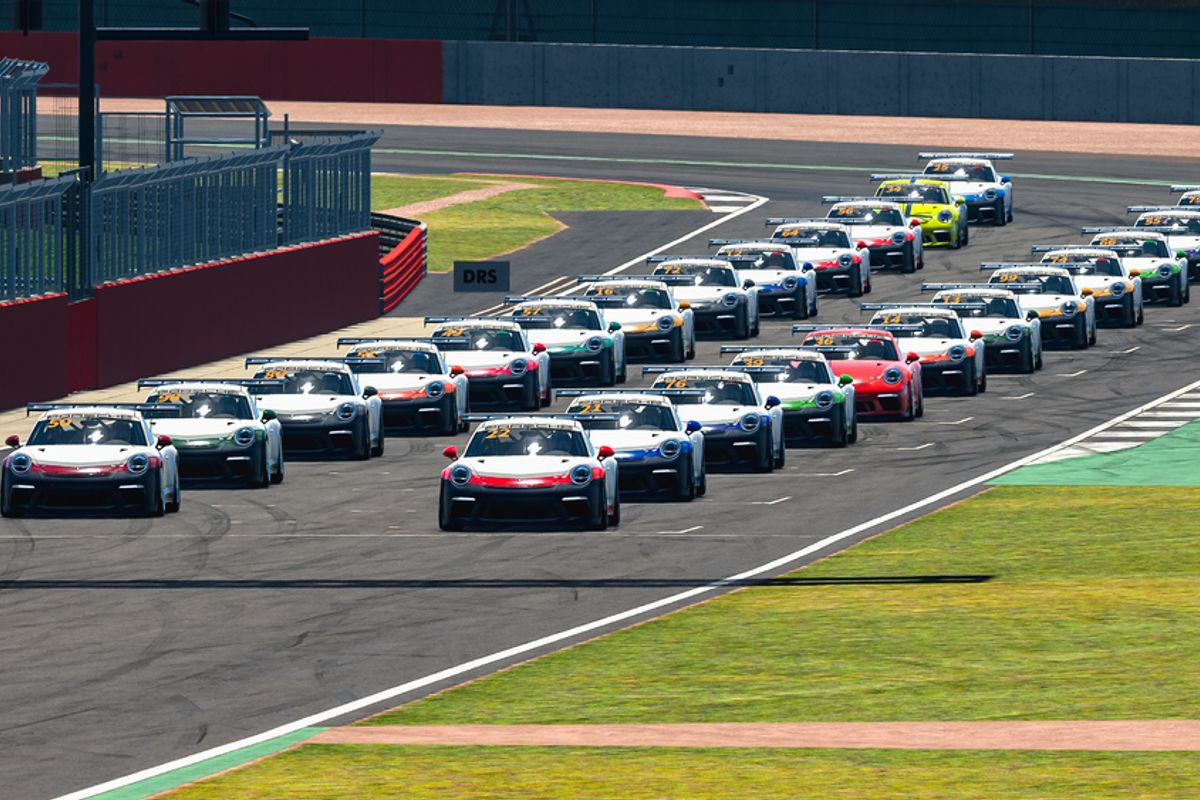 Esports star Job was the pacesetter in practice, maintaining that form into qualifying to secure the championship's first pole position by a narrow margin. The British youngster converted his front row start into race one victory with a confident lights-to-flag run, but in an action-packed second race featuring a reversed grid for the top six finishers, exactly the same as the real-world championship, it was Kevin Ellis Jr who delivered an impressive performance for the win. Graham Carroll, Peter Berryman and Josh Thompson were amongst the other sim racers to feature heavily throughout the opening weekend.

Qualifying
Taking place on a realistic virtual rendering of the challenging 3.6-mile Silverstone Grand Prix circuit, the 20-minute qualifying session saw close competition with less than one-second covering the top 15 entrants. Job worked together with Red Bull Racing Esports teammate Graham Carroll to employ a slipstreaming strategy, in turn they followed in one another's wake allowing them each to gain top speed on the famously fast Silverstone circuit.

Job and Carroll spent much of the session separated by just 0.083secs with Irishman Peter Berryman in third. However, with six minutes remaining on the clock, Kevin Ellis Jr jumped to with 0.203secs of the time of provisional polesitter Job to claim P3. In the final moments of the session, Berryman found more pace to leap into second spot – splitting Job and Caroll. Guest entrants Webster and Martin would qualify P25 and P27 respectively as the pair of real-life racers got up to speed with the unique skills required by the world of professional sim racing.

Race one
At the start of the weekend's first race Job maintained his lead, but behind him a three-car battle for second ensued despite a fast-starting Berryman who was able to retain his grid position. Ellis Jr and Carroll ran side-by-side through the Maggots and Becketts complex, Ellis Jr moving ahead. With five minutes of the 25-minute race complete, Ellis Jr slid sideways at Club allowing Carroll to make gains. Tucked un-der the rear wing of Ellis Jr, Carroll stayed with his opponent before making a pass at Brooklands. The order at the front was now: Job, Berryman and Carroll.

Just behind the leading trio an intense battle developed between Josh Thompson and Jamie Moone for fifth. Thompson initially got ahead, though the two would swap places on more than one occasion before the flag fell. As Job maintained a half second lead back to Berryman at the front, the fight between Thompson and Moone became the focus of the race – intensifying as the minutes ticked by. Push-ing hard, Thompson drove up to the back of Ellis Jr bringing Moone along with him and making the dice for third a four car fight between Carroll, Elliss Jr, Thompson and Moone.

In their quest for a top 10 finish, Jordan Weekes and Jack Sedgwick engaged in a thrilling dual. Sedgwick tried everything to find a route by his rival before eventually making a move stick. In the final moments of the race a growing train of cars stretch-ing from Carroll in P3 back to Isaac Price in P8 was nose-to-tail, but it was Moone who occupied the all-important sixth position that would afford him reverse grid pole position for the day's second race. Job took the chequered flag for victory in the first ever Porsche Esports Carrera Cup GB race, joined on the virtual podium by Berryman and Carroll.

Race two
The grid for the second race was determined by reversing the top six finishing positions from race one, similar to the system empolyed in the real-worl Carrera Cup GB second race. That placed Moone on pole position joined on the front row by Thompson, while Ellis Jr and Carroll shared row two with Berryman and Job on row three. At the start Ellis Jr made a great getaway, passing Thompson for third before the first corner. From his P6 starting position, Job was slow off the line, slipping back to P13 on the opening lap of the race. As the leaders made their way around the lap, a charging Ellis Jr made a successful move for the lead in the final sector, behind him Carroll challenged Thompson for third. As the cars began their second lap the order at the front was: Ellis Jr, Moone and Carroll – with Thompson now relegated to fourth.

In their close fight for second spot there was contact between Carroll and Moone in the early stages of the race, displacing Carroll to fifth though he immediately recov-ered to fourth behind Thompson. With less than 20-minutes remaining on the clock Thompson overtook Moone at Stowe, grabbing second position, while Carroll soon followed him through for third. Shortly afterwards Carroll mounted a challenge on Thompson for second, slipping down the inside at Stowe to complete his recovery from the earlier setback.

With 15-minutes remaining, a recovering Job found a route around Jamie Fluke through Becketts for P6, then successfully passed Moone for fifth before Luffield. In the final five minutes of the race, despite maintaining a close watching brief, Thompson could do little about Carroll in third and was soon under attack from Ber-ryman behind – the latter securing a pass before Vale. Job – now the fastest driver on the track – closed onto the rear of Thompson, a three car fight for third between Berryman, Thompson and Job ensued but despite Job's best efforts the order would remain the same to the flag with Ellis Jnr taking the win from Carroll and Berryman.

Following the successful introduction of Porsche Esports Carrera Cup GB the championship moves onto Oulton Park's International circuit for rounds three and four on Sunday 17 January. The tight and twisty 2.6-mile layout contrasts starkly with the fast, open, Silverstone Grand Prix circuit, with many of the competitors used to racing on larger international tracks. The challenging Cheshire circuit could well upset the form guide and will certainly build on an exciting and close-fought open-ing weekend.