Two exceptionally close and exciting races saw wins shared between Jamie Fluke and Kevin Ellis Jr – both races were broadcast live online via the Porsche Twitch and YouTube channels. 2020 Porsche TAG Heuer Esports Supercup champion Sebastian Job took a front row starting position and victory on the road in an expertly controlled race one, however a post-race time penalty for the Esports star handed victory to Fluke. Ellis Jr delivered a superb defensive drive in the second of the weekend's races – fending off the advances of Job on the final lap to take his second win of the season. Job maintains his advantage at the top of the table as the championship approaches its midpoint next weekend at Snetterton.

Qualifying
A grid of 26 professional sim racers, including guest drivers 2014 Porsche Carrera Cup GB champion Josh Webster and 2020 race winner Will Martin, took part in a 60-minute practice session followed by a 20-minute qualifying session to set the grid for the first of the day's two 25-minute races. Peter Berryman was the early pacesetter with Jamie Fluke sitting just one-tenth of a second behind on the famous 2.48-mile Grand Prix circuit.

Despite topping the practice session timesheet, Job struggled to obtain a clear run in the first half of qualifying, his battle with traffic saw him siting fourth in the closing stages of the session. However, in the very dying moments Job improved to move to within just 0.035secs of Berryman's time, Ellis Jr was third, joined on the second row of the starting grid by Fluke.

Race one
At the start of the weekend's first race, Berryman and Job made an even getaway off the line, Job slotting in behind his rival as they exited Redgate and navigated Hollywood and Craner Curves. Under braking at Old Hairpin Berryman left the circuit allowing Job to take the race lead. However, momentarily slowed by Berryman's exit, Job came under immediate attack from Ellis Jr who got a run on him to snatch the lead into McLeans. As the leaders entered their second lap Ellis Jr and Job were side-by-side, Job soon retaking the lead making the order at the front: Job, Ellis Jr, Fluke and Graham Carroll.

With 20 minutes of racing remaining, an error by Ellis Jr at Fogarty Esses saw him take a short trip through the gravel emerging in fifth – behind Jon Robertson and ahead of Jack Sedgwick. A few laps later, a recovering Ellis Jr found a route by Robertson to take fourth while ahead of him Fluke – now second – closed the gap to Job. With just over 10 minutes left on the clock, Fluke made a mistake which allowed Carroll to close to within three-tenths of a second of him and handed valuable breathing space to race leader Job.

With five minutes to go, a midfield fight between Simeon Lynch and Miroslaw Nastalczyk ended in the gravel trap when Lynch took a lunge up the inside of his rival at Coppice. The pair rejoined the track together and continued their dice all the way down Starkey's Straight – Lynch eventually coming out on top. Shortly afterwards it was Job who took the flag to record his fourth win of the season, joined on the podium by Fluke and Carroll. Berryman completed a noteworthy recovery drive to finish the first race in P9. With the top six finishers reversed for race two, Sedgwick's six place finish secured him pole position for the weekend's second race.

Following the race, for his incident with Berryman on the opening lap Job was given a 10 sec penalty applied to his final race time, relegating Job to a finishing position of seventh. As a result of Job's penalty, Fluke was promoted to first, Carroll to second and Ellis Jr to the final podium position. For the incident between Lynch and Nastalczyk, Lynch was handed a 10 sec time penalty to be added to his race time. For a separate incident between Jamie Moone and Lynch on the opening lap, Lynch was given a further 10 sec time penalty. An incident on lap 15 between Moone and Peter Berryman resulted in Berryman being given a 10 sec time penalty to be applied to his final race time.

Race two
The grid for the second race was determined by reversing the top six finishing positions from race one. Pole position went to Sedgwick with Robertson lining-up alongside, Ellis Jr and Carroll made up row two with Fluke and Job on row three. Ellis, Carroll and Job all made good starts when the green flag was waved, but Robertson slipped down the order leaving Sedgwick initially leading the race from Ellis Jr and Carroll. At Fogarty Esses, Sedgwick ran wide allowing Ellis Jr enough momentum to take first place at Melbourne Hairpin. Compounding his losses, Sedgwick received a slow down punishment for cutting the Esses and was immediately passed by Carroll and Job emerging P7 behind Berryman – the latter putting together an excellent recovery from his misfortunes in race one.

With 18 minutes of racing remaining, a charging Job put Carroll under increasing pressure in their fight for second position. Job got alongside his rival at Melbourne Hairpin but Carroll just managed to stay ahead. However, a repeat of the move just one lap later saw Job triumph. By lap six Job had closed onto the back of leader Ellis Jr and a six-car train began to form led by Ellis Jr and Job with Carroll, Fluke, Berryman and Robertson all in close proximity to one another.

With nine minutes of racing to go, Ellis Jr lost traction out of Coppice giving Job a run on him down Starkey's Straight, through Fogarty Esses and around the Melbourne Loop – Ellis Jr putting in an excellent defensive drive to deny Job at every opportunity. The pair emerged onto Wheatcroft Straight side-by-side, Job forced to the outside of Ellis Jr with Carroll looking to Job's inside. At Redgate, Job ran wide on the outside of the corner allowing Carroll to snatch second spot and permitting Ellis Jr to maintain his advantage out front – a reshuffle Ellis Jr had controlled from all the way back at Coppice on the previous lap. A better run through the Esses soon gave Job the inside on Carroll at Melbourne Hairpin, restoring the order; Ellis Jr, Job, and Carroll.

With two laps remaining Job closed onto the rear wing of leader Ellis Jr establishing a thrilling finalé – a carbon copy of last weekend's nail biting final lap in race two at Oulton Park. The pair exited Goddards side-by-side to start their final tour. Once again Job went to the outside at Redgate putting Ellis Jr ahead through Hollywood, down Craner Curves to Old Hairpin. Job got his nose alongside at Coppice but this gave Ellis Jr the inside at Fogarty Esses, now slightly on the back foot and keen not to come under attack from behind, Job was forced to defend from Carroll at Melbourne Hairpin leaving Ellis Jr clear to claim his second victory of the season.

After the race, an incident between Jordan Weekes and Ryan Parkins on lap five resulted in a 10 sec penalty for Parkins, applied to his final race time. For an incident between Thomas O’Leary and Nastalczyk on lap eight, a 10 sec penalty was applied to Nastalczyk's race time. Following the weekend, Lynch has now surpassed an accumulated penalty time of 30 secs, the driver will not be permitted to participate in qualifying for round seven and will start from the back of the grid.

Following the Donington Park weekend Job retains his advantage at the top of the driver's championship table with a 20 point lead over race two winner Ellis Jr. The championship arrives at its midpoint on Sunday 31 January at Snetterton in Norfolk, the two-mile 200 circuit layout boasting a pair of long straights with two key overtaking opportunities that will ensure another thrilling weekend of Porsche Esports Carrera Cup GB racing. 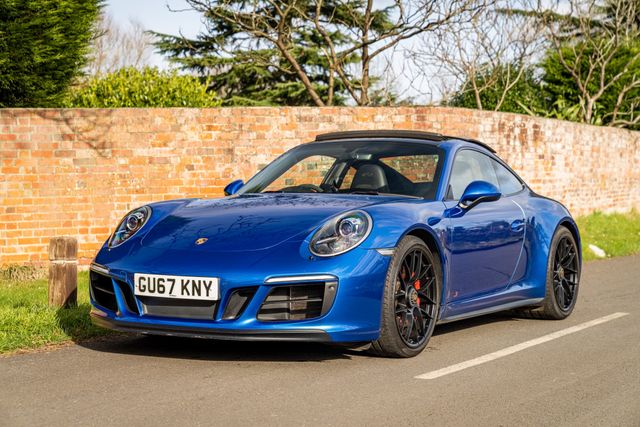