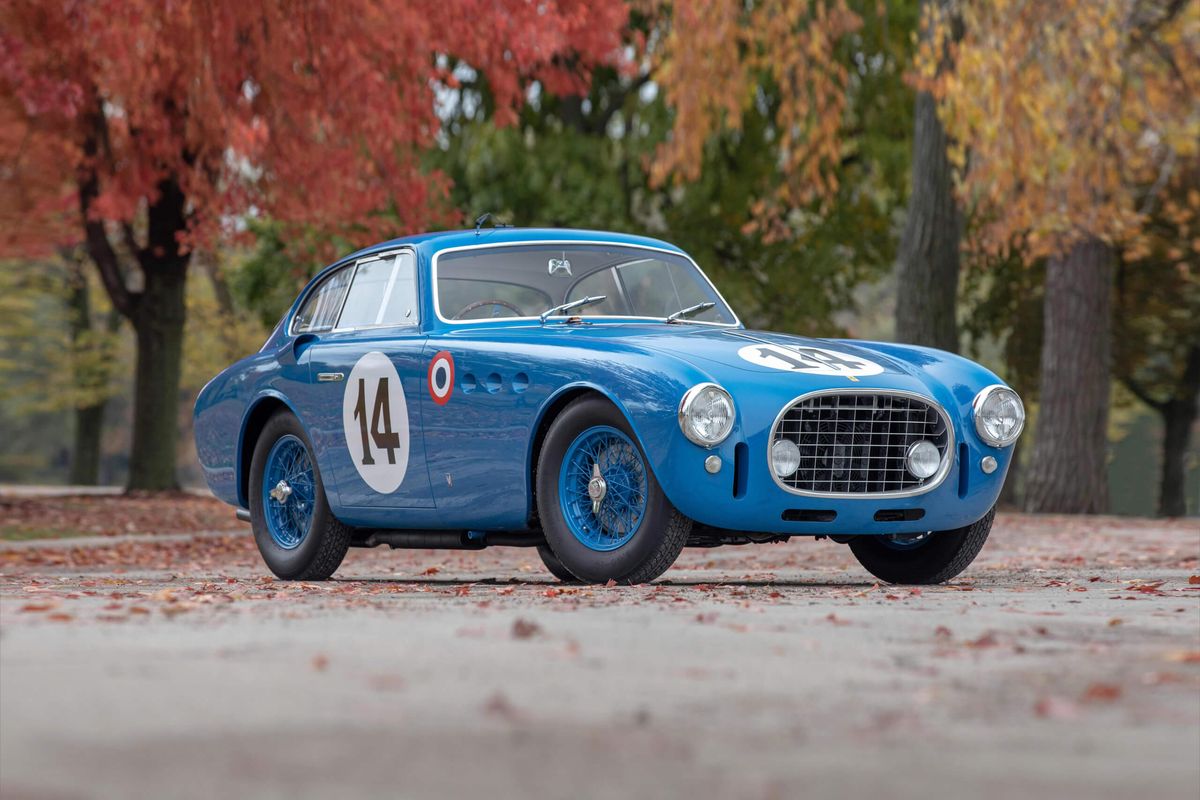 Following its European racing run, the car was exported to the U.S. via Luigi Chinetti
Chinetti is reputed to have sold the car to defense attorney Bill Galvin
Paul Owens of Texas later purchased the car and installed a Chevrolet V-8 engine

The car was also fitted with a Devin fiberglass body
Drag racer Mike Sanfilippo purchased the car in 1990 for $200
In 2006, Tom Shaughnessy of San Clemente, California, purchased the car for $26,912
0202A book has detailed period photographs, news clippings, race results and restoration

This stunning 1952 Ferrari 340 America could very likely be the ultimate barn find. Today, the car is worth millions of dollars, but it was purchased in 2006 for a mere $26,912. If that sounds remarkable, think of the fact that this beauty brought an almost unbelievably low sum of $200 in 1990.

The story of this 340 America—Chassis No. 0202A—is long, winding and incredible. Originally designed by the uber-talented Giovanni Michelotti, lead designer for Alfredo Vignale, who was the founder of Carrozzeria Alfredo Vignale & Co. of Torino, Italy, this Ferrari is finished in period-correct blue with No. 14 livery adorning its flowing coachwork. It is powered by a 4.1L V-12 engine mated to a 4-speed manual transmission. Originally designed for its intended purpose of sports car racing, Andre Simon and Lucien Vincent finished fifth in this car at the 1952 24 hours of Le Mans, with Vincent also competing in the car at Montlhéry in France that same year.

After its European run of racing was complete, the 340 America was exported to the United States via Luigi Chinetti, who is reputed to have sold the car to defense attorney Bill Galvin. As the 1950s wound down, Paul Owens of Texas purchased the car and installed a Chevrolet V-8 engine. Remember, the 340 America was a race car that, like all other race cars, was considered disposable. The goal for a car like this was simply to go fast, not stay true to provenance. After the original Vignale coachwork was damaged in an accident, the Ferrari was fitted with custom open coachwork resembling the 1956 Bangert Manta Ray. This body was reported to have been damaged in a transporting accident, after which the Devin Spider fiberglass body was fitted. Such indignities were not uncommon at the time, but they seem shocking through the lens of history. The Ferrari’s original engine was then sold by a Chicago-area resident. In 1963, Chassis No. 0202A was titled in Salt Lake City before it fell off the radar screen for decades.

Automobile enthusiasts have dreamed for years about coming upon the ultimate barn find; Chassis No. 0202A is that car. Drag racer Mike Sanfilippo purchased the 340 America in 1990 for the pittance of $200. After originally planning to cut up the chassis to make a Hot Wheels-type dragster out of the body, Sanfilippo thought better and the car sat mostly undisturbed for several years. He had no idea that beneath the Devin bodywork lay the bones of a precious Ferrari.

In 2006, automotive restoration expert Tom Shaughnessy of San Clemente, California, purchased what was listed as a vintage Devin sports car on eBay for $26,912. It was Shaughnessy’s plan to restore the Devin to its former glory, but he was in for a big surprise. After taking a closer look at the car, Shaughnessy and Ferrari expert Hilary Rabb soon found out that underneath the fiberglass Devin bodywork lay a genuine competition Ferrari—one of just 475 produced from 1948 to 1974, nearly all of which are known to the Ferrari world.

From there, the discoveries only got better. Thanks to Ferrari expert Marcel Massini, Chassis No. 0202A was verified to be one of only 24 examples of the 340 America built. It also has the provenance of racing in Europe, including the world’s most famous sports car race, the 24 Hours of Le Mans. After this regal history was revealed, it became clear to Shaughnessy that he would need to spend hundreds of thousands dollars to restore the car to its former glory, and the renowned restoration experts at Ferrari Classiche undertook the task of meticulously returning 0202A to its proper form.

The proof of Chassis No. 0202A’s provenance is robust. A book has been created for the car with detailed period photographs, news clippings and race results showing the car at the 1952 24 Hours of Le Mans and racing that same year at Montlhéry in France. Extensive race results from the U.S. during the 1950s are also included, as well as a video of 0202A racing at the Iowa City sports car races in 1955 and extensive pre-restoration photos.

Today the restored 340 America looks magnificent in its French Racing Blue No. 14 racing livery and new Vignale coachwork. Chassis No. 0202A has a correct 4.1L V-12 engine that simply sings, while shifts are accomplished through a 4-speed manual gearbox. The whole package is so graceful that anyone standing near it knows they are in the presence of something special. This lovely car — which comes with a Classiche Red Book with White Stripe, denoting a significant racing Ferrari — has a history unlike few other cars ever to grace the earth.

Arrangements to purchase this vehicle can be made by contacting Dana Mecum directly or through Mecum representative Rob Williams by phone or text at (262) 236-7705 or by email at rwilliams@mecum.com.

The Mecum Gallery is a standalone sales platform that comprises a carefully selected assemblage of investment-grade automobiles available for direct purchase. The roving Mecum Gallery Expositions allow for more private transactions, and the subsequent acquisition process provides prospective buyers a relaxing atmosphere in which to do business. The vehicles contained within the Gallery selections are not among those slated to cross the auction block and are instead offered and sold as private transactions.