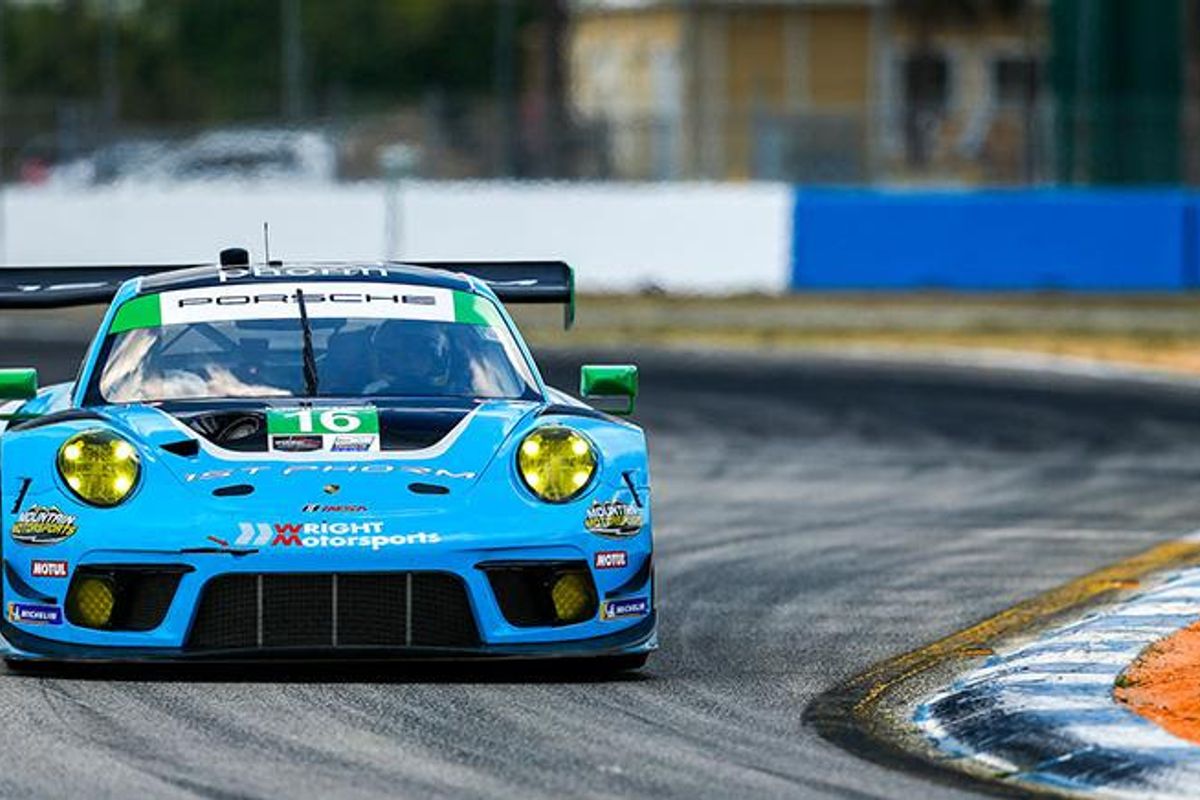 Jack Hawksworth got the points. Tim Zimmermann got the pole, then he didn’t.

The new GT Daytona (GTD) qualifying format in the IMSA WeatherTech SportsCar Championship debuted Friday at Sebring International Raceway, setting the starting grid for Saturday’s Mobil 1 Twelve Hours of Sebring Presented by Advance Auto Parts and awarding points toward the season championship. Under the format changed for 2021, a Silver- or Bronze-rated driver in each car participated in the first 15-minute session to determine the Motul Pole Award and grid position for the race, with the succeeding 15-minute period open for one of each car’s other drivers to battle for points.

Zimmermann, in the No. 19 GRT Grasser Racing Team Lamborghini Huracán GT3, was fastest in the first session following a back-and-forth duel with Jan Heylen. Zimmerman initially won out with a lap of 2 minutes, 0.010 seconds (112.190 mph) around the 3.74-mile, 17-turn Sebring circuit, but the No. 19 failed post-qualifying technical inspection and will start the race from the rear of the field. The car had a Wi-Fi hotspot installed, which is a violation of IMSA’s GTD telemetry regulations.

“That’s a nice surprise,” Heylen said when told he was the pole winner. “Well, you take these things when they come. Unfortunate for the Lambo but we’ll take it anytime. There’s no better way to start the race than from pole position. More than anything, it’s good for the morale, it’s good for everybody in the team. Really looking forward to getting the race started tomorrow.”

Heylen, whose co-drivers are Patrick Long and Trent Hindman, will be joined on the GTD front row by the No. 28 Alegra Motorsports Mercedes-AMG GT3 shared by Daniel Morad, Michael de Quesada and Billy Johnson. Morad will start the race in the No. 28 after driving in the for-position qualifying session.

When the pro drivers slid into the GTD cars for the second segment, Hawksworth quickly took control in the No. 14 Vasser Sullivan Lexus RC F GT3. The 30-year-old Brit jumped to the top of the chart early, setting his best lap of 1:59.247 (112.908 mph) midway through the session and parking the car with five minutes still on the clock.

Hawksworth was pleased to take home the maximum points available for qualifying (35).

“You’ll take every point you can get, so obviously we’re really happy with that,” said Hawksworth. “It’s a tenth of what we get for the race, so it is something. So yeah, happy with the points at the end of the day. We need ‘em. We’ll take it where we can.”

Hawksworth, Aaron Telitz and Kyle Kirkwood will drive the No. 14 Lexus in the race. Telitz will start the race from third on the 13-car GTD grid.

“It’s been a really good weekend for us so far,” Hawksworth said. “We rolled off pretty strong, the car’s been working really well, we had a really good session (in Thursday’s night practice). Just really working to preserve the tires for the duration of the stint.”

As with GTD, the GT Le Mans (GTLM) class qualifying resulted in a repeat pole winner. For the second straight year, Antonio Garcia guided the No. 3 Corvette Racing Chevrolet Corvette C8.R to a track record and pole position in GTLM.

While pleased with the new record, Garcia wasn’t sure it would be possible since the new qualifying format puts GTLM cars in the same segment as the GTD points-qualifying entries.

“It’s always good to be back at Sebring and always special to do qualifying being on lighter (fuel) tanks and going for it,” Garcia said. “I really enjoy that, even though this year with the new rules we are sharing the track with the GTD category. That brings a little more excitement into the qualifying because of the gaps.

“You need to place yourself in the right position not to catch them (at the wrong time). It was very stressful. On my fast lap, I had to pass a (GTD) car into (Turn) 17, but it didn’t seem to disturb me too much. Really happy with that, 1-2 for Corvette Racing. Let’s see if we can keep that for tomorrow’s race.”

The No. 3 wasn’t able to convert the 2020 pole position into victory in November. But coming off a win in the 2021 opener, the Rolex 24 At Daytona, Garcia and co-drivers Jordan Taylor and Nicky Catsburg look to keep the momentum going on Saturday.

“Last year we were in position, as we proved setting the pole and then being up there together fighting with the BMWs and Porsches,” Garcia said. “I think we had the pace at the end, but unfortunately we couldn’t fight for it. Tomorrow, it’s just another race where we just need to focus on that, trying to win this thing. It’s going to be tough, as Sebring has always been.

“We just need to survive out there and when it comes to the last two hours, that’s game on. We have unfinished business from last year’s 12 (Hour) and let’s see if we can take home this one, too.”

The 69th Mobil 1 Twelve Hours of Sebring takes the green flag at 10:10 a.m. ET Saturday. The live telecast begins at 10 a.m. on NBCSN, slides to the NBC Sports App and NBCSports.com at noon and returns to NBCSN from 7 p.m. through the race conclusion. The entire telecast is available on TrackPass on NBC Sports Gold. IMSA Radio coverage airs on IMSA.com, RadioLeMans.com and SiriusXM Radio (Sirius channel 216, XM 392, Internet 992).