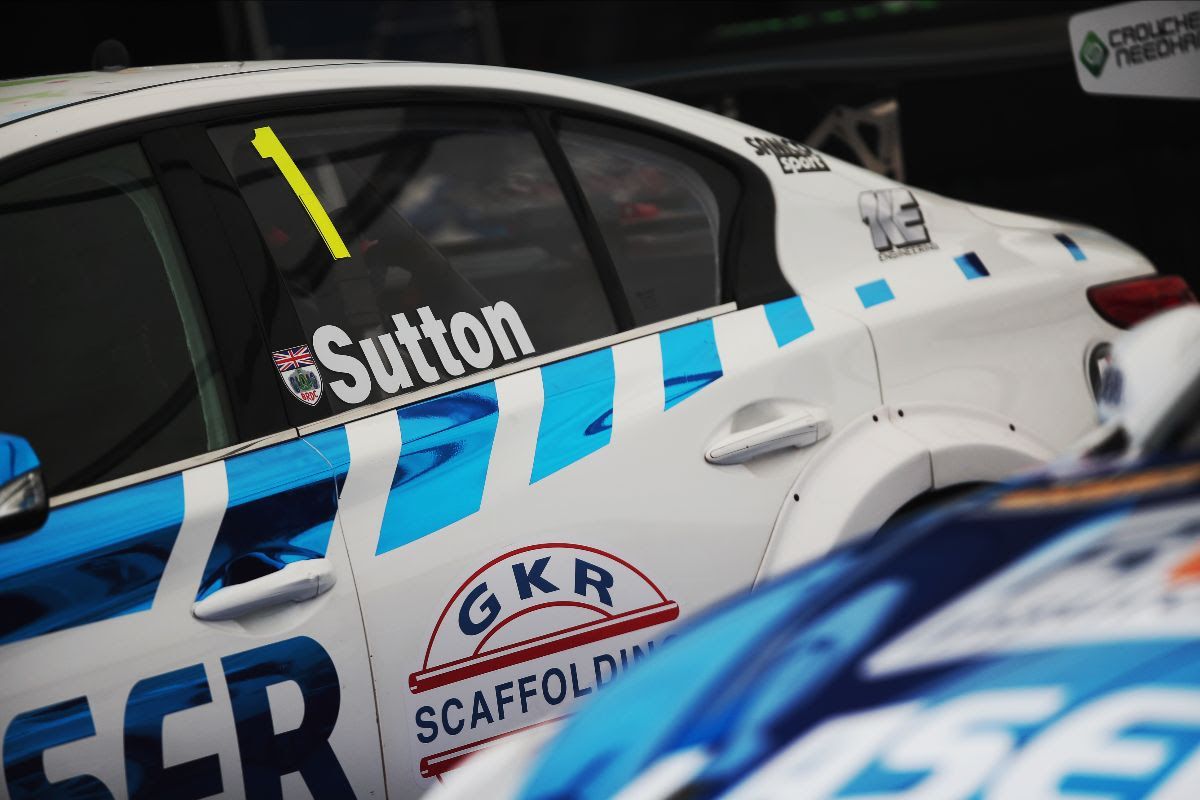 The breathless qualifying session commenced in wet conditions as persistent rain and high winds descended on the high-speed Hampshire venue, but conditions improved slightly as the session progressed towards a grandstand finish.

Tom Ingram (Ginsters EXCELR8 with TradePriceCars.com), Josh Cook (BTC Racing), Jake Hill (MB Motorsport accelerated by Blue Square) and Rory Butcher (Toyota Gazoo Racing UK) all enjoyed spells at the summit of the timesheets as lap times continued to tumble during the 30-minute session, and all would be in the shake-up as many of the contenders switched to Goodyear dry tyres in the closing stages.

It was the Infiniti Q50 of Sutton that scythed into provisional pole position as the chequered flag was prepared, although it still looked as if both Hill's Ford Focus and Butcher's Toyota Corolla may have gone even faster.

Hill's Focus caught up with the Vauxhall Astra of Jason Plato following a good run through Church and Brooklands, before the two cars briefly touched on the exit of the final chicane. The issue was enough to scupper Hill's chances of improvement and he would eventually have to settle for seventh.

Butcher was also flying in the #6 Toyota on his final run, but the Scotsman's P1 hopes were dashed as he pushed too hard and ran wide on his charge to the chequered flag.

Cook was a consistent challenger throughout as he made his way into second in the BTC Racing Honda Civic Type R, whilst Colin Turkington left it extremely late to show his hand by grabbing third.

Bath-born racer Cook regards Thruxton as somewhat of a home track and he clearly enjoys racing at the fastest circuit in the UK, having won here in each of the series' last four visits.

Team BMW's Turkington had struggled to find the ultimate pace for much of the day and was languishing down the order until the four-time champion produced the sort of magic that we've seen many times down the years. He will line up third in tomorrow's curtain-raiser around the 2.36-mile circuit.

Ingram was fourth, ahead of Butcher, whilst Team BMW's Tom Oliphant performed well to claim sixth.

Hill was seventh with series returnee and three-time champion Gordon Shedden close behind. The Halfords Racing with Cataclean star may arguably be slightly frustrated with eighth, having been further up the order during practice, but both team and driver are likely to contend for honours come race day.

Ollie Jackson and Chris Smiley ensured that both pairs of MB Motorsport accelerated by Blue Square and Ginsters EXCELR8 with TradePriceCars.com cars were inside the top ten.

Rounds 1, 2 and 3 of the 2021 Kwik Fit British Touring Car Championship take place at Thruxton tomorrow (9 May) with all of the action being broadcast live and in high definition on ITV4 from 1050.

Ash Sutton said: “Obviously we’ve been thriving in wet conditions all day and the balance was mega then. We were sitting at the top of the times in the wet and then you start hearing people are going out on slicks and you think ‘alright, let’s dig deep’. The front-wheel drive cars can generate a bit more heat quicker than us, so we had to spend a lot more time doing it, but it came good in the end.

“We’ve made a few quite dramatic tweaks from last year and that paid off in the dry because that’s normally our downside. I think I’ll stick to having this number one on the car – it’s given me some good luck.”

Josh Cook said: “I’m a big fan of this circuit – it’s good fun, one of the best circuits we come to, especially in those conditions. I'm gutted to miss out on pole by half a tenth and it’s always got to be Ash, hasn’t it! But well done to him, mega job. It was tricky conditions so I’m happy with that, and I know I’ve got a good race car around here. Just to make it through that session was good but to make it to P2 is just what the guys needed after a hard winter.

“You have to be on the circuit at the right time [to get pole] and it took a bit longer than I expected to get the temperature into the tyres. But at the end of the day we can race from P2. It’s a long season so I just need to try and get some good points tomorrow."

Colin Turkington said: “I saved the best for last! It’s obviously been tricky conditions for everybody today. We’ve been throwing a few different things at it, just trying to learn for qualifying. As usual, we got faster as the day went on and I think I just got onto slick tyres at the right time, a lap earlier would have been even better, but the grip was just improving with every lap so I’m really happy for both my team and BMW to be starting on the second row.

“It takes forever for the front tyres to switch on. The rears are ready after a few laps but you’re just turning into the corner and it’s a big, big push. That’s why you’ve got to get onto them early, try and be aggressive and build the temperature. It’s been a really good start for me."