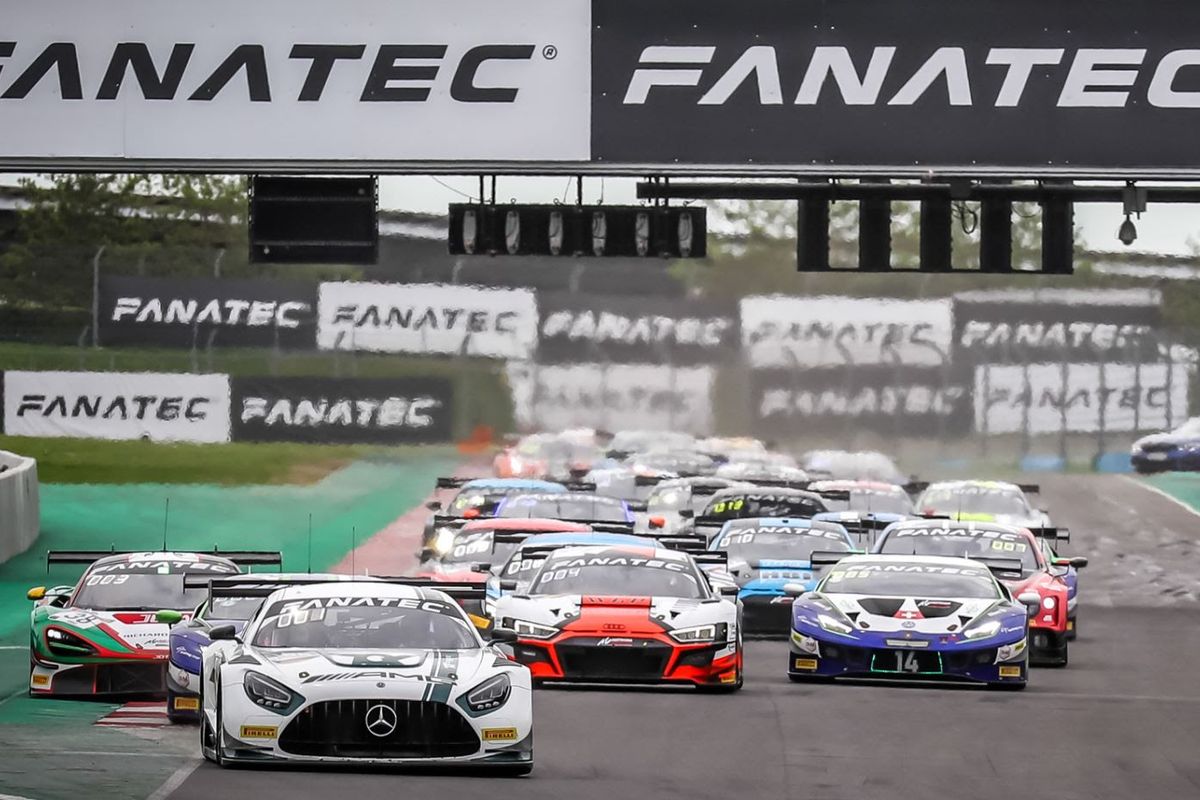 Maro Engel and Luca Stolz launched their bid for the Fanatec GT World Challenge Europe Powered by AWS Sprint Cup title this afternoon by triumphing in the weekend's second 60-minute race at Magny-Cours.

The German duo showed their experience by converting pole into victory, surviving pressure from behind and two safety car periods to earn a maiden overall win for Mercedes-AMG Team Toksport WRT.

Engel maintained his lead at the start, keeping Albert Costa (#163 Emil Frey Racing Lamborghini) and Ben Barnicoat (#38 JOTA McLaren) at bay through the opening sequence of corners. Dries Vanthoor (#32 Team WRT Audi) and Raffaele Marciello (#88 AKKA ASP Mercedes-AMG) were next in the queue, with little to separate the top-five during the early laps.

This group ran in close formation for much of the opening 30 minutes, but there was drama shortly before the pit window opened when Barnicoat made a comfortable pass on a struggling Costa, who spun at the next corner with a suspected left-rear puncture.

This eliminated one of the leading contenders from the race and allowed Engel to build a small cushion at the head of the field. The German elected to stop first, handing over to Stolz just before the half-way mark. Barnicoat, Vanthoor and Marciello all remained on-track, looking to find enough time to jump the Toksport WRT crew in the pits.

JOTA was the next of the leaders to call their car in, but Stolz had done enough to maintain a healthy lead over the #38 McLaren, which now had Oliver Wilkinson at the wheel. This left Vanthoor and Marciello to challenge for the lead, their hopes now resting on their mechanics.

In a battle between two of the fastest crews in the business, AKKA ASP emerged just ahead of Team WRT. The French squad produced the quickest stop of the weekend to send Boguslavskiy out ahead of Weerts, but it was not enough to jump Stolz, who had been lapping quickly since taking over from Engel.

Moments later the race was neutralised behind the safety car after Benjamin Goethe (#30 Team WRT Audi) hit the barriers, bunching up the pack as the final 15 minutes approached. Stolz had the pace to control the restart, but the action behind was intense as Boguslavskiy and Weerts battled over second position.

The Audi driver attempted a move into the Adelaide hairpin, but despite having a good run on Boguslavskiy the Russian was able to defend his position. Another safety car followed, this time the result of contact between the #188 Garage 59 Aston Martin and the #89 AKKA ASP Mercedes-AMG.

The race went green for the final time with just three minutes left on the clock. Stolz was once again able to hold his place at the restart, while Weerts launched another attack into the hairpin. Boguslavskiy closed the door, but the Belgian driver held his nerve and muscled past the Mercedes-AMG.

While there was drama behind Stolz was untroubled on his way to victory. The German triumphed by 3.051s, giving the Toksport WRT squad a maiden overall triumph in just its second season of Fanatec GT World Challenge Europe Powered by AWS competition. Weerts took second to consolidate Team WRT's advantage at the top of the Sprint Cup standings, while Boguslavskiy held off Wilkinson to seal the final spot on the podium.

Fifth overall went to the #89 AKKA ASP Mercedes-AMG, which also captured Silver Cup victory thanks to Konstantin Tereschenko and Jim Pla. The #14 Emil Frey Racing Lamborghini of Alex Fontana led the Silver runners during the opening stint, but a typically fast stop vaulted the AKKA ASP crew into the class lead.

There was still plenty for Tereschenko to do, with Ulysse de Pauw (#107 CMR Bentley) challenging for Silver victory throughout the last stint. The Belgian showed strong pace on his series debut, but when Pro runner Aurélien Panis (#26 Saintéloc Racing Audi) split the two Silver Cup cars Tereschenko was given breathing space. The Russian held on for his maiden series win, while the #107 CMR Bentley and #14 Emil Frey Racing Lamborghini completed the podium.

Pro-Am honours went to Miguel Ramos and Henrique Chaves (#77 Barwell Motorsport Lamborghini) after another competitive battle for class honours. Jonny Adam led the opening stint in the #188 Garage 59 Aston Martin, but by stopping late the Barwell crew was able to capitalise on the first full-course yellow period and assume the class lead.

Ramos then faced pressure from a charging Valentin Pierburg (#20 SPS automotive performance Mercedes-AMG), who closed to within a few tenths of the Portuguese driver during the closing stages. Ramos held on, eventually finishing just 0.370s clear of the SPS car, while yesterday's winner AF Corse completed the Pro-Am podium with its #52 Ferrari.

Today’s race concluded an action-packed weekend at Magny-Cours and signalled the start of the 2021 Sprint Cup campaign. Fanatec GT World Challenge Europe Powered by AWS will be back on-track in three weeks' time, with an Endurance Cup contest taking place at Circuit Paul Ricard on 28–30 May. The annual 1000km event will resume its traditional summer date and early evening start time, ensuring a long-distance race into the sunset.