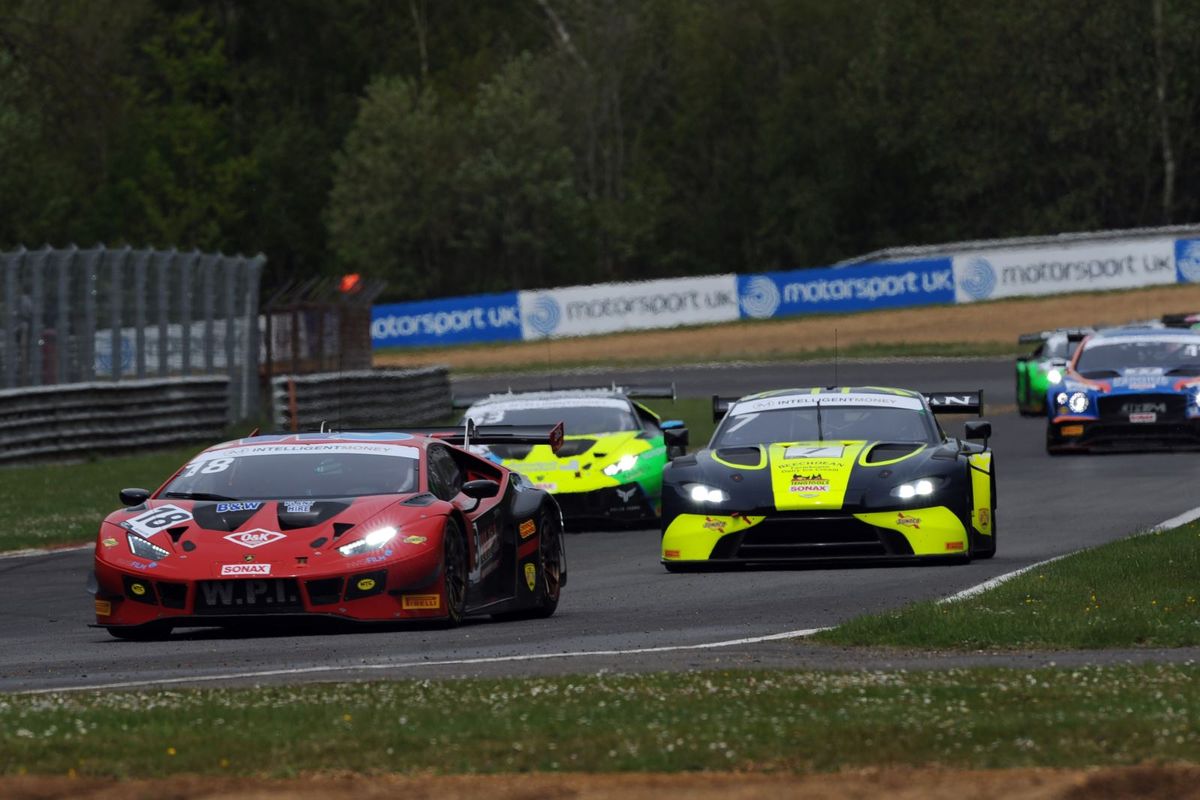 RACE-BY-RACE CONTENDERS SWELL GT3 RANKS AHEAD OF ROUND 2

The longest and most prestigious event on the Intelligent Money British GT Championship calendar takes place this weekend (June 26/27) when a 31-strong entry arrives at Silverstone for three hours of racing.

No pit windows and three driver changes – that’s two more than usual – also leave room for strategy to play a decisive role in the Silverstone 500, which celebrates its 10th anniversary this year. That extra element might explain why six different manufacturers and seven teams have won the race outright over the last decade, and why no driver has claimed more than one victory in the event’s history.

Exactly the same stats apply to GT4 despite Century and BMW winning two of the last three 500s. But Success Penalties for both of its M4s provide an opportunity for another combination to join
Silverstone’s roll of honour.

In short: round two of British GT’s 2021 campaign is absolutely wide open!

GT3: USUAL SUSPECTS VS RACE-BY-RACE QUALITY
Five additional race-by-race entries – none of which are eligible to score points – have resulted in 19 crews gunning for outright victory and the 1932 RAC Trophy that goes with it this weekend. But can any of those interlopers topple the established order?

Well, Pitstop Success Penalties are only served at the final mandatory driver change, which gives Brands Hatch’s podium trio ample opportunity to overcome their impending 20, 15 and 10s handicaps. Equally, an ill-timed Safety Car could wipe out any hard-won advantage.

That’s the double jeopardy facing WPI, Beechdean and Barwell on Sunday. Michael Igoe and 2016’s 500 winner Phil Keen carry the maximum time penalty following their victory in the season opener, while Leo Machitski and Dennis Lind must find an additional 10s. Incredibly, given their respective British GT CVs, Andrew Howard and Jonny Adam still await their first victory in the event after winning the final two-hour edition in 2011.

Sandy Mitchell clinched the crown by triumphing at Silverstone last November but returns there seeking the first points of his and Adam Balon’s campaign. The lack of a Success Penalty will undoubtedly help, while their Barwell squad – masters of making pitstops during early Safety Car periods – is the only team to have won multiple Silverstone 500s.

No driver has stood atop British GT3 and GT4 podiums at Silverstone but that could change if either Balon or Team Parker’s Nick Jones and Scott Malvern prevail. The latter pair’s Porsche made a steady start at Brands but scored a solid sixth place finish after profiting from misfortune elsewhere.

Indeed, Martin Plowman and Kelvin Fletcher were a drive-through penalty shy of fighting for fourth after the latter’s strong opening stint. The second-generation Continental – now entered by the driver crew’s own Paddock Motorsport concern – is yet to win at Silverstone but has often looked well-suited to the high-speed layout.

The same goes for McLaren’s 720S which, unlike its F1 GTR, 12C and 650S forebearers, remains winless at Silverstone. The same chassis with which Balfe came close two years ago now resides at Enduro Motorsport who set second fastest time in Pro qualifying at Brands courtesy of Marcus Clutton.

Speaking of McLaren, no race-by-race crew has won a British GT round outright since Gilles Vannelet and Adrian Quaife-Hobbs triumphed at Silverstone in 2015 aboard Von Ryan Racing’s 650S. But the quality of this weekend’s one-off entries suggests that 53-race streak could end on Sunday.

It’s quicker to list the GT3 championships Brendan Iribe and Ollie Millroy aren’t racing in this year, and it’s that familiarity with their Inception Racing-bannered, Optimum Motorsport-run McLaren that surely makes them the standout race-by-race pairing. The same combination also appeared on course for an overall podium at Silverstone last November before a late issue restricted them to seventh.

That’s one place higher than 2 Seas Motorsport and Martin Kodric who both return with a new manufacturer – Mercedes-AMG – and co-driver: Hunter Abbott.

GT4: CENTURY’S SUCCESS PENALTIES LEAVE DOOR AJAR
Recent form suggests Century and BMW start as favourites for GT4 glory this weekend. But it’s not quite as simple as that…

For starters, both M4s must serve Success Penalties at their final pitstop – Brands winners Will Burns and Gus Burton the maximum 20s, and Chris Salkeld and Andrew Gordon-Colebrooke 15s. What’s more, the early championship leaders – along with every other Silver Cup entry – incur a longer minimum pitstop time and additional ballast.

Those factors combined with Silverstone’s three pitstops have traditionally favoured Pro-Am crews at the 500. Four have tasted overall victory there in the last five years, the only exception being Century’s Jack Mitchell and Aleksander Schjerpen in 2018.

The advantage could therefore lie with Assetto Motorsport, Mark Sansom and Charlie Robertson who were cruelly denied by a puncture at Brands Hatch, while early contact prevented John Ferguson and Scott McKenna from unleashing their Toyota’s true potential. Indeed, the GR Supra claimed pole position and set a new GT4 lap record at Silverstone last November.

McLaren are winless at the 500 since Track Club triumphed in 2017 but have a potential Pro-Am candidate this weekend in Fox Motorsport’s Nick Halstead and Jamie Stanley. Team Rocket RJN’s three Silver Cup-entered 570Ss could also feature, although Brands Hatch podium finishers Jordan Collard and James Kell must first overcome a 10s Success Penalty.

Two handicap-free Silver entries worth watching are Academy’s Ford Mustang and Steller’s Audi R8, both of which were quick at Brands without achieving a standout result. Matt Cowley and Will Moore were on course for the podium – and possibly even victory – before retiring with damage in the opening stint, while a penalty restricted Richard Williams and Sennan Fielding to fifth overall.

There’s also the unknown quantity of Newbridge Motorsport’s Pro-Am entry, which begins its full-season campaign at Silverstone. Matt Topham and Darren Turner will be eager to make an instant impression at an event where a GT4-spec Aston Martin hasn’t won since 2015.

PITSTOP SPECIFICS – THREE-HOUR RACE
There are no pitstop windows in three-hour races – instead, at least three driver changes must take place and no driver may exceed 100 minutes of drive time. Success Penalties must be served during the final mandatory stop. Mandatory pitstops are also subject to minimum times measured from pit-in to pit-out. In GT3 it’s 135s while GT4 is 165s. All GT4 Silver Cup entries must serve an additional 14s during their mandatory driver changes and carry 25kg of ballast.