For its annual event during Arizona Automotive Week, the renowned Gooding & Company conducted its Geared Online Scottsdale Edition for the second consecutive year in a row. Building on last year’s inaugural online-only auction, the company hosted an exclusive viewing of all of the lots in Scottsdale, Arizona, allowing registered bidders and press members the opportunity to experience the robust variety of vehicles in person during the online sale. The company reported a sales total of $6,962,450 for the week, with an 88% sell-through rate from 50 of 57 lots sold and an average price of $139,249 per lot sold.

The online auction presented an especially varied offering for collectors and enthusiasts of all preferences, from classic American cars, to postwar, sporty European offerings. The top sale of the online auction was a rare Touring-bodied 1961 Maserati 5000 GT Coupe, which sold for $924,000. This was followed with the black on black 2005 Ford GT offered from single ownership, which achieved a selling price of $423,500. A late-production 1974 Ferrari Dino 246 GTS finished in Rosso Chiaro over black leather took the third top slot, achieving $374,000. A highly desirable, very early production 1972 Mercedes-Benz 350 SL set a new world auction record, selling for $108,900 and far surpassing its high estimate. Further, the pristine, powerful 2008 Porsche 997 GT2 achieved a strong result, bringing in a total figure of $357,500.

An exceptional, unrestored 1963 Chevrolet Corvette 327/340 Split-Window Coupe performed superbly, yielding a figure of $335,500, the second highest price ever paid for the model at auction. The 2005 Porsche 996 Turbo S Cabriolet, offered from single ownership with limited use, also exceeded its high estimate, selling for $126,500. Additionally, the auction house sold 100% of lots offered from The Richard Donner Collection, presenting 10 classics from the late Hollywood filmmaker’s personal stable. Mr. Donner’s preferred classic to drive, the 1957 Cadillac Eldorado Biarritz Convertible, performed exceptionally well, and sold well above its high estimate for $121,000 after an arduous bidding war.

“Our second consecutive Geared Online Scottsdale Edition sets a strong precedent for the capabilities of our online-only auctions against the backdrop of live and digital events in the industry,” said Gooding & Company President and Founder, David Gooding. “This online auction, coupled with our viewing in Scottsdale, allowed us to maintain a physical presence for our loyal and dedicated clientele who have supported our Arizona sales year after year, while also confirming our strength as an auction house in both the traditional setting and the booming digital space. We are pleased with our strong results and the versatility of our offerings this year, and look forward to a spectacular live auction sale in Amelia Island this March.”

Looking Ahead to Amelia Island
Gooding & Company will offer an exceptional 1959 Porsche 718 RSK (Estimate: $2,500,000 – $3,500,000) from long-term family ownership at its upcoming Amelia Island Auction on Friday, March 4. The meticulously restored, stunning RSK is an exciting example with a proven racing history, and presents an enticing opportunity for the discerning Porsche collector. 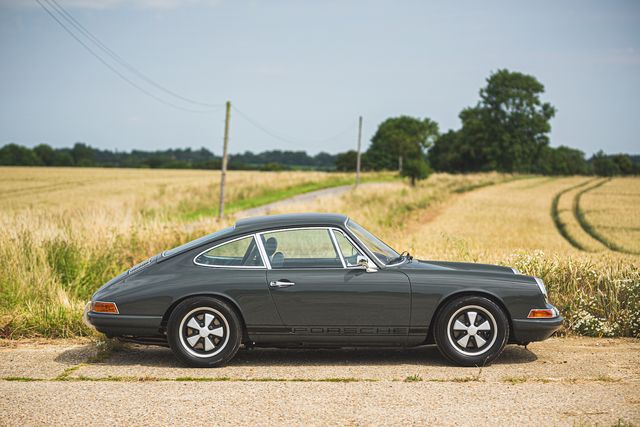