Lucky Khera (Graypaul Birmingham) set the pace throughout the opening weekend of the fourth Ferrari Challenge UK season. He dominated the Trofeo Pirelli with pole positions in both qualifying sessions, taking the top step of the podium in races 1 and 2 at the opening weekend at Oulton Park.

The Coppa Shell series saw the birth and climax of a new rivalry between newcomer John Seale (Carrs Ferrari) and Paul Simmerson (Graypaul Birmingham), with the pair locking horns in both races, resulting in a serious red flag race incident in the final race of the weekend.

Trofeo Pirelli. Having won the series in 2020, eyes were on Khera in the Trofeo Pirelli class coming into the 2022 Ferrari Challenge UK season. Khera quickly demonstrated his pace, setting fastest laps in both qualifying sessions, despite the track still being slightly cold and damp for Qualifying 2 following overnight rain.

Paul Hogarth (Stratstone Manchester) started Race 1 in third place but saw an opportunity on the first corner to move into second, right on Khera’s rear bumper. However, he couldn’t match Khera’s race pace as the Graypaul Birmingham driver commanded the field from flag-to-flag in Race 1 to take the win with a clear 2.8 second lead.

Graham De Zille (Meridien Modena) fought off Faisal Al-Faisal (HR Owen London) to the very end of Race 1, for the final place on the podium. As the first drops of rain started to fall, De Zille crossed the line ahead of Al-Faisal to finish third in his first race in Trofeo Pirelli class, following his promotion from winning the Coppa Shell championship in 2021.

The opening lap of Race 2 was the only time of the weekend that Khera was not at the front of the pack, briefly losing the lead to H. Sikkens (HR Owen London). He regained the lead within the lap, building an impressive 4 second advantage before the race was stopped due to a collision between two Coppa Shell drivers.

The race restarted as a short 10-minute sprint to the finish, with Khera holding off Sikkens throughout. Despite the first-to-the-finish dash, Khera didn’t put a wheel wrong for the entire weekend, his dominance lasting to the line; Sikkens finished just 0.512 seconds behind him, with Hogarth completing the podium.

Coppa Shell. In his first ever qualifying session in the Ferrari Challenge UK series, newcomer John Seale (Carrs Ferrari) set the fastest time to qualify in pole position in the Coppa Shell class. In Race 1, contact between Seale and Paul Simmerson (Graypaul Birmingham) would keep both off the podium. Damage to Seale’s car forced early retirement whilst a penalty for Simmerson would demote him to fourth place, despite being first across the line in Coppa Shell.

Following his first race win, Rogers set about placing his car at the front of the field for Race 2. Rogers’ time of 1:41.477 was just 0.076 ahead of Simmerson but was enough to keep him in pole position, with Seale third.

In Race 2, and with Rogers a clear 8.5 seconds ahead, Simmerson was under pressure from Seale, with a gap of just 0.3 seconds between the two. Seale finally made his move for second place on the very corner that had cost the pair dearly in Race 1, with the two coming out of Lodge Corner side-by-side. Climbing into Deer Leap on the main straight, the narrow track left little room for both drivers. Wheel-to-wheel, Seale moved across into Simmerson, locking the cars together and leaving Simmerson battling to keep all four wheels on the track. Seale’s car hopped, lost traction and forced the pair to swerve right, across the track. Seale collided with the barrier head on, his Ferrari 488 Challenge Evo getting fully airborne, skating along the pit-entrance barrier and coming to rest on the wrong side of the barrier. Astonishingly, Simmerson avoided the barrier, skidding to stop facing out of the pit entrance seemingly undamaged. Fortunately, both drivers were un-hurt in the incident.

The race was red-flagged and stopped for recovery and barrier repair, restarting 45 minutes later as a short 10-minute sprint to the end.

Before the restart, Rogers had a 8.5 second advantage but squandered this when Simmerson squeezed passed to take first place. Simmerson remained in first place in class for the remainder of the race, holding back Rogers who was left fighting with Ambrose for podium positions. Ultimately, Simmerson, Rogers and Ambrose would cross the line with less than a second separating the trio.

Marrs enjoyed drier conditions in Race 2, going on to a repeat first place. Simpson improved on his performance to take second with Tim Walker bring his F355 Challenge in third.

Marrs span out of Race 3, despite the dry, sunny conditions. Vance Kearney took his F355 Challenge to victory ahead of Tim Walker and Chris Butler in his Ferrari 328 GTB. 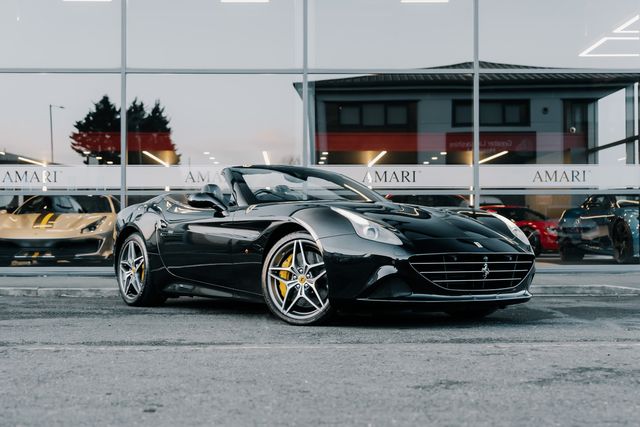