Ferrari is celebrating its 75th Anniversary with an incredible display of Prancing Horse cars at this weekend’s Goodwood Festival of Speed, including 5 models which are making their UK dynamic debut. The brand is also honoured to be represented by many passionate Ferrari collectors who have also entered an outstanding display of classic racing Ferrari models, which range from the first ever Ferrari, the 125S, to the beautiful and highly-successful 250 LM, as well as the iconic 156 Sharknose, as well as the Ferrari 333 SP endurance racer and the Ferrari Challenge 488 evo.

The first of the UK dynamic debuts is the brand’s first V6-hybrid, the 296 GTB which was recently launched to critical acclaim. The 296 GTB has 830cv, from a 2.9-litre mid-rear-mounted V6 which generates 663cv and a hybrid system which can deliver another 167cv to the rear wheels. The 296 GTB on display at the Festival of Speed is represented in a stunning Rossa Corsa with a racing livery in Baby Blue, as part of the optional Assetto Fiorano pack, which includes more aggressive aerodynamics and fixed racing dampers.

The colour scheme of this particular car was inspired by the historic racing livery of Colonel Ronnie Hoare’s Maranello Concessionaires racing team of the 1960s and 1970s, with many cars such as a 250 LM, 275 GTB and 365 GTB4 Daytona having also raced with a similar livery. The car also features an iconic numberplate, “EHF 1”, which was registered on many Ferrari cars in the past, during the days when Maranello Concessionaires also managed the importing of the brand to the UK, before the importing rights were returned to Ferrari SpA in October 2014. Ownership of the EHF 1 numberplate remains with the official Ferrari dealer, Maranello Sales, based at the historic Tower Garage in Egham, and the dealer has very kindly loaned the numberplate to Ferrari North Europe to complete the historic nod to the brand’s history in the UK.

Alongside the 296 GTB in the Supercar Paddock is the Ferrari SF90 Spider, the open-top version of the SF90 Stradale which was launched in 2019 to celebrate the Scuderia Ferrari’s 90th Anniversary. The SF90 Spider features a 3.9-litre V8 engine which produces 780cv, in addition to three electric motors, connected to each of the front wheels and between the engine and gearbox,  which deliver another 220cv, making the combined total power output an astonishing 1000cv. This specification of this particular SF90 Spider was chosen by a journalist from Autocar magazine, which will feature a full review of the car in a forthcoming issue.

Alongside the Ferrari 296 GTB and the Ferrari Roma is the Ferrari 812 Competizione, a limited series car based on the Ferrari 812 Superfast, but with the 6.5-litre V12 tuned to deliver another 30cv for a total power output of 830cv. The 812 Competizione also features more aggressive aerodynamics to the front and rear, with revised front and rear track and suspension settings, including an innovative rear-wheel steering system for quicker turn-in and sharper handling. It also has a soundtrack that will reverberate all the way through the Duke of Richmond’s crenellated flint-faced mansion, so that even the most elegant of ladies in his “Whitehall and the Privy Garden from Richmond House” painting by Canaletto will hear it.

The two other Ferrari cars making their UK dynamic debut are the Ferrari Daytona SP3 and the Ferrari SP38. Both of these cars are outstanding examples of Ferrari’s design language from maestro Flavio Manzoni’s pen, with the Daytona SP3 inspired by classic Endurance racers of the past, such as the 330 P3/4 and the 250 LM. The Daytona SP3 is the third car in Ferrari’s “Icona” range of cars, after the stunning Monza SP1 and Monza SP2 models which have won a raft of awards, including the “Best of the Best” in the Red Dot Design Awards in 2019.

The Ferrari SP38 has been entered by a private client, and it was designed to their own personal specification as part of Ferrari’s One-Off programme in which clients have the unique opportunity to, quite literally, create the Ferrari of their dreams. The Ferrari SP38 is based on the chassis and engine of the Ferrari 488 GTB, but features bespoke bodywork which has been exquisitely crafted in carbon-fibre, but with inspiration for the design coming from the iconic Ferrari F40 for many of the details and visual treatment of surfaces.

The Ferrari range is also represented by the Ferrari Roma, an elegant and stylish 2+2 front-mid-engined V8 coupe that embodies the Italian La Dolce Vita lifestyle. Alongside it sits the Ferrari Monza SP2, another limited series car from the Ferrari Icona range, which takes inspiration from the simple and elegant racing barchettas of Ferrari’s past, without being a retro-pastiche of a particular model.

Ferrari’s display is completed by two other cars which give the 812 Competizione stiff competizione in the “Best Soundtrack Ever” rankings: the Ferrari 599XX and FXX K, both of which represent two of the most exciting and memorable V12 engines ever installed into a car. The XX cars are designed solely for track use, and are not homologated for road or race. This gives the Ferrari engineers completely free reign to test new technologies on the track, the principles of which often make it on to Ferrari’s road cars.

The 75th Anniversary celebrations are also being supported by many passionate Ferraristi who have brought their own classic racing Ferrari cars which represent some of the greatest moments in motor sport history, not just that of the Prancing Horse. 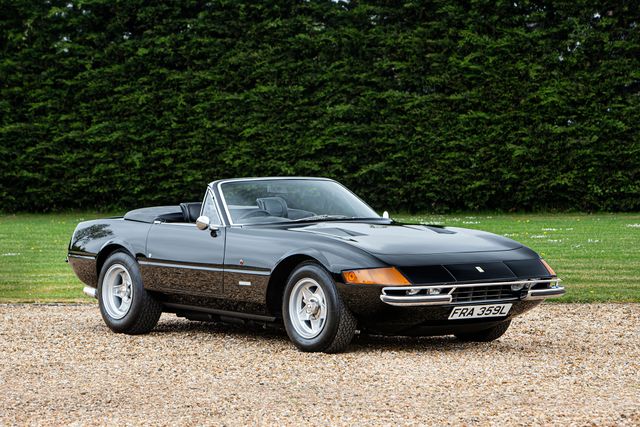