Maserati’s “Car for Kings”; One of Only 34 Examples Built
One-Off Indianapolis Coupe by Allemano with Unique Features
Illustrated in Factory Literature on the 5000 GT Model
Presented in Original Colors and Retains Matching-Numbers Engine per Factory Records on File
Featured in the Maserati 100th Anniversary Exhibit in Modena
Formerly Part of the Renowned John F. Bookout Maserati Collection

The history of the 5000 GT can be traced back to November 1958, when Reza Pahlavi, the Shah of Iran, met with Maserati executives Adolfo Orsi and Alfieri Maserati and outlined his concept for a new supercar. Envisioning an automobile befitting his Imperial Highness, the Shah expressed his desire to have a luxurious gran turismo, like the 3500 GT, equipped with the powerful V-8 engine found in the 450S sports racing car. Naturally, Maserati accepted the Shah’s request and, in so doing, created one of the most extraordinary automobiles of all time.

At the heart of the 5000 GT was a magnificent five-liter engine equipped with exotic dual overhead camshafts, hemispherical combustion chambers, and twin spark ignition. Though the first two examples were equipped with lightly detuned 450S engines, Maserati further developed the powerplant for road use, revising the internal dimensions and replacing the noisy competitionspecification gear drive with more conventional timing chains. Another more notable change was the introduction of Lucas mechanical fuel injection, which replaced Weber carburetors. Although it was more complex, the injection system made the engine more user-friendly and improved throttle response across the entire power band.

The 5000 GT chassis was based on the 3500 GT but specially engineered to cope with the increased power and weight. A ZF manual gearbox and twin-plate clutch delivered power to the rear wheels, while state-of-the-art Girling disc brakes helped slow the car from its 165-plus mph top speed.

Between 1960 and 1965, Maserati built just 34 examples of the 5000 GT, with eight Italian coachbuilders supplying their own distinct designs for the chassis. Priced at a staggering $14,000 when new, the 5000 GT was a direct competitor to Ferrari’s 400 Superamerica and attracted an elite clientele. Famous owners included Fiat boss Gianni Agnelli, American sportsman Briggs Cunningham, industrialist Ferdinando Innocenti, and King Saud of Saudi Arabia.

The 5000 GT presented here, chassis 103.014, was the first of 22 examples to receive elegant coupe coachwork by Carrozzeria Allemano, a Turin-based firm that had worked closely with Maserati since the A6G series of the mid-1950s. The imposing looks of the Allemano Coupe are credited to famous designer Giovanni Michelotti, who was also responsible for Cunningham’s 5000 GT and other classic Maserati models such as the 3500 GT Vignale Spider, Sebring, and Indy.

Unlike the Allemano Coupes that followed, this 5000 GT carried the name “Indianapolis” and possessed unique features, including a different grille design, dashboard arrangement, and unique script on the rear quarter panel. Completed in October 1961, and finished in Grigio Montebello (Montebello Gray) with red leather upholstery, the Indianapolis Coupe was the only car illustrated in Maserati’s official brochure for the 5000 GT model and it also graced the cover of Auto Italiana magazine.

The car’s first owner was William H. Brown of Pittsburgh, Pennsylvania, a millionaire with holdings in steel, banking, and publishing. In August 1961, Mr. Brown collected the Indianapolis Coupe in Modena and drove it throughout Europe. When he returned the 5000 GT to Maserati, he insisted that his car be tested and tuned to ensure it was fully capable of reaching its advertised 168 mph top speed.

On October 19, 1961, Maserati loaded the 5000 GT on the Pia Costa and, when it arrived in the US that November, Mr. Brown collected the car in New York. He then drove the Indianapolis Coupe – presumably at high speed – to his 2,500-acre ranch El Mirado in Sasabe, Arizona. In April 1962, Mr. Brown drove the Maserati to meet his daughter in Beverly Hills, California, and then shipped it to Italy for general servicing.

Mr. Brown sold his 5000 GT in September 1967 and the car’s next recorded owner was Jimmy Castle, a resident of Tucson, Arizona. During his ownership, the Maserati appeared in a Tucson Daily Citizen article titled “The Most Aristocratic Autos in Tucson.” By 1975, the Indianapolis Coupe had come into the care of Maserati enthusiast Richard Kreischer, who rescued the car after it had been left to languish in the Arizona sun.

In the late 1980s, the 5000 GT was sold to Oliver Kuttner of Charlottesville, Virginia, and, by March 1988, was being advertised by English dealer Griffon Motor Cars. From there, the Maserati joined Lord Charles Brocket’s extensive classic car collection.

Randy Simon acquired the 5000 GT in the mid-1990s and eventually managed to locate the car’s original engine, which had been removed during Lord Brocket’s ownership, and reunite it with the car. In 1996, the well-known collector John F. Bookout purchased 103.014 from Mr. Simon, adding it to his exceptional stable of coachbuilt Maseratis.

In 2001, Mr. Bookout shipped the 5000 GT to Italy, where it was completely dismantled for restoration and the coachwork stripped to bare metal. From there, the body was carefully prepared and refinished in its original color, using the paint formula supplied by Mr. Cozza at the Maserati factory. The upholstery was re-trimmed in red leather and custom carpeting, specially ordered to match samples of the original materials removed from the car. Completed in May 2006, the restored Indianapolis Coupe was unveiled at the Keels & Wheels Concours d’Elegance in Houston where it was displayed alongside one of its relatives, a Frua-bodied 5000 GT. More recently, the Indianapolis Coupe represented the 5000 GT line in the prestigious exhibition, Maserati 100 – A Century of Pure Italian Luxury Sports Cars held at Museo Casa Enzo Ferrari in Modena, between June 2014 and January 2015.

The current caretaker acquired the Maserati at Gooding & Company’s Pebble Beach Auctions in August 2016, and it has since resided in a private collection comprised of the finest European sports and GT cars. During this time, the car has not been exhibited, providing its next owner the opportunity to return this important car to the concours circuit.

Though it was first introduced over 55 years ago, the 5000 GT is still widely regarded as the ultimate Maserati road car. A true “car for kings,” built in extremely limited numbers during the marque’s postwar zenith, it offered exotic Italian style and outright performance never before seen in a road-going automobile.

A fantastic expression of power and exclusivity, the Indianapolis Coupe exudes the individual character and artistry of a bygone era. Custom tailored by Carrozzeria Allemano and delivered new to an important American customer, 103.014 is not only a striking singular creation, but it also possesses a rich, well-documented provenance and a faithfully executed restoration.

Those with an appreciation for the prestige, glamour, and sophistication embodied by a one-of-a-kind, coachbuilt Maserati should recognize the appearance of this exceptional 5000 GT as an opportunity not to be missed. 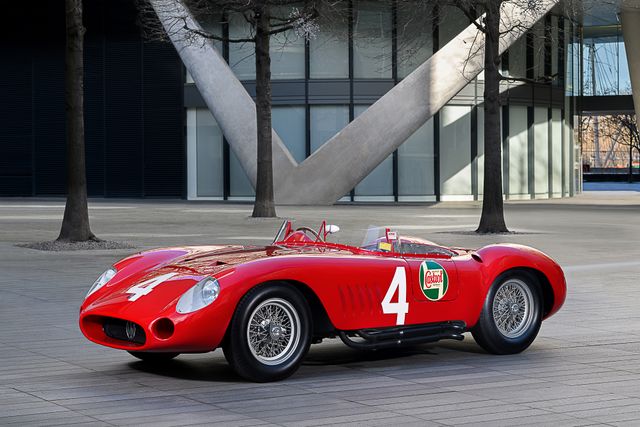