As the road-going development of the racing cars that returned Mercedes-Benz to the top echelons of international motor sports during the early 1950s, the 300 SL Gullwing coupe remains a landmark of design and engineering prowess. Its importance to the automotive landscape and to the Mercedes-Benz company cannot be overstated.

This exceptional Gullwing appears to have been sold new on the West Coast of the US, with Mr. C. Cramer appearing on the car’s factory build record. It is possible that Mr. Cramer never took delivery, or he kept the car only for a short time, as it was soon acquired by an attorney by the name of Schnabel, based in Pacific Palisades, California. In 1959, the 300 SL was acquired by Marshall Tollefson, who was stationed in San Diego, California, with the US Navy. Mr. Tollefson was looking for a suitable upgrade to his Austin-Healey and ruled out Ferrari and Maserati due to lack of factory support in his native Minnesota. Mercedes-Benz’s association with Studebaker, and their nationwide service program, was the key to his settling on a 300 SL at that time. The young pilot asked a salesman at Hollywood Mercedes-Benz if he knew of any secondhand Gullwings for sale, and was initially rebuffed due to his age, but when he returned the following week, he was given Mr. Schnabel’s name, with whom he quickly struck a deal and purchased the then-32,000-mile Gullwing, painted in Elfenbein (DB 608, Ivory) over red.

Following his time in the service, the car became Mr. Tollefson’s fair-weather daily driver around his hometown of Prior Lake, Minnesota, for at least the next two decades, accumulating some 111,000 miles on its odometer. Mr. Tollefson later recounted his joyous years with the car, reporting that a total of four Gullwings were known in his state, and that the owners were acquainted with each other. In about 1980, Mr. Tollefson damaged the reverse gear’s idler pinion, which required replacement. It is not known if the correct and unnumbered gearbox case fitted to the Gullwing is original to the car.

After a few years of storage, Mr. Tollefson began a body-off restoration on his 300 SL. As the project progressed, he was daunted by the costs he was facing to finish the job, and he sold the disassembled car in 1989, via John Olson, to restorer Bruce Kelly in Minneapolis. Kelly and his shop staff at Lake Country Classics completed the restoration to a high standard, as documented by numerous photographs. In 1991, Ingbert Jaus purchased the Gullwing and exported it to his native Germany. The Gullwing was enjoyed with regularity and maintained by two Stuttgart-area specialists, according to Mr. Jaus. Engine-related work was performed by Oldie Service Team, and chassis, body, or electrical work was carried out by his brother’s organization, The Classic Car Center. The Gullwing made its post-restoration debut at the Ludwigsburg Concours d’Elegance, where it was awarded a First Place trophy – a proud testament to its presentation.

In 2001, Mr. Jaus reimported the car to the US to be sold, and it was briefly owned by Symbolic Motorcars of San Diego, California, before being acquired by prolific collector John O’Quinn of Houston, Texas, in 2003, who kept the 300 SL in his large collection for the next six years.

In 2009, the Gullwing joined a private collection in the US where it was driven and enjoyed, and was consistently refined and improved. A second set of seat cushions were crafted in proper Mercedes-Benz red tartan, in addition to its red leather cushions. In early 2021, the Gullwing’s paint was refinished, and its combination of colors is truly stunning.

After acquiring the car and bringing it to Europe in 2021, the current owner has had a major service performed on the car, as detailed in accompanying invoices, including a fluid flush, cylinder head work, renewal of the braking system, new tires, in addition to tuning and necessary adjustments. The Gullwing is offered with a proper tool roll, and a pristine set of original Karl Baisch pigskin luggage, as well as manuals and bellypans. Cherished and preserved throughout many decades, this outstanding 300 SL Gullwing is the perfect choice for an automobile known for its purity of driving enjoyment and unparalleled presence and style. 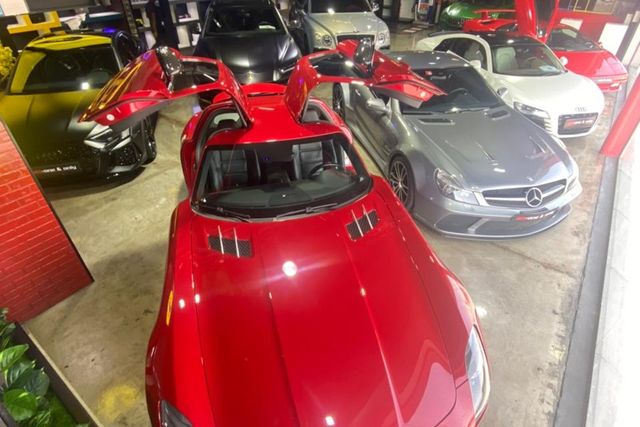