.
The Ferrari Vision Gran Turismo, Maranello’s first concept car designed specifically for the Gran Turismo® videogame series, has been unveiled
The Vision Gran Turismo is a futuristic single-seater sporting a more extreme version of the V6 also adopted on the recently-launched Ferrari 499P
Three electric motors, extreme aerodynamics and advanced dynamic controls for unmatched performance
An aggressive, futuristic design hides references to Ferrari’s legendary Sports Prototypes of the 1960s and 70s
The full-scale design study will be displayed in the Ferrari Museum in Maranello from 15 December 2022 to March 2023

The Ferrari Vision Gran Turismo, a closed-wheel single-seater, is the first Ferrari concept car created specifically for the virtual motor sport world. The car’s design has its roots firmly in Maranello’s unparalleled racing tradition, with the number 75 on its flanks reflecting that noble heritage. The launch of the Ferrari Vision Gran Turismo in fact brings the 75th anniversary celebrations of when the marque’s first-ever racing car, the 125 S, exited the iconic factory gates in 1947, to an official close.

To mark that occasion, this model not only signifies an important step for Ferrari in the virtual environment, where it will inspire new generations of passionate drivers and enthusiasts, but also redefines the company’s stylistic language. It represents a futuristic design manifesto for Ferrari’s road and racing cars, embodying the maximum expression of formal beauty and innovation, and providing a stimulus for both the engineers and drivers (real and virtual) of tomorrow.

The Ferrari Vision Gran Turismo’s design was penned by the Ferrari Centro Stile under the direction of Flavio Manzoni, and takes its inspiration directly from legendary 1960s and 70s’ Ferrari Sports Prototypes, which enjoyed huge success in endurance races such as the 24 Hours of Le Mans (won by the Prancing Horse a total of nine times), and the 24 Hours of Daytona. Featuring dramatic proportions and futuristic lines, the car succeeds in its stylistic mission by effortlessly embodying the DNA of masterpieces such as the 330 P3 and 512 S, simultaneously paying homage to the Prancing Horse’s glorious racing history and affording a tantalising glimpse of the future evolution of closed-wheel racing cars.

The design of the Ferrari Vision Gran Turismo was conceived around the idea of a speed form with very geometric, sharp, angular lines that nevertheless underlie a very organic shape. This contrast has a disruptive effect, as the plasticity of the external and internal surfaces binds with the geometric precision of the lines, creating a car with an immediately recognisable character, the architecture of which centres around an advanced aerodynamic concept based on two imposing side channels. This solution has been patented by Ferrari and directs the airflow from the front underbody, around the cockpit and over the striking side pods. This solution generates extremely efficient aerodynamic downforce thanks to the variation in momentum and the suction created by the central part of the underbody. The rear aerodynamics were developed using concepts inspired by the Ferrari 499P, particularly in terms of the diffuser and the rear biplane wing. Lastly, the front S-Duct and the integrated air vents on the wheelarches further boost aerodynamic efficiency and high-speed stability.

The Ferrari Vision Gran Turismo sports the same 120-degree 3-litre turbo V6 architecture adopted on the 296 GTB, 296 GTS and 296 GT3 that also powers the new 499P. However, in this installation, there were no technical regulation constraints to comply with, so it was further honed to unleash genuinely extreme performance. In this particular configuration, the engine is tuned to deliver a massive 1030 cv at 9000 rpm, with an additional 240 kW (326 cv) available from three electric motors, one on the rear axle and one on each of the front wheels. Ferrari worked with Gran Turismo to ensure that the exhilarating engine sound of this innovative powertrain is faithfully reproduced to give SIM racers an even more realistic racing experience.

The bodyshell of the Ferrari Vision Gran Turismo appears as if suspended over the flat, carbon-fibre underbody which incorporates all the car’s technical components, thus giving purity to the shape. The chassis is designed to emphasise the car's lateral dynamics in on-the-limit handling. The powertrain layout guarantees an optimal front-rear weight balance and an extremely low centre of gravity to the benefit of the AWD. The elasto-kinematic suspension set-up was developed around the performance characteristics of the tyres used in Gran Turismo™ together with the car’s aerodynamic balance, the aim being to guarantee superlative performance on both torturously winding city circuits and traditional endurance race tracks.

The suspension is designed to maintain the tyre contact patch to ensure maximum traction, thereby allowing the Ferrari Vision Gran Turismo to deliver 1100 Nm of rear torque from the combined ICE and MGU-K to the road. The result? Peerless performance. Cutting-edge electronic vehicle controls endow the car with the unrivalled cornering agility and handling balance that Ferrari’s road and racing cars have long been renowned for. The in-game experience is thus designed to faithfully replicate Ferrari’s in-car driving thrills, conveying an accurate feeling of the limits achievable and enhancing the car’s performance.

The car also boasts hybrid technology that benefits from the unique expertise in electric boost and energy recovery strategies Ferrari has developed in Formula 1. Constantly balancing the state of charge of the battery allows the driver to make full use of the combined power available from the ICE and electric motors, so that maximum performance is available both during qualifying laps as well as over consecutive racing laps.

The interior design is an extension of the exterior, with a purist, minimalist approach delivering optimal functionality and driver ergonomics. The dashboard lines are clean and spare and, just like the see-through engine cover framing the hybrid V6 powertrain, incorporate transparent high-tech materials to reveal the mechanical components of the sophisticated modern steering wheel. The HMI is designed for immediacy and ease of use so that the driver can always concentrate fully on the road ahead.

Unveiled during the Gran Turismo World Finals in Monte-Carlo, the Ferrari Vision Gran Turismo will become available to all users of GT7 from the 23rd of December 2022. However, starting right after the unveiling on the 27th of November at 19:00 CET, GT7 users will be able to take part in a viewers’ campaign quiz through the game, with the winning participant receiving the Ferrari Vision Gran Turismo as a gift on the 15th of December. On the same date, the full-scale design study will make its first public appearance at the Ferrari Museum in Maranello, where it will be displayed alongside the current exhibition dedicated to the marque’s exclusive one-off models until March 2023. 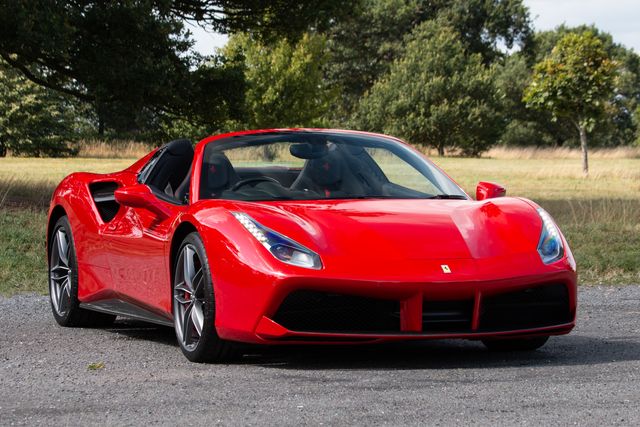