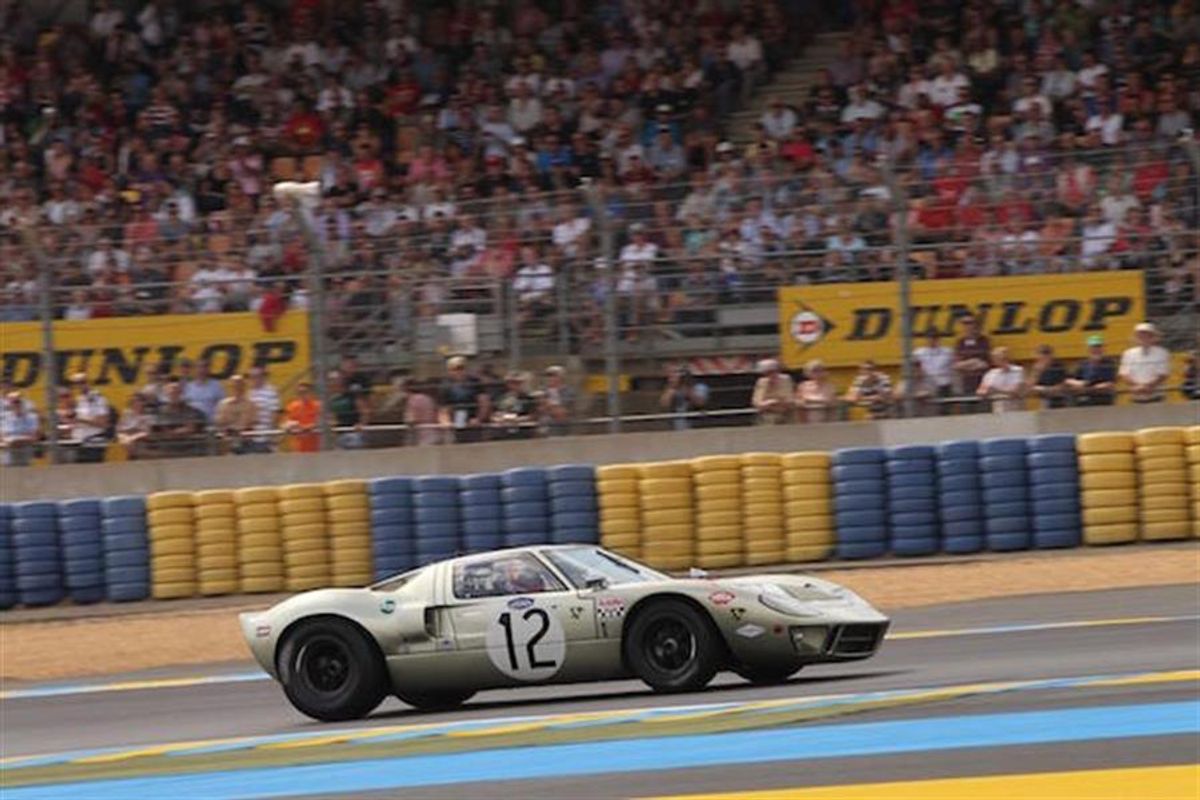 A day after making the headlines with their return to Le Mans, Ford grabbed the limelight in the Le Mans Legend as well, as a pair of GT40s that competed at La Sarthe in the 1960s finished one-two.

Bernard Thuner, a veteran of three Le Mans 24 Hours races, was dominant in Claude Nahum’s GT40, Nahum having bowed out of sharing the car in the race subsequent to a hairy spin in Thursday’s qualifying. The 1994 Swiss Touring Car Champion only lost the lead temporarily during the pitstop phase, while Andrew Smith and James Cottingham ensured there were two Fords on the podium.

There could have been even more Blue Oval representation on the rostrum, but for a mechanical problem late in the race for Diogo Ferrao/Martin Stretton’s front row-starting machine.

The GT40s were a new and very welcome addition to the biannual support race, after the regulations were extended to cover iconic machinery from 1949-1968, allowing the more modern Fords to take part.

Thuner streaked away from pole in his Ford, which competed in the 24-hour race in 1968 in the hands of Mike Salmon and Eric Lidell, while Ferrao maintained a watching brief.

Further back there was drama for Smith as he spun at Indianapolis and lost a host of places. Also losing out at the start was Richard Meins’ GT40 as Sylvain Stepak’s Alpine A220 got the jump off the line.

It was a troublesome start for Barrie Williams in the Mini Marcos GT as he spun the bright yellow machine into the Indianapolis gravel. By the time he was given a helping hand out, he had dropped to the very rear of the field.

Over the next few laps, the GT40s streaked away at the front while Smith, in the ex-Scuderia Bear GT40 which was punted out of the ’66 Le Mans 24 Hours during qualifying, quickly made up for his error, surging up the order to claim second place at the second Mulsanne chicane on the penultimate lap. Smith commented: “Driving that thing down the Mulsanne Straight was just phenomenal.”

While Smith made up places, the Alpine dropped back with Stepak and Jean Luc Blanchemain eventually falling to seventh. This beautiful machine is a fascinating piece of motorsport history in more ways than one, having pioneered slick tyres when it went to Le Mans in 1968 with Michelin.

The safety car was deployed late in the race after a significant amount of oil was deposited on the track. When the pace car peeled into the pits, the cars crossed the line to take the chequered flag, ensuring that Thuner triumphed over the 61-car grid.

Ludovic Caron in a Shelby Cobra made a cheeky late lunge out of the final corner to steal second across the line, but the Stewards later relegated him back to third as safety car conditions still prevailed, giving a GT40 one-two. Caron claimed Class 4 honours for larger-engined 1960-68 cars, and third overall was still a good result after his sixth place grid slot.

There were other GT40s in the top six as well, as Meins claimed fifth and Philip Walker/Miles Griffiths’ machine took sixth, while an AC Cobra was fourth in the hands of David Hart – up from ninth at the start.

There were dominant victors in all of the other classes, with the majority of the winners maintaining the lead throughout the race.

Class 1 for over 2000cc 1949-54 cars was won by John Young in JD Classics’ bronze Jaguar C-type, while Class 2 for similarly-engined slightly newer machinery was topped by Clive Joy and Jarrah Venables’ pale blue D-type; a car with a versatile motorsport career, having been raced, hillclimbed and even rallied.

A total of 14 cars entered had originally competed at Le Mans 24 Hour enduros, with other cars that had raced around the legendary French track in period including another GT40 from 1966, which Marc Doncieux raced to 11th place in the Legend event.

But the immense heat of the early Saturday sunshine took its toll on many of the cars, including some of the Le Mans veterans. Holly Mason-Franchitti/Charles Knill-Jones’ Alfa Romeo TZ1 from 1964 was among those to suffer and didn’t complete the first lap.

A number of the drivers were also veterans of the ‘world’s greatest motor race’ with former British Touring Car Champion Steve Soper making his first appearance at Le Mans in over 15 years at the wheel of a Jaguar E-type semi-lightweight. He eventually finished the race in tenth.

The enormity and eclectic variety of Motor Racing Legends’ Le Mans Legend grid made for a fascinating curtain-raiser to the main Le Mans race, with the sight of so many iconic cars raced flat out being one to marvel at.