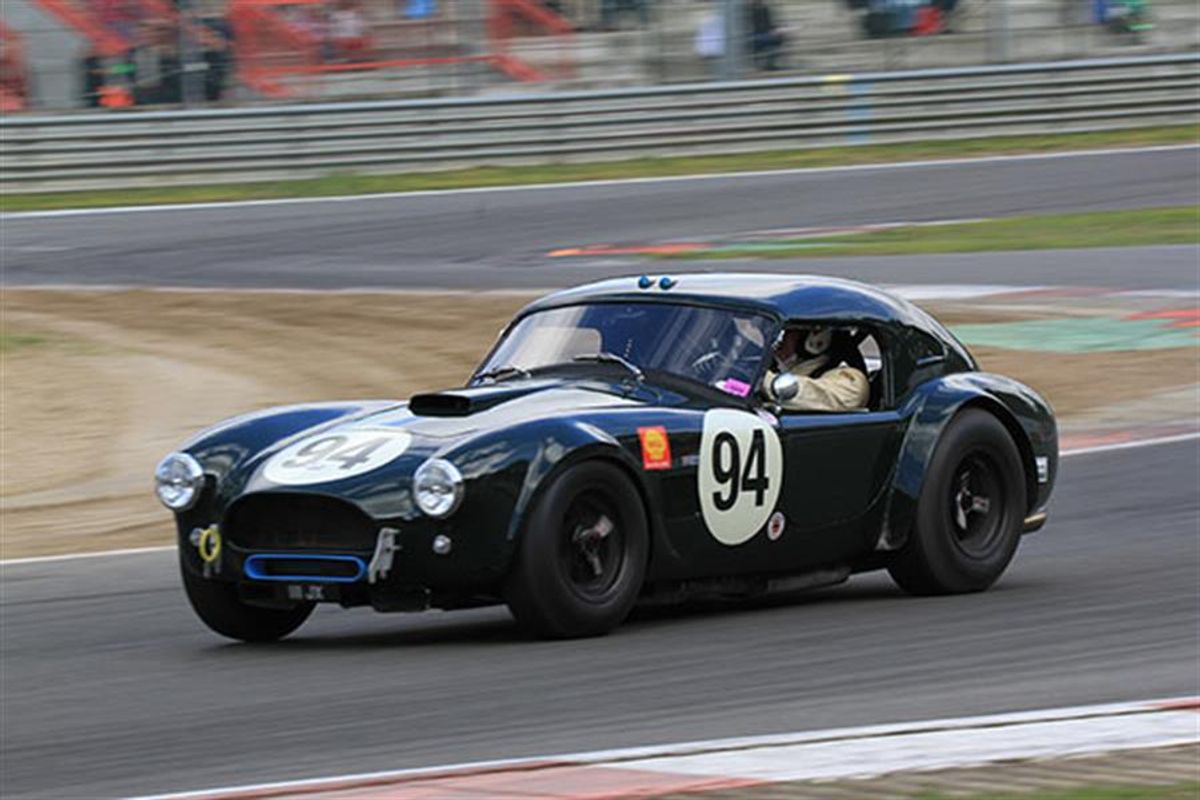 Michael Gans and Andy Wolfe ran home to an easy win in the Stena Line Gentlemen Drivers race at Zolder, their AC Cobra ahead of Leo Voyazides and Simon Hadfield (Shelby Cobra Daytona Coupé), who lost any chance of victory when they were penalised for a driver change seven seconds ahead of the allowed pit window.At the start, Leo Voyazides hung on to the lead despite a half-attempt from Gans into the first corner. Within the space of a lap, however, the lead battle had turned into a battle for third, as both Jon Minshaw (Jaguar E-type) and David Hart (AC Cobra) got past the leading pair. Keen on establishing an early lead before handing over to Hans Hugenholtz, Hart then took care of Minshaw into the first turn of the second lap.The Dutchman quickly established a five-second second lead over Minshaw, before the E-type headed into the pits on lap 10, forced out by a terminal brake issue. This left Voyazides and Gans to take up the chase. On lap 12, though, it all went wrong when the two made contact at the end of the pit straight just after Gans had passed Voyazides for second after Leo made a small error.“Either he braked too early or I braked too late,” said Leo, surveying dented cars. Both were able to continue, but Hart now held a 14-second lead over Gans and a further 14-second lead over Voyazides.A minute back, Peter Dod and Jamie Boot were having their own race in their TVR Griffiths, Dod passing Boot on lap six. However, Dod was forced into an unscheduled pit stop on lap 19, handing the place back to Boot. Meanwhile, both CLP-class Elans of Graham Wilson and Mark Martin (after a pit lane start) were charging through the field to establish themselves in sixth and seventh, while Keith Ahlers’ Morgan maintained a healthy lead over Dutchman Robert-Jan ’t Hoen’s Healey in the C2 class. Mark Ashworth was up to ninth after a slow start, but had no competition in C1 after the rival Malcolm Paul/Rick Bourne Grantura had been forced into a lengthy pit stop after the opening lap.On lap 21, Voyazides was the first of the leaders to pit, allowing Simon Hadfield the maximum amount of time needed to make up a 37-second gap to the leading Hart/Hugenholtz Cobra. Gans handed over to Andy Wolfe one lap later, but Hart stayed out as long as he could, pitting at the end of lap 24. Hugenholtz now in the car, the DHG Racing Cobra held a 4-second lead over Wolfe, with Hadfield – on a charge – 16 seconds behind.Wolfe, equally flying in the black Cobra, took the lead as early as lap 26 while Hadfield set a new fastest lap of the race to close the gap to Hugenholtz to nine seconds. Boot was still fourth, a lap down, while Nigel Greensall (now in Wilson’s Elan) was extending his cushion over Andrew Haddon who had taken over Mark Martin’s Elan. The Peter Dod/Nathan Dod Griffith was next up, followed by the class-leading Keith Ahlers/Billy Bellinger Morgan Plus 4 SLR and another class-leading car, Mark Ashworth’s TVR Grantura.Then came the call that Voyazides had in fact pitted too soon: the Shelby Cobra Daytona Coupé was given a 15-second stop-and-go penalty. Hadfield got ahead of Hugenholtz first before coming in on lap 30 to serve his penalty, dropping back to fourth in the process. With 25 minutes still on the clock, Wolfe looked solid at the front, having extended his lead over Hugenholtz to 27 seconds.In C1, fortunes took a turn when Mark Ashworth stopped out on the circuit on lap 30, handing the class lead back to the Paul/Bourne Grantura that was troubled early on. This allowed the yellow-coloured Healey pair of Dutchmen Robert-Jan ’t Hoen and Cor Visser into the top 10, while on lap 38, Nigel Greensall took fourth place overall from Jamie Boot.Despite Hadfield setting numerous fastest laps, the Gans/Wolfe Cobra was safe in the lead, despite a brief off at turn one, while Hadfield blasted back up into second place by the end.Third was the DHG Cobra of Hart/Hugenholtz, followed by the class-winning Lotus Elan 26R of Graham Wilson/Nigel Greensall. Jamie Boot (TVR Griffith) was fifth, ahead of Martin/Haddon (Lotus Elan). Keith Ahlers/Billy Bellinger (Morgan 4 Plus SLR) beat Robert-Jan ’t Hoen (Austin Healey 3000) to C2 class honours.Race winner Michael Gans said: “ I was running at a good pace early on and I felt comfortable. I didn’t want to get tangled up and I was trying to keep out of trouble, but then Leo arrived! No harm done!”Andy Wolfe’s stint was more difficult than it looked: “I was trying to make sure I knew the situation with the others but where our pit board was at the end of the pits straight, I could only read two lines! On one lap, I tried to read a bit more, missed my braking point and went off!”The troubled entries from James Hagan/Ron Maydon (Ginetta G4R), Cor Visser (Austin Healey 3000), David Hathaway (Triumph TR4A), Dod/Dod (TVR Griffith) and Paul/Bourne (TVR Grantura) rounded out the finishers, the latter taking the win in C1. Both E-types failed to finish.