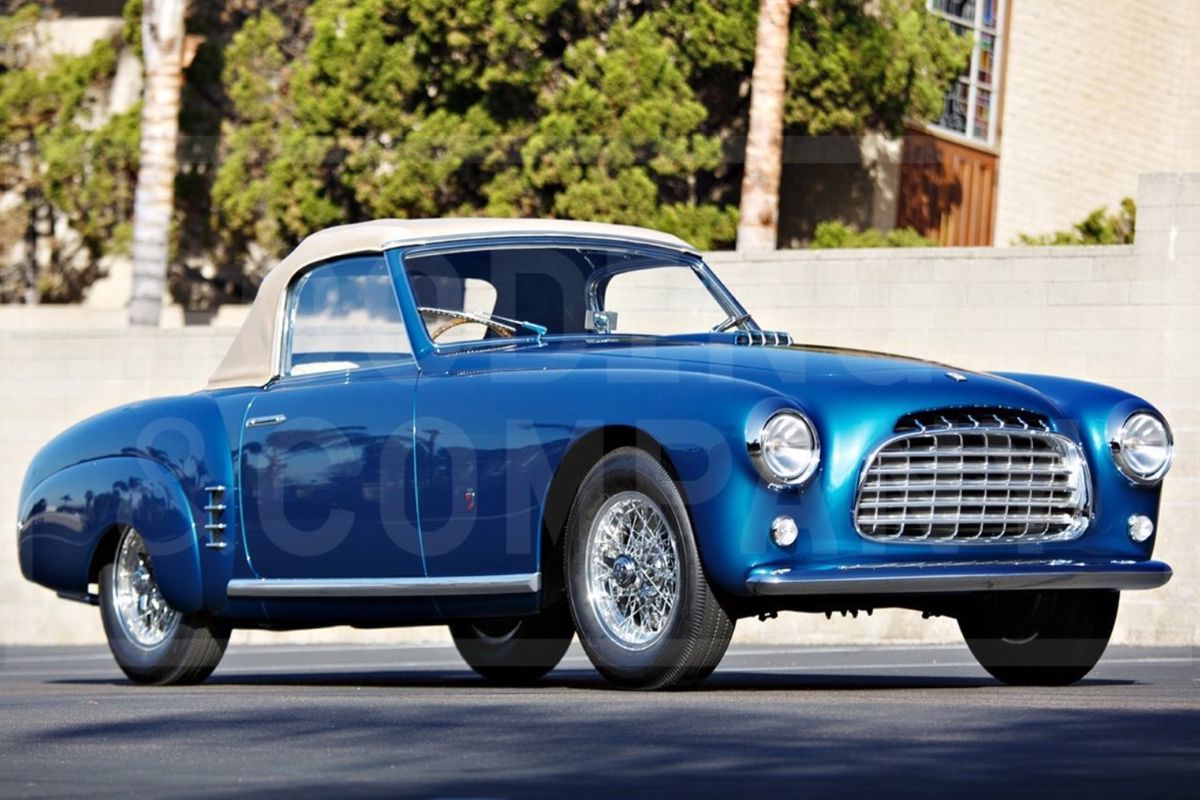 THIS CAR
Introduced in 1951, the Ferrari 212 was the final evolution of the original tipo 166 model and the direct replacement for the updated 195 S. Sharing roughly the same chassis and suspension features of its predecessors, the 212 featured a 2.6-liter variation of Ferrari’s magnificent V-12 engine. As a result of its larger displacement, power output increased considerably, and the 212 offered impressive performance for the period. Toward the end of production, the 212 Inter gained a new “EU” suffix – foretelling its successor, the 250 Europa. These late-production 212 Europas incorporated many important factory updates, including three Weber 36 DCF5 carburetors.

Several coachbuilders were called upon to fashion bodies for the Ferrari 212, resulting in a remarkable variety of styles that were often tailored to the demands of a specific customer. Many of Italy’s great design houses – including Pinin Farina, Touring, Vignale, and Ghia – used the versatile chassis to showcase their unique approach to Ferrari styling.

Upon its completion in December 1951, this Ferrari 212 chassis was shipped to Carrozzeria Ghia in Torino, a distinguished firm that produced an extremely limited number of bodies for Ferrari during the early 1950s. Unlike Torinese rivals Pinin Farina and Vignale, which produced bodies for both road and racing Ferraris, Carrozzeria Ghia focused on the most exclusive road-going models. It succeeded in producing high-quality, upscale coachwork characterized by luxurious interior appointments, marvelous handcrafted details, and refined, understated styling.

The coachwork that Ghia executed is one of two similar cabriolet bodies built for Ferrari’s 212 chassis. In typical Ghia fashion, each cabriolet body was unique, easily distinguished by its color scheme and fine detailing. However, both cars shared the same compact proportions, disappearing soft top, and skirted rear fenders. The overall result is quite attractive and consistent with Ghia designs of the period, possessing an undeniable American influence with an elaborate grille and decorative chrome flashes on the tail.

The new Ferrari Cabriolet was unveiled on the Ghia stand at the Geneva Auto Show, held between March 20 and 30, 1952. After its debut in Switzerland, where it was displayed alongside two other Ghia-bodied Ferraris, the 212 was shown at the Torino Motor Show, displayed at Parco Valentino from April 23 to May 5. Once its show duties were complete, the Ferrari returned to the Maranello factory and was prepared for delivery to its first owner – an important Italian customer named Gianni Mazzocchi.

In 1929, Sig. Mazzocchi founded Editoriale Domus S.p.A., a publishing company that initially specialized in architecture and furniture magazines, and later created many new publications including L’Europeo, Il Mondo, and Stile Industria. A lifelong car enthusiast, Sig. Mazzocchi believed that the automobile was a powerful symbol of freedom and personal independence in fledgling postwar Italy; in 1956 he founded Quattroruote, which quickly became the nation’s most popular and influential automotive publication.

Sig. Mazzocchi apparently did not keep his Ghia-bodied 212 Europa Cabriolet for long. By 1953, it had been bought back by Ferrari and sold to a new owner, Paul Arnold of Le Cannet, France. Later that year, the Ferrari was exported to the US, though little is known of the car’s earliest history in America, except that a new top was made for it by Richmond Hill Auto Top of New York in September 1954.

By the late 1960s, the 212 had made its way to the Detroit area, where its engine was removed and a Corvette V-8 installed in its place. In 1972, a car enthusiast spotted the Ferrari at a swap meet, paid $600 for it, and parked it in his garage in Grand Blanc, Michigan. For decades, many Ferrari historians believed that this car was irretrievably lost – a fascinating Ghia show car that survived only in black-and-white photographs.

In 2011, the Ghia-bodied 212 Europa finally re-emerged from hiding, when a collectible picker stumbled upon the long-lost Ferrari while sorting through boxes in an unkempt garage. After placing a few phone calls, Ferrari expert and successful barn-find hunter Tom Shaughnessy of Oceanside, California, learned of its whereabouts and negotiated a purchase. Once the car was secured, Mr. Shaughnessy contacted fellow Ferrari aficionado Tom Caulfield, who had owned engine number 0233 EU since the early 1970s, and agreed to buy it.

The discovery of an important early Ferrari created a stir in the classic car community, and the remarkable story was covered by numerous media outlets. The attention even attracted a new buyer for the Ghia Cabriolet, a knowledgeable Florida-based collector who had been searching for a deserving project. In late 2011, the restoration process was begun in earnest with the intention of returning the 212 to its former splendor. Over the next six years, the Ferrari was restored by a team of specialists including Beckman Metal Works, Bill Attaway, Westminster Auto Upholstery, Jens Paulsen, Rob Shanahan, and Brooke Betz. Throughout the process, every effort was made to accurately restore the 212 using existing period photos of this car and other Ghia-bodied Ferraris to properly address the minute details. “The restoration road has been long,” noted the consignor, acknowledging that “many dedicated hours and the endless collaboration between knowledgeable Ferrari experts have brought 0233 EU before you today.”

The restoration was completed in summer 2017, just in time for the Ferrari to participate in the prestigious Pebble Beach Concours d’Elegance®. In January 2018, the Ghia Cabriolet was exhibited at the Cavallino Classic, where it earned both a Platinum Award and the Wayne Obry Memorial Cup, a special honor given to the Ferrari best representing excellence in restoration quality.

Fresh from its successful appearance at Cavallino, the 212 presents in exceptional condition throughout. Included are an original manual, tool kit, and carefully organized documentation, including research data, archival photos, correspondence, and restoration records. The 212 is also accompanied by a report compiled by Marcel Massini, the noted marque historian and co-author of Making a Difference: Coachbuilt Road-going Ferraris of the Fifties and Sixties. At the time of cataloguing, an application for 0233 EU had been submitted to the Ferrari Classiche department.

Presented here is a late-production 212 Europa, with spectacular open Ghia coachwork, a period show-car pedigree, and an important connection to Gianni Mazzocchi, one of the most influential automotive tastemakers in postwar Italy. A superb example of Carrozzeria Ghia coachwork produced during the firm’s golden era, 0233 EU is among the most significant coachbuilt Ferraris of the early 1950s and a true prize for the discerning collector.