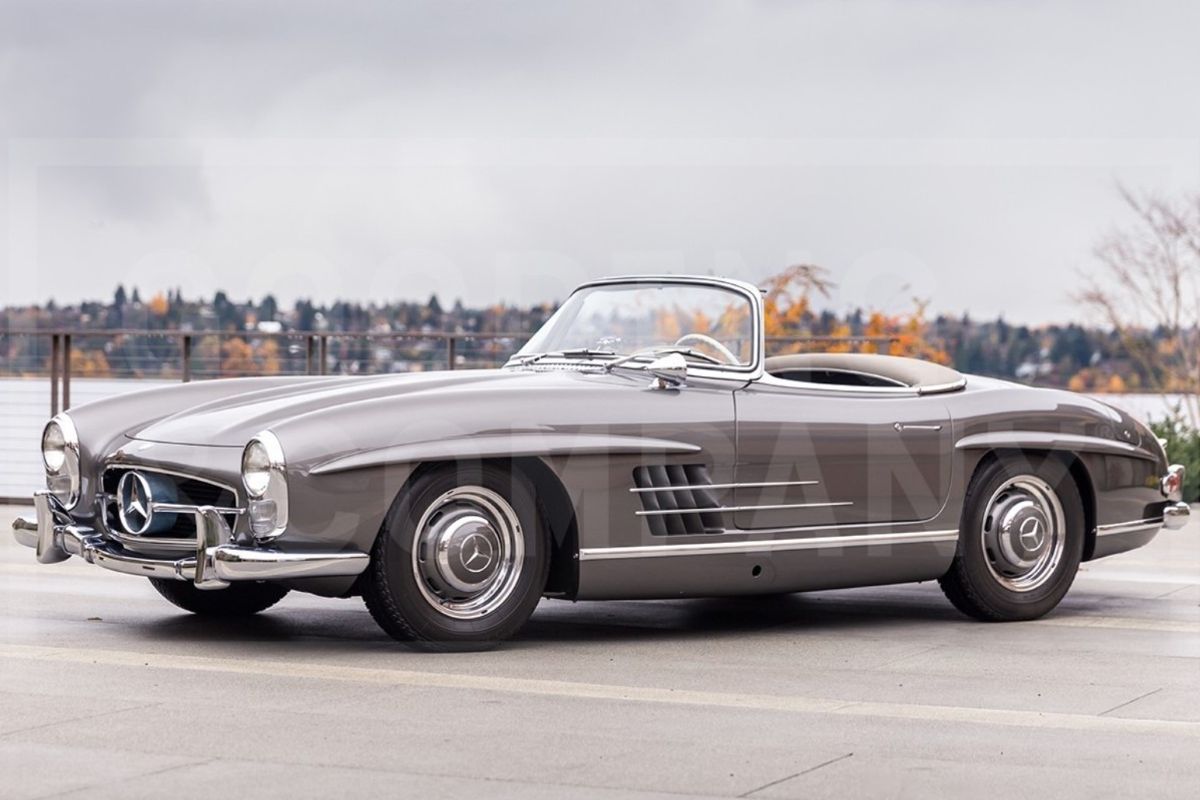 THIS CAR
In succeeding the 300 SL Gullwing in mid-1957, the 300 SL Roadster considerably refined the original model’s characteristics while improving power and handling, resulting in a car that many enthusiasts prefer to the original. Benefiting from a short chain of American caretakers over the past 28 years, this beautifully presented example displays the immaculate effects of long-term attention from one of the Mercedes-Benz niche’s most respected restorers.

Chassis 8500154 is one of 324 examples completed in 1958. According to a copy of the factory build record, the car was originally equipped with US-specification sealed-beam headlamps, a Becker Mexico radio with automatic antenna and dual speakers, and windshield washers. The exterior was finished in rare Hellblau (Light Blue, DB 334G), while the interior was trimmed with Red leather.

Ordered through the manufacturer’s distributor in London, the Mercedes- Benz is believed to have remained in Great Britain through 1981, after which it was purchased by John Wenaas of Arizona. In 2006, the car was sold to Jim Rogers, the communications entrepreneur and philanthropist from Las Vegas, who maintained a large collection of American marques. Mr. Rogers opted to sympathetically restore the interior, reupholstering the seats and doors in white leather with complementary gray carpeting, and mounting whitewall tires. In this powdery guise of light blue and white, the car was affectionately dubbed as “Liberace” by local marque enthusiasts.

Following Mr. Rogers’ passing, his collection was offered in early 2013, and in preparation, this 300 SL is reported to have received a rebuild of the cylinder head, including new intake valves, valve guides, and gaskets, and an adjustment of the cam timing.

Sold in January 2013, the Roadster passed to Mercedes enthusiast Larry Pappo, and he opted for a restoration by the highly respected marque expert Rudi Koniczek of Victoria, British Columbia. Originally trained at the Mercedes-Benz factory, Koniczek has specialized in restoring 300 SL examples for over 40 years, establishing a reputation as one of the world’s foremost experts on the model.

According to an August 2015 invoice, Koniczek’s restoration included significant work to the engine compartment, including a rebuild of the water pump, generator, and starter motor, and replacement of the oil and fuel lines, including numerous new hoses and seals. New points were installed, the valves were adjusted, and a new exhaust system was fitted. The differential and rear wheel cylinders were rebuilt, and the engine bay was refinished with period-correct hardware, while the intake manifold received the proper finish.

A new windshield was installed and all the weather stripping was replaced, the brightwork was replated, the headlamps were refurbished, and new taillight lenses were sourced. The interior received a new steering wheel, a reconditioned factory radio, and the upholstery was re-trimmed with supple gray leather and complementary carpets and floor mats. The dashboard was refinished and proper fitted luggage was sourced from the well-known specialist Taris Charysyn. The exterior was completed with a new finish in the factory color of Anthracite, completing a particularly elegant color combination. Per an itemized list, the fabulous refurbishment cost almost $190,000.

In January 2016, the beautifully refurbished Mercedes-Benz was purchased by the consignor, a West Coast-based enthusiast who has continued to maintain the Roadster’s fine state of tune. Further sorting was performed by German Car Specialists in Bellevue, Washington, and the car returned to Koniczek in March 2017 for servicing.

Now presenting in top form, 8500154 should expect a warm welcome at Mercedes-Benz events and regional concours d’elegance. The car would also make a fantastic candidate for participation on vintage tours like the Colorado Grand or the Copperstate 1000, where the Roadster’s smooth and powerful drive can be enjoyably indulged.

Such a beautifully restored 300 SL would make a fantastic complement to any collection, particularly ideal for marque aficionados or postwar sports car enthusiasts.