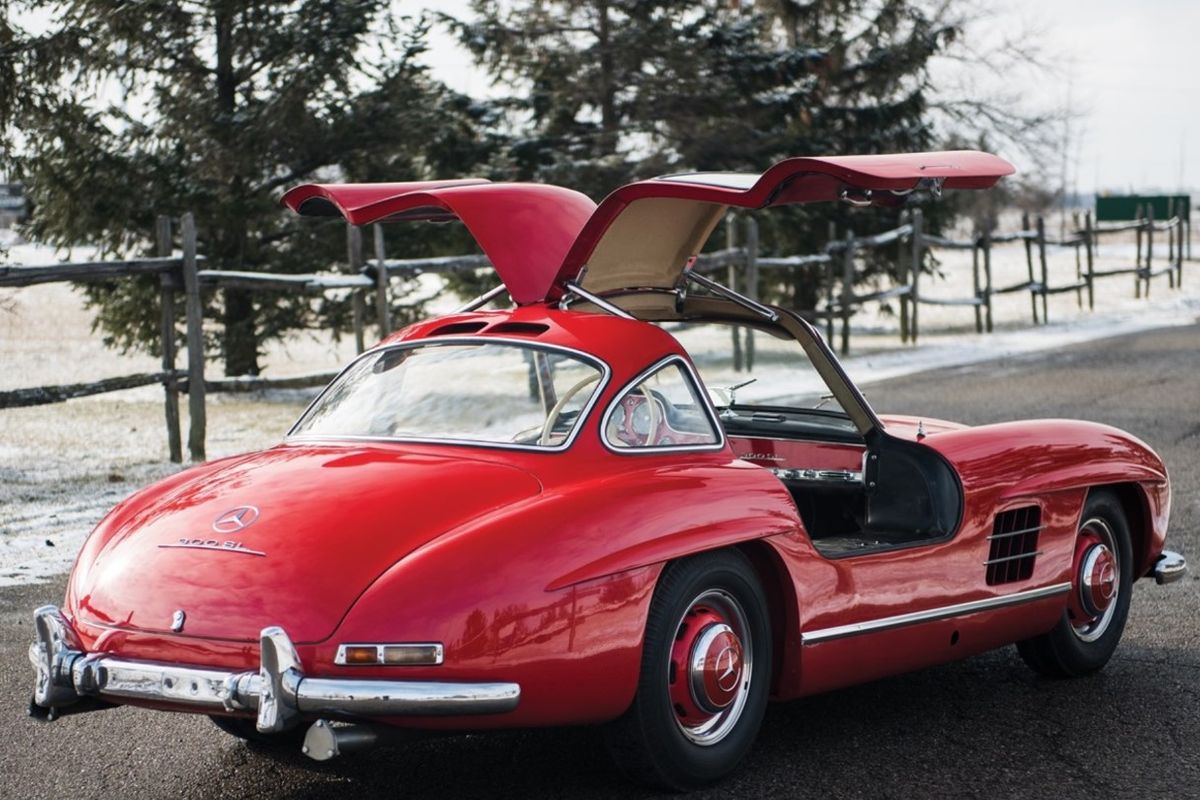 Formerly owned by noted West Coast sportsman Arthur L.W. True
A thrilling opportunity to acquire one of the most original surviving Gullwings
Please note that Internet bidding is not available for this lot. Interested parties that are unable to attend the sale may register to bid by telephone or place a commission bid online at rmsothebys.com.

Chassis number 7500071 was the fifth from last 300 SL coupe produced and, as such, has all of the most desirable late-production features, as well as the optional Becker Mexico radio and full leather upholstery. It was originally delivered to 28-year-old Donald H. Bueermann of Portland, Oregon, later passing to fellow Portland resident Howard Hanna, as recorded in Eric LeMoine’s 300 SL Register. In the early 1960s, it moved to Washington State in the ownership of young Arthur L.W. True, heir to a Spokane oil fortune and a well-known figure in Pacific Northwest sports car circles. Mr. True was a particular fan of Ferraris and is famous for his custodianship of the unrestored 250 TR, chassis number 0704 TR.
Sadly, True passed away in 1967 at the age of 35. His family subsequently donated several of his outstanding automobiles, including the 250 TR and this Gullwing, to the Henry Ford Museum of Dearborn, Michigan. The museum found the Gullwing outside their needs and, within a year, had sold it to the current owner, a resident of Jackson, Michigan.

While the owner enjoyed his 300 SL, he never had a place to maintain it in the conditions it demanded, and so it has spent its life since 1968 on display in two different museums. For the past few decades, its home has been the Special Interest Gallery of the ACD Automobile Museum in Auburn, Indiana, where it has been viewed by many hundreds of thousands of visitors to that legendary facility. In fact, for many Midwestern 300 SL enthusiasts, it was their very first “in-person” view of a Gullwing.

Such superb surroundings have helped the 300 SL survive in exceptionally original condition. Much of the Fire Engine Red finish (534) has been redone, as-necessary over passing years, but is still present on the factory hubcaps. The original Cream upholstery was quickly surface-dyed black decades ago, but remains intact, and there are no tears or scratches. All of the 36,375 actual miles recorded at the time of cataloguing were added prior to 1968. The car is still equipped with its original Michelin spare, as well as two of the three original belly pans.

Befitting its owner’s charitable mindset, 100 percent of the hammer proceeds from this sale will be donated to the consignor’s favored cause, the Jackson YMCA, as a major gift toward the construction of a state-of-the-art new building for an organization that has benefited the Jackson, Michigan, community for generations.

There are almost no other Gullwings that have survived in the condition of this car, and fewer still that have been continuously admired and beloved by so many, for so long, firing the imagination. For three decades, visitors to one of America’s foremost automotive museums have had the opportunity to envision mastering the art. Straddle the door sill. Slide in. Tuck the left leg in. Pull the door down. Fire up the canted inline six. Shift into first and go.