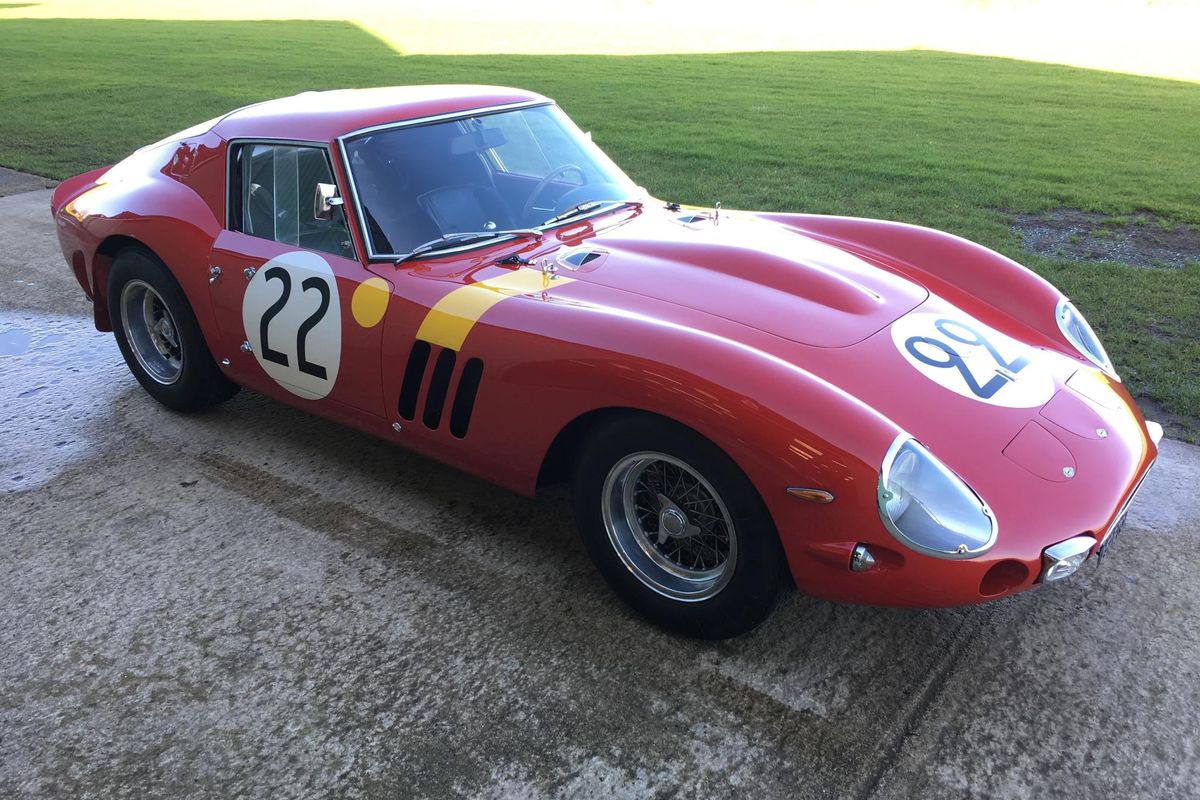 Once again, the emphasis is on displaying 50 of the world’s finest and rarest cars on the dramatic Kim Wilkie-designed grass terraces in the 5,000 acre parkland of Suffolk’s finest Georgian mansion, along with a separate aviation concours featuring some of the world’s rarest aeroplanes.

1962 Ferrari 250GTO - The 250GTO evolved from Ferrari’s highly successful 250GTO series, and consisted of a limited series of 36 cars geared to the championship of makes series regulations – hence the ‘O’ for ‘Omologato’ (homologated). This 250GTO, chassis number 3757, was completed in June 1962, and was supplied to the Belgian Ferrari racing team, Ecurie Francorchamps. The car competed at Le Mans in 1962, finishing second in class and third overall, driven by Blaton and Dernier, and that same year finished third in both the Coupe du Salon and the Tour de France. The following season it won several major races including the Spa 500km (with a new lap record), driven by Willy Mairesse. Brought to England in 1964, its next owner, Peter Clark, won twice at Oulton Park and achieved a class win at Daytona. After being restored by Bob Houghton in 1977 the car has been extensively used by Nick Mason and family. Racing at Goodwood Revival and Festival of Speed on numerous occasions, finishing second in the TT in 2011, in biblical rain. Historic Rallying is also an event this car gets used for, including the 55th GTO rally in Tuscany. The car now sits proudly, having been lightly restored by TenTenths.

1959 Maserati T61 Birdcage - Although Maserati had effectively retired from the expense of motor racing by 1957, technical director Giulio Alfieri persuaded his management to build a new sports car, using existing components for sale to private customers. Originally Alfieri had wanted a monocoque structure, but with no experience of stressed skin construction - and to help minimise costs - Maserati opted for the multi-tube frame which gave the car its nickname. The first version of the birdcage was the T60, launched in 1959 with a two litre engine and crucially, disc brakes. The T61 followed within a year, sporting a more powerful 2.9 litre engine, but identical in every other aspect. Many T61’s were simply converted T60’s with larger engines, but this car, chassis number 2457, was built new with a 2.9. It was the last car constructed in the first run of T61’s completed in 1959. The car’s original owner, a Kentucky based enthusiast called Dave Causey, had the tail modified to soften the rear deck and entered it in the Sebring 12 hour race, where it ran third until forced out by gearbox trouble. The car is owned by Nick Mason, and has been for many years. It is campaigned regularly at various historic events.

1927 Bugatti T37 Grand Prix - one of approximately 300 made, the T37 was designed for the racing voiturette class up to 1500cc and by 1927 the full Grand Prix class limited to 1500. With delightful light handling and a top speed of 95 mph, the car proved the ideal introduction to racing for many famous racing drivers and as a result is one of the most popular Bugatti cars. In 1953, the car was laid up in a barn in Suffolk until the 1980s when it enjoyed a full restoration which was completed in 2002. Today, the car competes in hill climbs culminating in capturing the Type 37 record at Prescott and is used regularly, including on tours of Ireland and the continent.

1931 Invicta Low Chassis speed model - first registered in March 1931 to a Mr John Ansell, chassis number S40 was sold to Clifford Motors in 1938 who in turn sold it on to Sub Lt T Thistlewaite of Bentley Boy fame, who passed it on to a doubtful character who fled to Malta at the height of the second world war to avoid arrest. This fine example has never been raced and retains all significant components and bodywork, including its carpet. The engine was rebuilt in the 1950’s and during this period the car covered more than 50,000 miles taking then its then owner to and from his winter home in the south of France. All mechanical components were rebuilt to original specification within the last year.

1949 Ferrari 166 Inter Superleggera - first sold to Franco Cornachia, a racing driver friend of Enzo Ferrari, in July 1948, chassis number 017 identifies it as the 17th car made at all, and the 9th road car Ferrari ever made. Given his passion for technological improvement, it is feasible to consider that Enzo tested the car himself, it being so early in the marque’s history. Its body was built using aircraft principles hence the descriptive text on the bonnet ‘Superleggera’ or super-lightweight. This example is the 4th Tipo 166 and has completed four historic Mille Miglia events. Each of the touring 166 models differs slightly from the one before and the one after it, but they all share the same Columbo V12 engine. Ferrari always considered the ‘next’ car would be better than the last and throughout his life evolution of design and performance was his focus and passion. This car is then the grandmother of all modern Ferraris and without its commercial success, for the 166 was a very successful race car between 1948-1955 with 85 outright and class victories, there would be no modern Ferraris. This is the earliest known Ferrari in the UK and last year took part in celebrations for the 70th anniversary of the marque.

1952 Jaguar C-Type - the third production car to be delivered, it was supplied to a Mr Bill Holt in September 1952 who raced it as Goodwood four days later. Despite changing hands, it continued being racing until 1960 and like many other cars of that period it was upgraded over time. At one point it sported a 3.8 litre engine but has now been rebuilt to its correct 3.4 litres. It has been in the same family ownership since 1990 who returned it to its original registration, PUG 676, in 1993 and it has been raced almost continuously since then. The C-Type bought Jaguar its first victory in the Le Mans 24-hour race. Once the XK120 had demonstrated its abilities in racing, by finishing twelfth in the 1950 Le Mans, it was clear that the company had the makings of a world-beater, so chief engineer William Heynes set to work to create a competition version - the XK120C, or C-Type, primarily for the Le Mans race. The first two cars were ready in the spring of 1951 and three cars were entered in Le Mans. During the race, two cars retired but the third, driven by Whitehead and Walker, won at an average speed of 93mph (150 km/h).

1970 Ferrari 365 GTB/4 Daytona - also unofficially known to the media and public as simply the Daytona, the 365 GTB/4 is a two-seat grand tourer produced between 1968 and 1973. Unlike Lamborghini’s then-new, mid-engined Muira the GTB/4 Daytona was a traditional front-engined, rear-drive car. Although a Pininfarini design, it was radically different from anything else and heralded an era of sharp edges for the marque. With just three owners from new, this beautiful V12 365 GTB/4 Daytona was ordered new in October 1968 by a private Yorkshire-based owner who decided in May 1969 to charge the order colour from Grigio Ferro to the dazzling Viola - the colour it sports today - when it was finally delivered in August 1970.

1974 Lancia Stratos - named after a unique, ultra-low, razor-edge show car created by Bertone, the Stratos was built to replace Lancia’s Fulvia rally car. The Stratos originally had a a 2-litre Lancia-Fiat engine, but it was not powerful enough. Instead, Ferrari’s 190bhp Dino 246 engine was chosen, a 65-degree V6 that offered tremendous flexibility. Much of the development was done by the brilliant Gianpaulo Dallara, who had previously worked on the Lamborghini Muira and De Tomaso Pantera. The mid-engined car proved to be a marvel, bringing Lancia the World Rally Championships of 1974-5-6, plus many other sports car and endurance races. The example presented at Heveningham Hall has spent time on the roads of Italy and the UK, and is in tip-top condition, ready to rally.

“Last year’s concours set a new standard in world-class entries displayed on the terraces with top honours in the pre-war category going to a 1935 Frazer Nash twin-supercharged single seater, a 1966 Ford GT40 in the post-war category and a 1971 Lamborghini Muira in best supercar plus an exacting recreation of a 1918 Sopwith Snipe winning the aviation concours,” said Max Hunt, chair of the judges. “This year we are pushing the bar even higher with some exceptional early entries with many more to come.”

Heveningham Hall’s concours takes place at the same time as the annual country fair which typically sees around 20,000 visitors descend on the historic estate for main ring events, aerobatic displays, shopping, local crafts and much, much more. Each year the Heveningham Hall Country Fair Trust distributes all proceeds to local charities

Each of the three classes in the motorsport concours plus the aviation concours will be judged by a panel of world-class experts including Professor J Mays.
An entirely new event has also been launched for 2018: Horsepower Hill will provide an opportunity for concours’ owners and specially-selected guests to burn rubber in their own cars in a timed burnout in the heart of the Capability Brown-designed landscape.

The Heveningham Tour also returns following a successful inaugural event in 2017 that saw around 25 concours’ owners and guests - including a 1951 Ferrari 212 Barchetta, 1985 Lancia Delta S4 Corse and 2017 Ferrari LaFerrari Aperta - make their way through the glorious Suffolk countryside before stopping for a ‘Hillbilly’ BBQ and clay-pigeon shoot. This year’s Heveningham Tour returns on Friday 29th June and the route - which will take in Suffolk’s renowned Heritage Coast - will be announced shortly.

Once again, the Concours d’Elegance - which sees all proceeds raised going to charity - is in association with auctioneers Bonhams, British watch manufacturer Bremont and English winemaker Gusbourne. The concours is also again teaming up with the Royal College of Art and the Heveningham Hall Concours RCA Automotive Design Scholarship will see a student awarded a scholarship to cover fees and living expenses to cover the 15 month MA Automotive Design course in London under the auspices of Professor J Mays. The event has also funded a dementia unit locally this year.