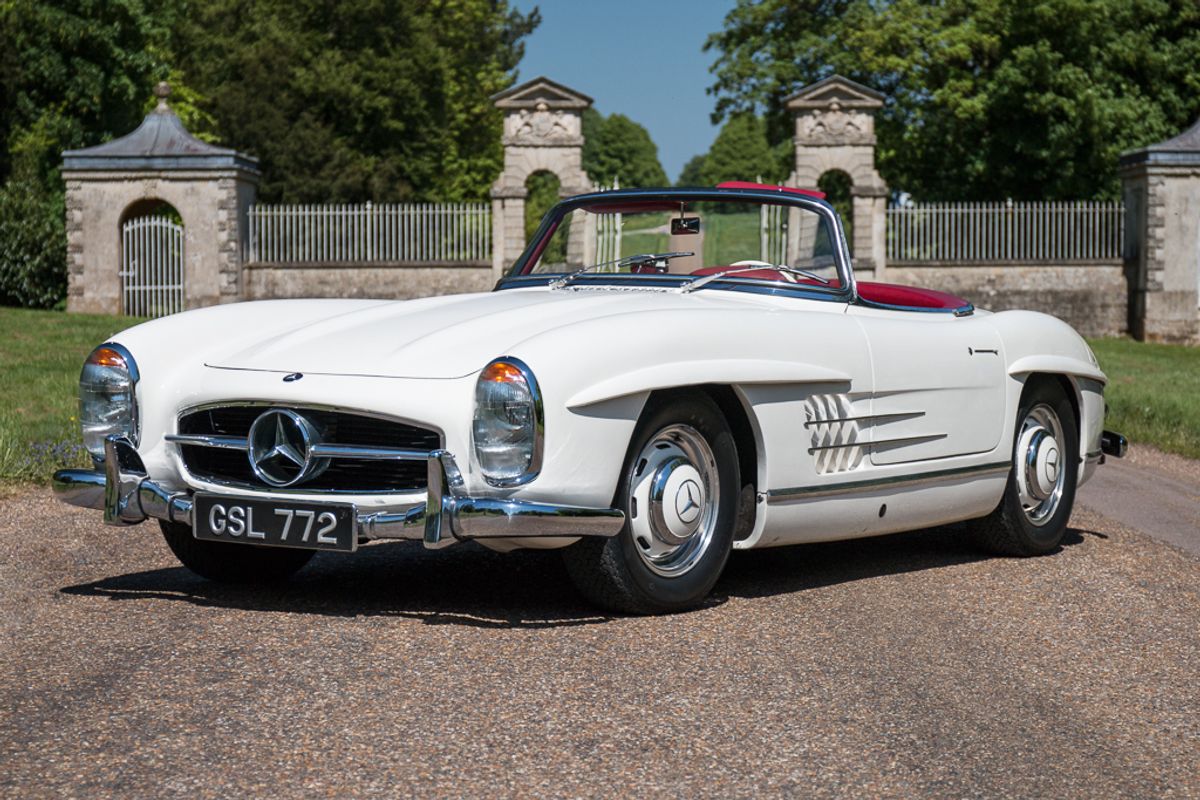 A gorgeous 1958 Mercedes 300SL Roadster has been confirmed as the first entry into Silverstone Auctions’ Silverstone Classic Sale which will take place on the 21st and 22nd July as part of the world’s biggest classic motor racing festival.

One of only 1,858 Roadsters ever built, this 300SL underwent a full restoration when it arrived in the UK in 1999. One of only two UK Mercedes-Benz engineers invited to Germany to be factory trained on the 300SL from launch completed the restoration and the stunning motor car will now be offered for sale with an estimate of £700,000 to £800,000.

“The 300SL Roadster is a timeless classic, as beautiful now as it was 60 years ago,” says Nick Whale, managing director of Silverstone Auctions. “It has stood the test of time as one of the earliest and greatest race bred road cars. Its complex mix of engineering and beauty make it one of the most respected road going classics ever made so it is fitting that we have the pleasure to offer it at the Silverstone Classic in July.”

This early 300SL Roadster was supplied new to the USA in 1958 and remained there until it was imported and sold to the current owner, a distinguished member of the BRDC, by Brian Classic. On arrival in the UK in 1999 the 300SL was given a thorough restoration, with the engine and gearbox entrusted to Ron Waghorn, one of two Mercedes engineers trained on the 300SL at launch. Ex-McLaren engineer Kerry Adams was tasked with the metal fabrication for the body and frame, and APR Cars of Ruislip were responsible for the bare metal repaint in the Roadsters original Cream. Meanwhile the interior was accurately retrimmed in red leather by Morris McDonald. The entirety of the restoration was completed in 2001 and an extensive photographic record of the process is included in the vehicle history file.

Since the restoration was completed in 2001, the car has covered a total of 9,000 miles all across Europe including Scotland, France, Italy, Jordan and Monaco bringing the total mileage to just over 89,000. Throughout this time the car has been maintained by Ron Waghorn until his retirement in 2007, with maintenance then being given to Tommy Johnston, the only other man invited to Germany to train on the 300SL at launch, until his retirement in 2011. The car is now maintained by the highly respected Neil Corns of Omega Motorsport who ensured the injection fuel pump was rebuilt last year at HK Engineering in Germany as part of its annual maintenance programme at a cost of 13,800 Euros.

The car is finished today in its original colour scheme of Cream with red leather and comes complete as a matching numbers car with its original engine, gearbox and rear axle. This is a rare opportunity to purchase an exceptional car with great patina and perfect provenance.