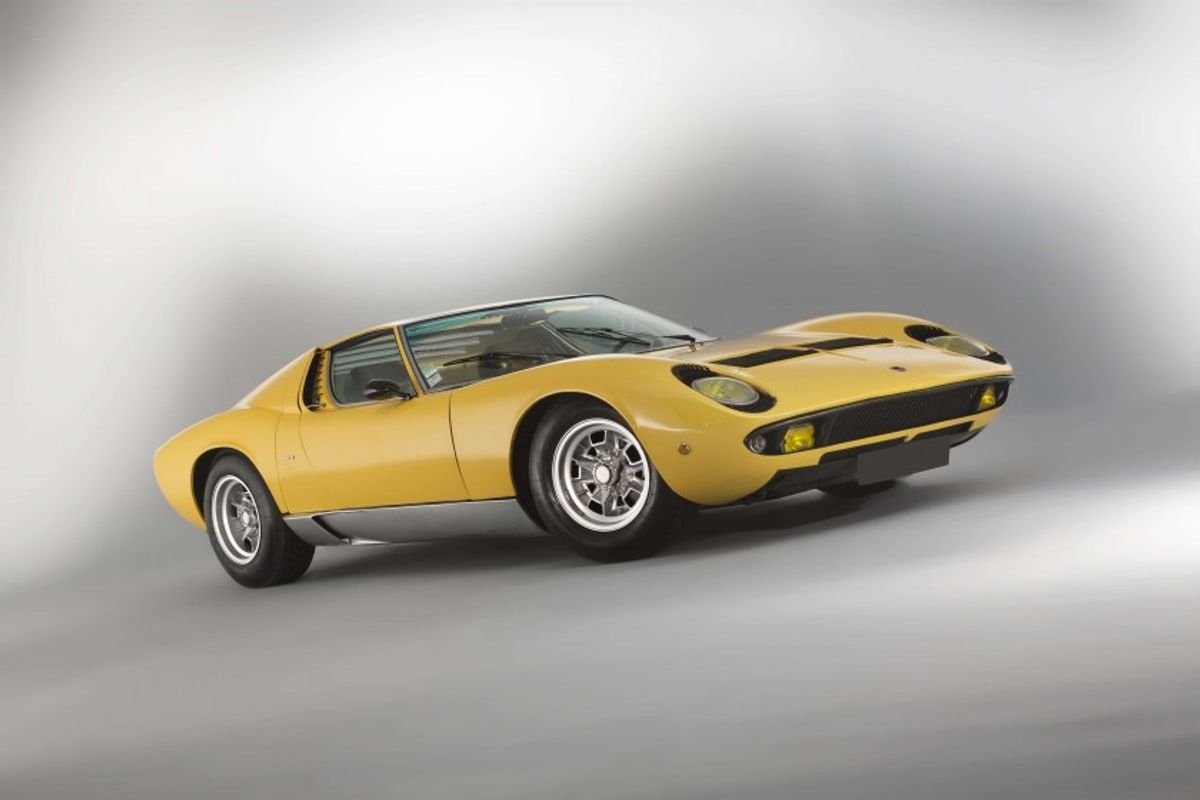 Ferruccio Lamborghini claimed he wasn't interested in racing and said he would never build a race car. However, when he unveiled the chassis of the future Miura on his stand at the Turin Motor Show in 1965, it appeared he had changed his mind : its construction using perforated, steel plates looked to have been designed with a competition model in mind. The chassis on show had been built by Giampaolo Dallara, Bob Wallace and Paolo Stanzani in their spare time, without Ferruccio's knowledge. They were keen to make him think again about racing, and presented him the result of their work in November 1964. Ferruccio was enthused : this would become an exhibition car.

He entrusted the making of the bodywork to Bertone, where a young designer called Marcello Gandini was put in charge of the project. These men went on to produce one of the greatest ever sports cars, that has turned more heads over the years than any other car. In their search for precision and a certain classicism, Ferrari and his favoured coachbuilder, Pininfarina, placed great emphasis on aerodynamic studies. Bertone, with Gandini, on the other hand, allowed inspiration to rule.

During testing by Bob Wallace on the back roads of northern Italy, the prototype 0509 was destroyed. Three other cars would be tested before Bertone and Wallace found a way to reduce the heat and noise in the cockpit, during which time the orders rolled in. The first car to be sold, chassis 0979, was delivered in March 1967. The name of the car comes from the well-known breeder of fighting bulls, Don Eduardo Miura, made famous by Hemingway.

This early model was then replaced by the 400S, with the first example, chassis 3919, leaving the production line on 29 January 1969. It had an extra 20 hp but weighed 200 kg more. The final evolution, the Miura SV, appeared in 1971 at the Geneva Motor Show, with 15 hp more power than the S and 65 kg heavier. The Lamborghini Miura is a fitting tribute to both Don Eduardo Miura and Ferruccio Lamborghini, for surely a car has never lived up to its name so well. The Miura bulls identify the truly talented toreadors, in the same way the car of the same name selects its drivers. Men who take part in a Miurada know they are in for a demanding afternoon. This is also the case for those stepping into a Lamborghini Miura, a car that has not been tamed or sanitised. Like Don Eduardo's bull, there is no compromise, making this an enthralling, romantic machine.

This Lamborghini Miura P400, chassis number 3649, is equipped with engine S n°2211. It left the factory in Sant'Agata on 7 August 1968. Sold new in France, it arrived at the premises of Voitures Paris Monceau, 114 Rue Cardinet Paris 17e, on 16 September 1968. It was painted silver grey with mustard leather interior and electric windows. The car had been so successful since its launch at the Motor Show in October 1966 that by September 1968, the list of clients driving round in a Lamborghini Miura included Johnny Hallyday, the singer Christophe, the journalist Philippe Bouvard, Jacques Dutronc, the businessman Fred Lip and other Parisian luminaries. With a devastating performance and stunning looks, the Lamborghini's new creation sold very well.

The importer Voiture Paris Monceau registered 3649 in the company name, and the car was given the registration 4600 VA 75 on 25 September 1968. For the next 12 months, it was used to take selected clients on test-drives and demonstration runs. On 19 September 1969 it was sold to its first owner, an enthusiast for Italian cars who lived in the Essonne department, who registered the car 972 LR91.

On 25 May 1971, it was acquired by its second owner, a hairdresser based in Martigues, near Marseille. He bought the car on credit, and when he destroyed the engine, he didn't have the financial means to have it replaced. He stopped making repayments and the bank seized the car and sold it at auction. Monsieur Muscinesi, a well-known figure in Marseille at that time, bought the non-driving Miura in the name of his company Muscinesi (a copy of the extract from the prefecture of Marseille is included in the file).

He sold it shortly afterwards to a mechanic working in the old port in Marseille, who owned a 400 S that he had written off in a hillclimb. He put the engine from his 400 S into the Miura along with certain other elements including the electric windows and big brakes. The car then sold to a certain Marc Harchier followed by two other owners in France, and was registered in Mulhouse, in 1987, with the number 400 UE57. In 1994, the Miura was found for sale with the Ferrari dealer in Mulhouse, painted green with its original mustard interior. On 3 April 1998, the dealer sold the car to the previous owner, the ex-President of Club Lamborghini France. He entrusted the Miura to the expert care of marque specialist and renowned mechanic Toni Sisinni, who completely rebuilt the engine, gearbox and axle in 2003.

The previous owner drove long distances regularly and wanted a car than was mechanically perfect and totally reliable. The oil has been changed every 5000 km. The brakes (discs and pads) were changed and the suspension refurbished in 2013, and the alternator belt, fragile on this model, has been changed regularly as a precaution. All the invoices will be passed on to the new owner. In October 2013 the car sold at an Artcurial auction to the current Parisian owner, an enthusiast for GT and supercars from the 1970s and 1980s. He has driven it regularly in various rallies and is now selling the Miura, having had the engine entirely rebuilt and other major work carried out, by Toni Sisinni, for a sum of around 75 000€ (copies of invoices will be made available to interested buyers on request).

Today, the car is presented in flawless condition. We satisfied ourselves of this in a recent test-drive and are assured by its provenance. We are very familiar with the cars belonging to the vendor and the high standards he has for all of them. It will be delivered with a history file and numerous invoices.