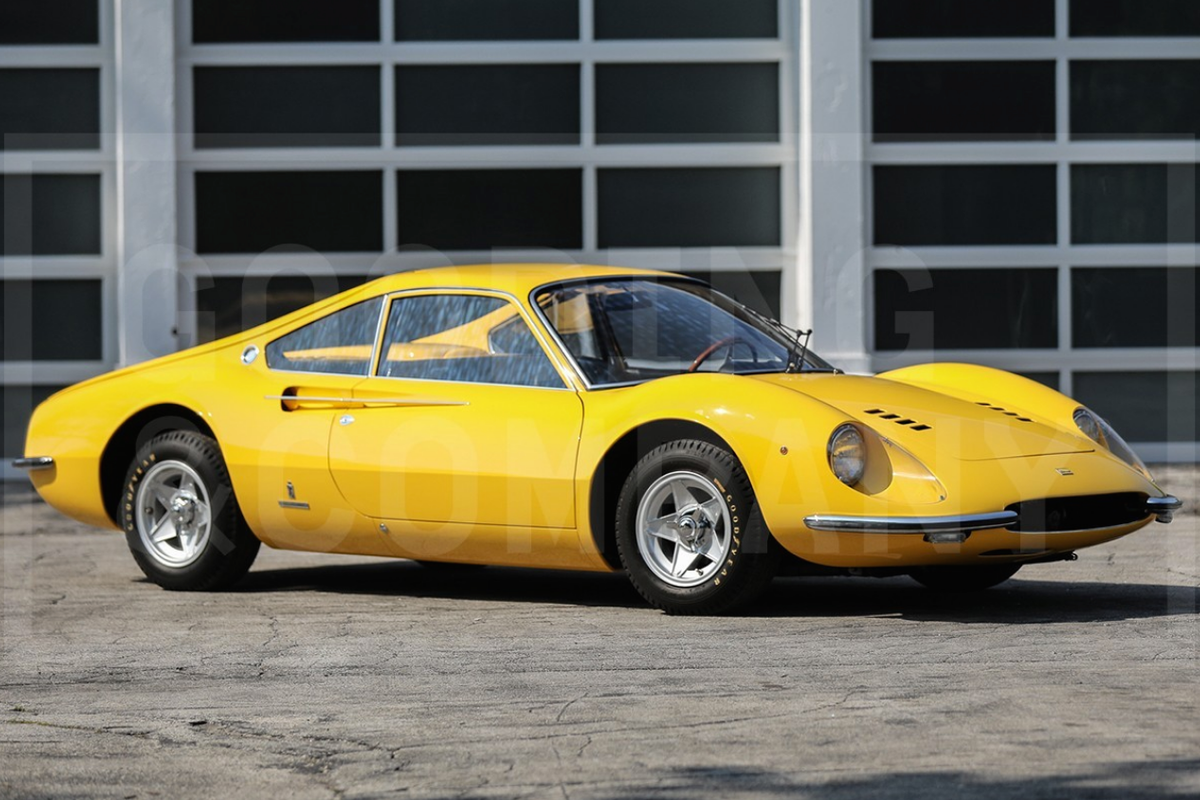 The Second Ferrari Dino Prototype Built by Pininfarina
Pre-Production Chassis with Longitudinal Tipo 135B Engine
Displayed on the Ferrari Stand at the 1966 Torino Motor Show
Well-Documented Provenance; Retained by One Owner for the Past 25 Years
An Important One-Off Featured in Numerous Books on the Marque and Model

THIS CAR
Alfredino “Dino” Ferrari, Enzo Ferrari’s first son, had a profound, lasting impact on the future of his father’s company. In the mid-1950s, Alfredino, along with engineer Vittorio Jano, persuaded Enzo Ferrari to develop a line of Grand Prix cars with V-6 engines. Unveiled in 1957, less than a year after Dino’s death at age 24, the 246 Grand Prix was an immediate success. Not only was it the first V-6-powered car to win a Formula 1 race, it was among the last of the winning front-engine cars, carrying Mike Hawthorn to the World Drivers’ Championship and Ferrari to 2nd Place in the Manufacturers’ Championship.

In 1961, the V-6-powered 156 F1, Ferrari’s first mid-engine Grand Prix car, won the International Cup for Manufacturers. Consequently, the first mid-engine Ferrari sports prototype – the 246 SP – was built around a Grand Prix-derived 2.4-liter V-6. In early 1965, Carrozzeria Pininfarina began to develop concepts for a road-going Ferrari Dino, based on a new two-liter V-6 engine built in collaboration with Fiat. Sergio Pininfarina and Leonardo Fioravanti quickly settled on a mid-engine arrangement, taking their inspiration from Ferrari’s contemporary Dino sports racing prototypes. A mid-engine placement would also distinguish the Ferrari Dino from the new Fiat Dino – a front-engine GT.

In May 1965, Pininfarina designer Aldo Brovarone produced a sketch that would serve as the basis for the Ferrari Dino – a short-wheelbase, two-seat coupe, with aerodynamic lines and beautiful, rounded-front fenders.

Pininfarina’s first prototype, known as the Dino Berlinetta Speciale, was unveiled at the Paris Auto Salon in October 1965. Built on a Tipo 585 competition chassis, numbered 0840, the magnificent Berlinetta Speciale was truly a sight to behold, though it made few concessions to roadability. It was impossibly low, had minimal interior space, and did not run. After the Paris Salon, Pininfarina continued to develop a Dino concept that was more likely to be used in production. Its efforts resulted in the car presented here, the Dino Berlinetta GT.

Constructed in 1966, the Dino Berlinetta GT was the first mid-engine, six-cylinder Ferrari designed – from the outset – for use as a road car. Using a Tipo 599 chassis as its foundation, Pininfarina created a stunning new design that combined the principle characteristics of the original Dino Berlinetta Speciale with the new three-seater 365 P Berlinetta Speciale, also developed in 1966.

Certain elements of the design were carried over from these two Pininfarina concepts, such as the sharp crease that ran the length of the body and the long one-piece engine lid hinged at the trailing edge of the roof panel, just aft of the passenger compartment.

Other features forecast the look of future Ferraris. For example, the section of curved glass behind the passenger compartment was brought into production with the Dino 206 GT, and the rectangular taillight assemblies, each with three small circular lights, were later seen on Ferrari’s 365 GT 2+2 and 365 GT4 Berlinetta Boxer.

A state-of-the-art design for its era, the Dino Berlinetta GT was unmistakably the work of Pininfarina and featured iconic Ferrari design cues such as the traditional oval-shaped grille and covered headlamps. Even the extraordinary flying buttresses, which seamlessly rise up from the tail to form the roof section, recall some of the great custom-bodied Ferraris of the mid-1950s. The one-off Ferrari was finished with a Dino badge on the nose, Dino GT lettering on the tail, and the classic Pininfarina “crown” placed on each side, just ahead of the rear wheels.

Painted in vibrant Fly Yellow, the Dino Berlinetta GT showcased many unique features, each demonstrating Pininfarina’s mastery of and attention to detail.

Unlike the Berlinetta Speciale, the Berlinetta GT was conceived as a fully functioning automobile, suitable for customer use. As such, the cockpit layout was a major element of the design, and it was beautifully finished with a classic three-spoke Nardi steering wheel, complete instrumentation, and black leather upholstery, highlighted by blue cloth trim on the seat cushions and door panels.

Although designed as a road-going sports car, the Dino Berlinetta GT did possess a number of important details that speak to its motorsport origins. Its engine, a production Tipo 135B two-liter V-6, was mounted longitudinally, as in the contemporary 206 S racing car. Similarly, exterior features, such as the outside fuel filler, five-spoke cast-aluminum Campagnolo wheels, Firestone tires, and large single windscreen wiper, were features seen on Ferrari’s contemporary sports racing and Formula 1 cars.

Finished in October 1966, the Dino Berlinetta GT was presented on the Ferrari stand at the Torino Motor Show in November and marked a major turning point in the company’s history.

Although Pininfarina’s Berlinetta GT represented a considerable advancement toward a production-ready Dino, Enzo Ferrari demanded that a major change be made before the design was finalized. He tasked the project’s lead engineer, Angelo Bellei, with mounting the engine transversely rather than longitudinally. In 1967, Ferrari unveiled its production Dino, the 206 GT, which was built on a Tipo 607 chassis with its two-liter V-6 mounted transversely, as Il Commendatore wished.

According to the research of historian Marcel Massini, Ferrari officially completed the Dino Berlinetta GT on December 1, 1966. In 1967, the one-off car was assigned a production 206 GT chassis number, 00106, and was sold to its first private owner, Tullio Lombardo of Napoli, Italy. Sig. Lombardo kept the car until 1968, when it was sold to well-known Ferrari enthusiasts Charles Betz and Fred Peters of Orange, California. Mr. Betz and Mr. Peters sold the car to Harold Austin, who in turn sold it to Dr. Eli Mishuck of Arcadia, California.

In 1970, Carle C. Conway III of New York purchased 00106 from Dr. Mishuck. An avid car enthusiast, Mr. Conway served as president of the Ferrari Club of America from 1979 to 1983 and owned several significant classic Ferraris, including the 412 MI, a 312 P, and two 250 GTOs. During his ownership, the Dino was repainted silver gray and pictured in several books, including Stan Grayson’s Ferrari: The Man, The Machines and Jean-Pierre Gabriel’s Dino: Les Autres Ferrari (The Other Ferrari). Mr. Conway kept 00106 until 1986, when it was sold to noted collector David Cohen. Mr. Cohen shipped the Dino to his home in South Africa, enjoyed the car on several rallies, and then brought it with him when he moved to West Vancouver, British Columbia. In early 1993, he sold 00106 to Southern California Ferrari specialist Michael Sheehan, who then restored the Berlinetta GT and presented it at the Pebble Beach Concours d’Elegance® that August.