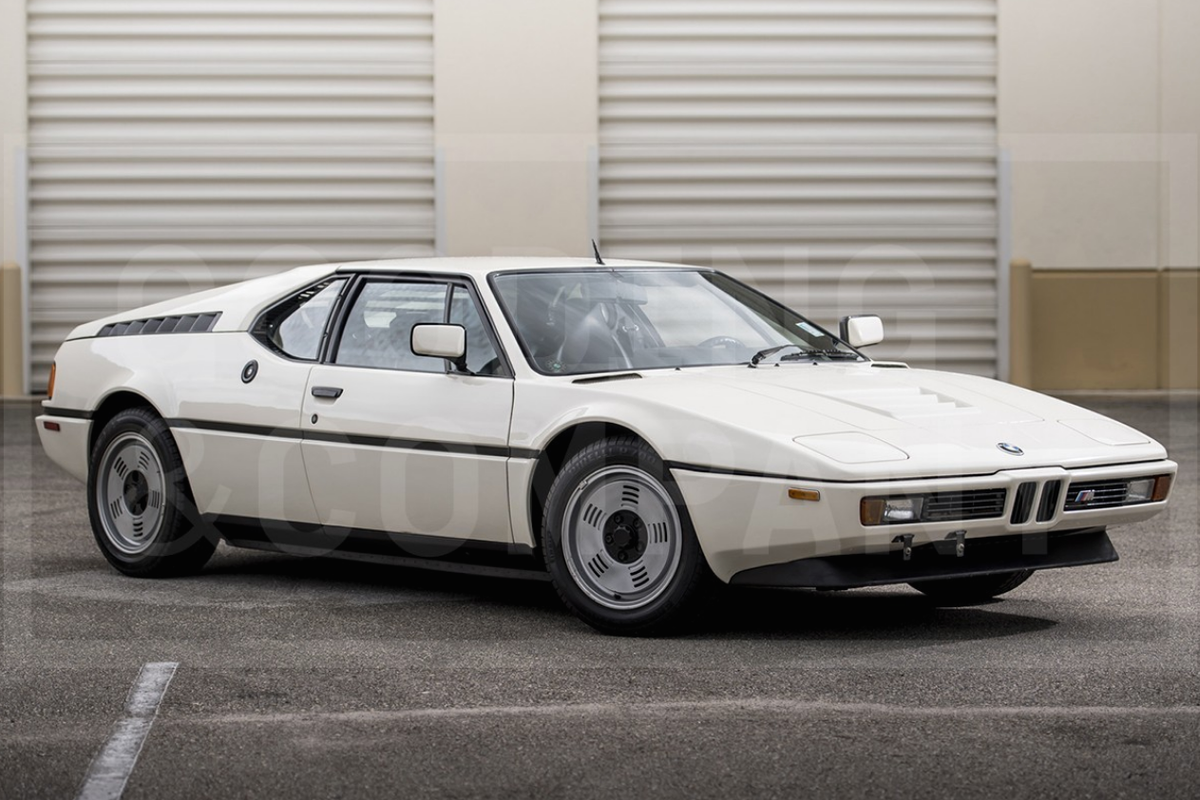 THIS CAR
The M1 was conceived as a way for BMW to compete in FIA Group 4 sports car racing, which was then dominated by Porsche’s turbocharged 911. With 400 homologation units necessary, the M1 was designed by Giorgetto Giugiaro and his team at Italdesign, with a mid-engine, tube-frame chassis developed by Lamborghini. Inspired by the 1972 BMW Turbo concept, the M1’s fiberglass aerodynamic wedge shape was more Italian than Teutonic, but retained BMW’s iconic “twin-kidney” grilles. It featured a driver-focused interior, unique Campagnolo wheels, and was powered by a sublime 3.5-liter engine derived from the legendary 3.0 CSL.

This wonderful 1981 example remains in its original colors of white over a black leather interior with white and black seat inserts, a stunning combination that highlights the purity of Giugiaro’s design. A late-production, German-delivery example, this M1 was imported into the US in 1984 via Bavarian Motors of Cincinnati, Ohio. A 1989 Bill of Sale from Isringhausen Imports of Springfield, Illinois, documents the M1’s sale to its current owner, a passionate enthusiast. The consignor registered the car with the BMW M1 Club and used it sparingly, servicing it at Berlinetta Motorcars of Huntington Station, New York.

In November 1993, the consignor diligently had Berlinetta Motorcars prepare the M1 for static storage, then showing just 23,656 km, where it remained for the next 25 years. In June 2018, the BMW was awakened by renowned BMW specialist The Werk Shop, of Libertyville, Illinois, with selective work to the fuel system, brakes, clutch, and engine. After this gentle recommissioning, The Werk Shop was impressed with the way the car ran and drove, though, as with any automobile from long-term storage, further mechanical work will be required as the M1 continues to stretch its legs following its slumber. Sometime after 1993, the odometer stopped functioning, showing 23,667 km.

Today, the M1 remains in highly original, unrestored condition. The consignor confirms that no paintwork was ever performed in his ownership, and the M1’s cosmetics display the inviting and charismatic light patina of an unrestored car. The interior remains very well preserved, still fitted with the Alpine head unit and Blaupunkt speakers present upon the consignor’s purchase in 1989. Numerous factory BMW and German-language stickers remain, as does its date-stamped original manual, tool roll, and records, as well as inspection markings on the coil springs and gearbox.

Offered after nearly 30 years of single ownership, this M1 stands out for its conscientious and original presentation. With very few unrestored cars available, it is fantastic to see an example such as this, with such genuine character, preserved and left untouched. Offered without reserve, this is an appealing M1 worthy of close inspection.