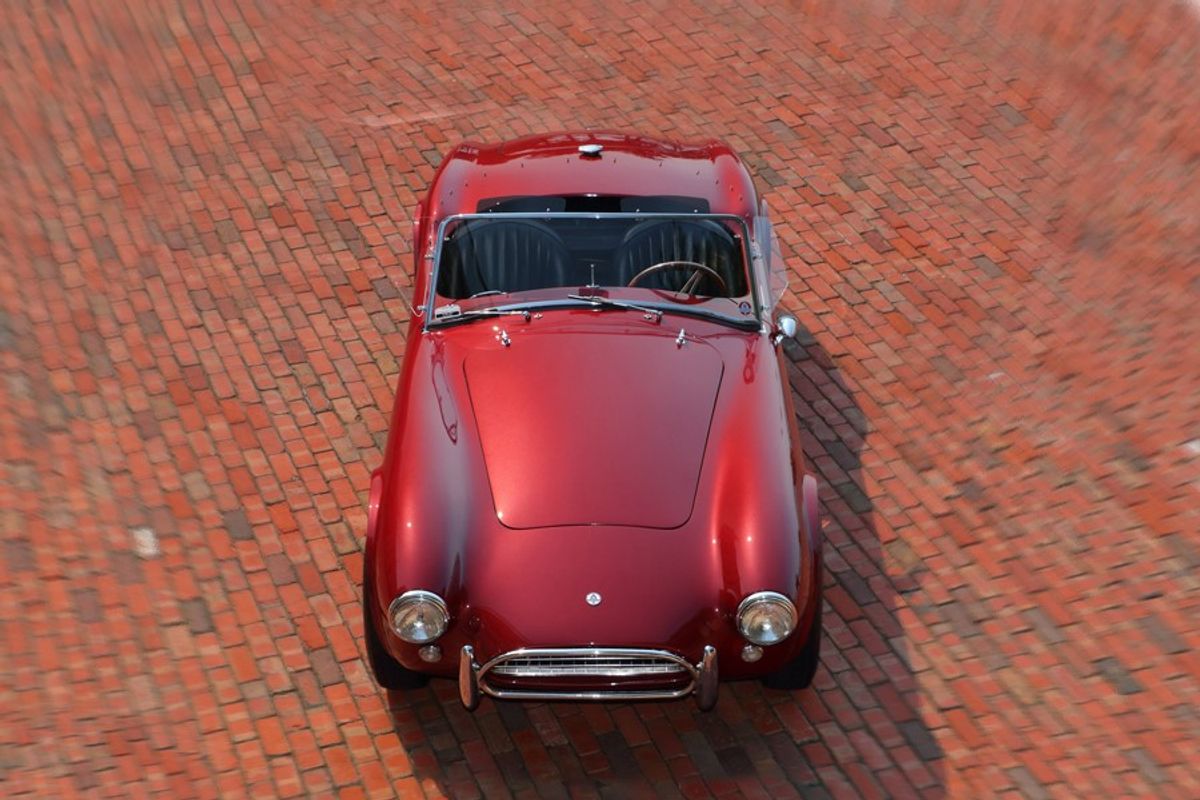 CSX2588, The last Shelby 289 Cobra sold to the public and second-to-last built, the latter CSX2589 having been retained by Carroll Shelby and his family since new
CSX2588 is the last 4-speed 289 Cobra Roadster built, CSX2589 was fitted from new with an automatic transmission for Shelby
CSX2588 retains its original chassis, body, engine, and drivetrain
289 CI 'HiPo' V-8 with aluminum intake and Holley 715 CFM 'LeMans' carburetor
Professional repaint in its rare original color, Rouge Iris (Maroon) in 2006
One of 56 Leaf Spring Cobras finished in Rouge Iris
Optioned with "Class A" accessories from new
Delivered new to Vel's Ford Sales in Torrance, CA by Don McCain of the Shelby marketing office
Sold new to A.L. Gassaway of Long Beach, CA
The next known owner was Barry Hauge of Burbank, CA in 1975
Hauge sold the car to Peter Sidlow of North Hollywood, CA in 1981

Part of a 17 car liquidation auction on behalf of the FDIC at the Imperial Palace Hotel in Las Vegas, NV in 1993 to a new owner who would keep 2588 for 13 years
Then purchased by noted Shelby expert and historian Colin Comer of Milwaukee, WI in 2006
Comer performed a professional repaint in the original Rouge Iris color and sorted the car mechanically

Opportunities to own truly significant automobiles can ofttimes prove fleeting, and the availability of CSX2588 could be a landmark sale this year. That is because CSX2588, constructed in 1965, is the very last 289 Shelby Cobra sold new to the public and second-to-last example built, the latter having been retained by the Carroll Shelby family since new. It is also the last 4-speed 289 Cobra Roadster built, as the final car CSX2589 was fitted from new with an automatic transmission personally for Carroll Shelby. CSX2588 is complete with its original chassis, body, engine and drivetrain, and though mechanically sorted, has never required a full restoration. Indeed, the car is very correct with the steering wheel, gauges, original exhaust manifolds, radiator and the like all there. One of 56 leaf-spring Cobras finished in Rouge Iris, it was professionally repainted in its rare original color back in 2006 during ownership by expert Colin Comer, who also sorted it mechanically and installed new carpeting. CSX2588 retains its 289 CI Hi-Po V-8 with aluminum intake and Holley 715 CFM LeMans-design carburetor and was optioned with "Class A" accessories from new; weather equipment includes the original side curtains, top frame and a new tonneau cover. This stunning car was delivered new to Vel’s Ford Sales in Torrance, California, by Don McCain of the Shelby marketing office, and stayed in California until 1993, when it was sold at auction in Las Vegas during an FDIC liquidation in 1993. Comer bought it from the succeeding owner in 2006 and performed the minor refreshing. It has been professionally maintained ever since, participated in Tom Cotter’s Cobra 1000 Rally in 2010 without incident and is fully documented in the SAAC’s Cobra World Registry. Today Comer notes, “This is a great car, and one that I've always regretted selling." CSX2588, the last 289 Cobra sold to the public, offers an unparalleled opportunity to own an exclusive Shelby icon.