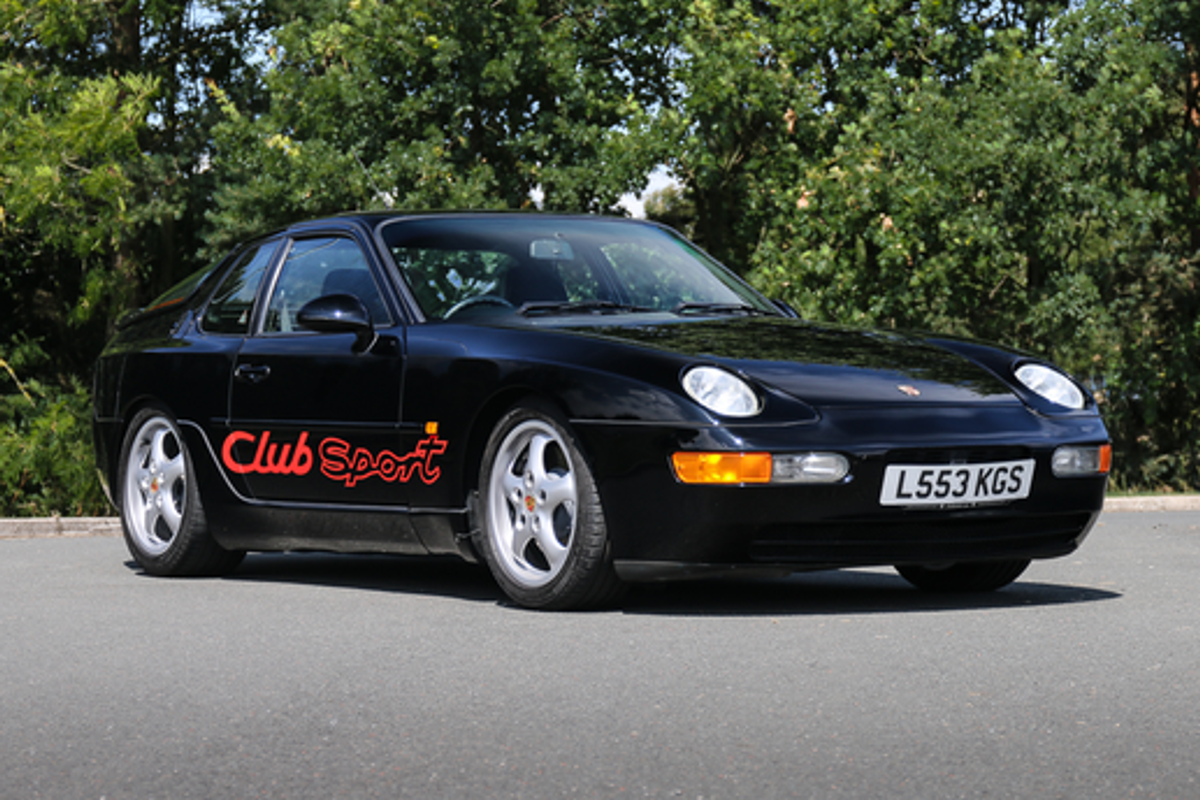 A UK-delivered (C16) 'Club Sport'. 1 of just 179 RHD UK examples
Comprehensive history file. Porsche Certificate of Authenticity
Invoices totalling £18,000 on maintenance and servicing
Full book-pack, complete Porsche tool-kit, all keys and immobiliser fobs, original spare wheel
A verifiable mileage of only 61,000 miles
Long-term Porsche devotees will be all too familiar with the 968, introduced to the world back in 1991, and as it turned out, was to be the end of the line for Porsche’s enduring front-engined four-cylinder model line.  The 968 was developed directly from the 944, which meant adopting its well-honed and well-proven running gear, whilst presenting a fresh design aesthetic that made it feel like a significantly new model.

The standard 968 was a great all-round sports car, but as a last ‘hurrah’ to this enduring lineage Porsche wanted to create a car tailored more for the pure enthusiast and, in particular, one that would excel in competition.  In late 1992, the 968 ‘Club Sport’ was introduced and, whilst it was mechanically identical to the standard 968 and shared the same 3.0-litre engine (producing 225lb-ft of torque and 240bhp) and 6-speed gearbox, it differed in a number of important ways.

This track-focused run-out model adopted the philosophy of ‘less is more’ by removing all luxury-related equipment from the basic build specification.  With the no-frills approach, less weight, and clever suspension, Porsche could now focus media attention on the Club Sport's fast road and track abilities.  As soon as the press got hold of the Club Sport and discovered what a brilliant drivers’ car it was, the credibility of the 968 went through the roof.  Even Walter Röhrl reckoned it was the best handling car that Porsche made.  The CS achieved a 'Performance Car of The Year' award in 1993 from Performance Car magazine in the UK.

In total, just 1,923 CS examples were produced worldwide, of which only 179 were UK right-hand drive models, making the Club Sport a very rare Porsche indeed.  There has been, over the years, a misconception in the motoring press that Club Sports are only Club Sports if they have bucket-seats, wind-up windows, no sunroof, manual hatch, etc., however, the Club Sport was available to order with any number of options - and indeed it frequently was.  It's very common to see Club Sports with Recaro cloth comfort sport front seats, electric windows, sunroof, air conditioning, and even rear seats whilst still sporting the 'Club Sport' badge - especially in parts of Europe and Australia.

The car presented here is a C16 (UK-delivered) right-hand drive 1994 Porsche 968 Club Sport.  Its CS status is confirmed by its specification, chassis number and accompanying Porsche Certificate of Authenticity.  This striking example, in the much sought-after combination of Black paintwork with red decals, was first registered on 6th June 1994 and pre-delivery inspected and delivered by HR Owen on 11th July 1994.  This particular CS was ordered new with black Recaro cloth comfort seats, central locking, and an electric sunroof.

The car has covered just 61,000 miles and presents extremely well. According to the vendor it drives as well as it should too, adding that the engine idles quietly and accelerates smoothly, and the gearbox is said to feel exactly as it should swapping cogs with the precision you’d expect from a Porsche.

The mileage is supported by a comprehensive history file, demonstrating that the car has been maintained to strict standards throughout its life, as evidenced by invoices totalling circa £18,000.  The file indicates that the cambelt was replaced at 47,000 miles, along with the balance belts and PAS belts.  A new clutch and a new dual mass flywheel were fitted at the same time and additionally, the alternator has been replaced and new gearbox mountings fitted.  Other recent work has involved a new windscreen and the steering rack and pump being overhauled.

Rarely do you come across one of these legendary 968 CS models that is such a complete package.  Details like a full book-pack, a complete Porsche tool-kit, all keys and immobiliser fobs, and an original spare wheel help support this dutiful ownership.

The 944, the 968 and even the 928 are seeing their values rise in the wake of the '911 explosion' and front-engined Porsches are having the Renaissance they richly deserve. This is simply a lovely genuine example of arguably the most coveted front-engined Porsche model and, competitively guided, opens the door into a very exclusive club.